Release Blitz with Giveaway: Anything Once by Meka James 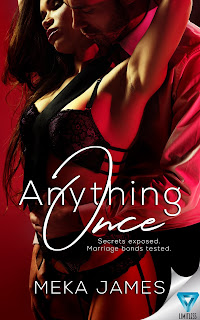 Quinn has been happily married for ten years. Her relationship with Ian is built on love, trust, and honesty. At least that's what she thought...until a four-letter word changed everything.
P.O.R.N.
After finding her husband alone in a rather awkward situation, Quinn starts to question her beliefs about their marriage.
While they've always had a healthy sex life, it was far from adventurous. She loves her husband, and he loves her, but the revelation allows worries to mount, and insecurities to grow.
After having a candid conversation with Ian, Quinn realizes that it all boils down to one very important question.
Is she willing to try anything once?
The answer is...yes. 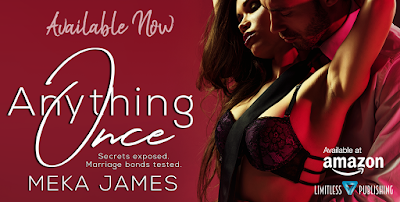 Quinn wrapped her arms around his waist and buried her face in his chest.
“Baby, you okay?”
She nodded.
“You sure?”
She nodded again. “My legs are a little wobbly.”
He laughed, then in one swoop, bent down to pick her up and carried her over to the couch. Quinn sat in his lap with her head resting against his shoulder. Ian waited to see what she’d say, how she’d react to him treating her so roughly, since he’d never been anything but gentle in their lovemaking.
She intertwined her fingers with his and started placing soft kisses on his neck. “I want to try.”
He rubbed his thumb across her knuckles. “Try what?”
She sat up to look at him. “More. Different ways. I’m willing to give anything a shot, once.” She stopped and smiled. “More than once if I like it.”
Ian sucked in a breath. “Really?”
Her tongue darted across her bottom lip before she sank her teeth into it and nodded.
“Sweetness, you don’t have to do that.”
His statement was met with a rolling of the eyes and muttering under her breath. Even after all these years, his Spanish was only slightly less rusty than when they’d first met. He managed to pick up the words “kind-hearted” and “idiot” during her quiet rant before she took a breath and placed her warm hands on either side of his face.
“I know I don’t ‘have’ to do this. The last twelve years of our relationship has proven that.”
Any rebuttal got silenced by the hard narrowing of her eyes.
“I want to do this. To explore new things.”
Sincerity radiated through her every word. This was not the outcome he’d ever expected, but the possibility of getting to have new experiences with his wife was an opportunity he wouldn’t let go to waste. 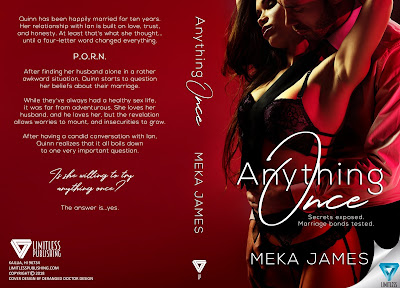