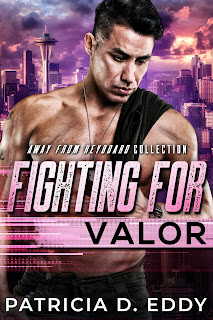 val·or: great bravery in the face of danger, especially in battle
Once, Jackson Richards had it in spades. As a member of the United States Special Forces, he fought alongside the bravest and most capable men he’d ever known. Then one mistake landed them all in Hell.
For six months, he fought. But one terrible day, his captors learned the full extent of his skills, and that sealed his fate.
Tortured and broken for endless months in conditions that made Hell look like a five-star resort, Jackson Richards died, and Isaad was born. Shaped into a weapon for the wrong side, he’d forgotten who he once was. Who he was meant to be.
Until the days his captor imprisoned Joey Taylor.
Helping Joey and her marine escape reminded Jackson of the man he used to be. And now, he’ll fight. For himself. For the friends he thought he lost in Hell. And for Caro. The woman with a secret he can’t ignore.
If he’s strong enough, he’ll leave Isaad behind. Maybe then, he can take back his true name.
Ripper.
WARNING: This book contains scenes of torture and implied sexual violence that may be disturbing to sensitive readers 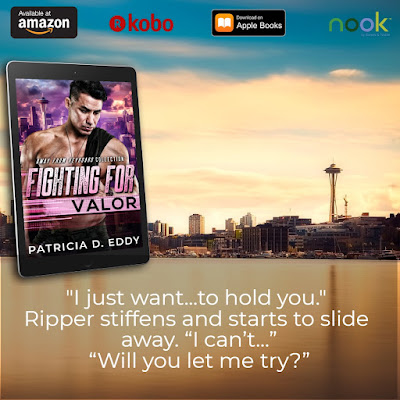 Ripper
The ride passes in silence, and I stare out the open side window, feeling the breeze on my face and smelling the sea. Ryker eases the truck to a stop on Roosevelt—only a little over a mile from the church. If I need to bolt, I can walk there.
It’s then I notice the sign. Emerald City Tattoo and Piercing. “What are we doing here?” My right hand reflexively goes to my left bicep, where my Special Forces tattoo used to be.
“Righting a wrong,” Ry says as he turns off the engine. His voice drops so low, I have to strain to hear it. “And maybe…finding something we all lost.”
Even though I’m not sure anything can right the wrongs from the past six years, I grab my rucksack and follow him inside.
“Dax?” He’s sitting on a bench against the wall, his folded cane in his hands.
As soon as he hears me, he heads right for us. “About damn time you showed up. I’ve been here half an hour.”
Ryker gives Dax a quick one-armed bro-hug, and even though they’re both clearly uncomfortable with the gesture, a part of me aches to be able to have that kind of physical contact again. But every time I think I’m ready, panic takes over. These are my brothers. The two people I’m closest to in the entire world. And I can barely manage to shake their hands.
Dax turns to me, and I swear he can see into the depths of my soul, despite being mostly blind. “Pick up the phone once in a while, asshole.”
I don’t respond, and Ryker reaches into his back pocket and pulls out a folded piece of paper. “Inara’s an artist. When she’s not killing people or translating boring legal documents into half a dozen different languages.”
Spreading the paper out on the counter in front of me, I freeze. It’s… “Holy shit.”
The Special Forces insignia, a crest with two crossed arrows bisected by a dagger and the motto—De Oppresso Liber—overlays an intricate design of a phoenix bursting from the flames. And encircling the entire design: ODA 212 Rip Dax Ry.
Tears burn, but I refuse to let them fall. Instead, I grind my fists against my eyes for a moment until I think I can speak again. Turning to my brothers, I realize I’m not the only one about to lose his shit in the middle of the shop. “Okay. Yeah. Together. Right?”
The relief on their faces breaks something inside me, and I let go. For a minute, I can shove my shame and fear aside. As Dax and Ry each put a hand on my shoulder, I return the gesture and let my tears fall for the first time since the plane landed in Seattle.
“Together,” Ry says. “Brothers. Always.”

Patricia D. Eddy likes to consider herself an unstoppable force. As long as there's coffee. Then, the voices in her head come to life. Her tales of werewolves, vampires and witches; Doms and subs; and battle-hardened, scarred military heroes feature characters so real, you'll want to jump inside the pages of her books to be friends with them. Or just give them a hug.
When she's not writing, she's a professional freelance fiction editor and technical writer. On weekends, she loves to take on home improvement projects, especially if they involve power tools.
Patricia lives in Seattle with her husband and very spoiled cats. You can find Patricia all over the web, and she loves to hear from readers. Email her at patricia@patriciadeddy.com