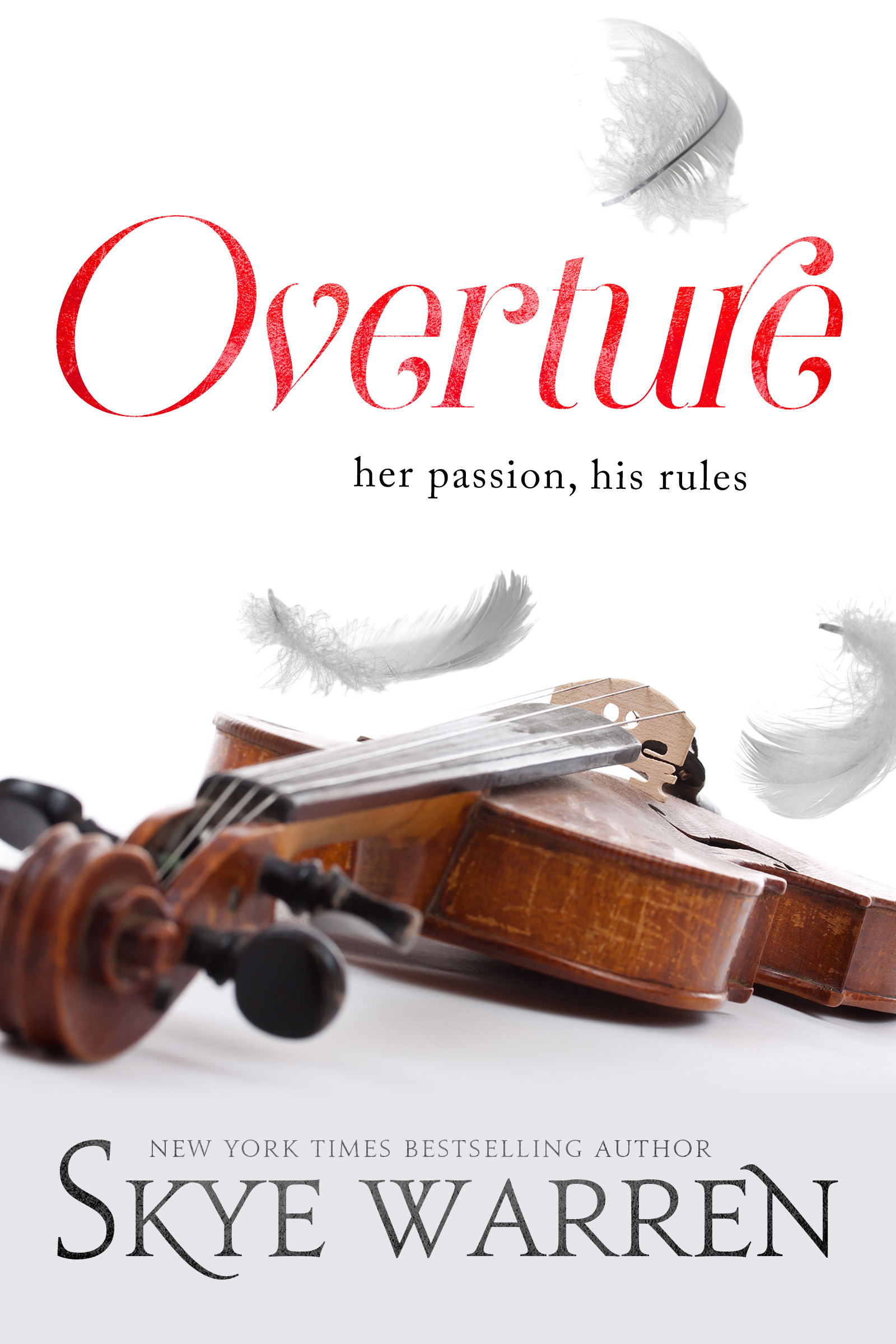 The world knows Samantha Brooks as the violin prodigy. She guards her secret truth—the desire she harbors for her guardian.
Liam North got custody of her six years ago. She’s all grown up now, but he still treats her like a child. No matter how much he wants her.
No matter how bad he aches for one taste.
Her sweet overtures break down the ex-soldier’s defenses, but there’s more at stake than her body. Every touch, every kiss, every night. The closer she gets, the more exposed his darkest secret.
She’s one step away from finding out what happened the night she lost her family. One step away from leaving him forever.
OVERTURE is the first novel in a brand new series from New York Times bestselling author Skye Warren.

The memory of our last talk heats the air between us—about condoms and sex. And the way he walked in on me when I moaned his name. God. I’m not sure I can stand another talk like that. “I’m not naive, Liam. I know you took me in because I didn’t have anywhere else to go.” A muscle in his jaw ticks. “That wasn’t exactly the reason. And even though I didn’t know you before I took custody, I’ve grown to care about you over the years. If I didn’t state it clearly enough, then the fault lies with me. I wasn’t raised to show… affection.” I stare at him, incredulous. Affection? It’s a cold comfort to a girl who’s always wanted the surety of forever. And the word might as well be alien to a man like him. “I’m going to tour the country. The world. I’m leaving, Liam.” He looks away. “Christ.” Unease moves through me. “Did you really think I wouldn’t come back?” “I don’t know why you would want to.” “Because I care about you.” Liam is six feet of pure muscle and hard will. There’s no way someone like me could go up against him and win. Except that when I take a step closer, he tenses. Another step and he goes still as stone. It gives me a sense of power, enough that I take the final step. “I care about you even though you’re controlling.” There’s only an inch between the ruffle of my blouse and the flat of his abs. “You think I’m going to apologize for keeping you safe?” he mutters. “You think I give a damn that you’re mad at me as long as you’re in one piece? That’s the only thing that matters.” “Because you think of me like a daughter?” He shakes his head slowly, not breaking eye contact. “No.” “No?” I whisper. “When I walked in on you…” His voice is hoarse. “I didn’t think of you like a daughter.” I should probably be horrified that he would think about me in any way other than family, except I’m the one who started it. I take a step closer, and there’s nowhere for him to go. He’s already backed up against the wall. This big, strong man who could probably make a whole army quake—or at least a battalion. And he’s cornered by me. This close I can see the green of his eyes, so dark they’re almost emerald, flecked with gold. A scar bisects one dark eyebrow, probably a scar from something terrifying and deadly. “How did you think of me?” I’m afraid to know the answer, but I’m even more terrified of never knowing. Of being a nameless, faceless body in that writhing crowd, hooking up with a stranger when the man I really want is standing right in front of me, inches away, his breath a feather-touch on my forehead. A small shake of his head. “It’s not right.” I’m not sure what right and wrong mean when it comes to us, but I know what it means for music. Someone can play a piece with perfect timing and notation. They can hit every single note, but it still won’t have passion. That part comes from inside. “Then be wrong with me. Don’t make me do it alone.” I push up on my toes, pressing my lips against his in a blind, artless kiss. I’m off center of his mouth, kissing the corner. He stands still as a statue, letting me wobble on my heels, letting me fall against him, only my broken kiss to balance me. Grief beats against my ribs. He’s going to make me do it alone. Of course he is. I’m always alone. A small sound escapes me. Loneliness. Pain. It vibrates against his mouth, sound made real. He jolts as if I’ve shocked him. Something unspools inside him. I feel it in the inch of air between us. And then I feel it in my lips. He takes over the kiss with shocking possession, his hand behind my head, his body turning us so I’m against the wall. He looms in front of me, blocking out the view. There are no vinyl records on the wall, no bass thrumming through concrete and steel. There’s only him, only this.How is it possible that only a few minutes ago I felt powerful? I didn’t know what this would be. I couldn’t know the way I’d revel in surrender. His tongue touches the seam of my lips, a pure electric sensation that makes me jump. I part my lips in surprise, pulling in the scent of him—man and earth, salt and sea. He tastes elemental. His tongue swipes the tender inside of my bottom lip. It’s more sensitive there than I could have imagined. I feel the slickness of the caress all the way in my core. My thighs clench together. So careful. So wary. I touch my tongue against his. He’s the one who groans. His hand fists in my hair, creating a delicious little ache. “Do you know what you’re doing to me?” he breathes, and I try to shake my head; it only makes him pull harder. “Liam… I need…” It’s like the bedroom when he walked in on me, my hips rocking, mindless, hungry. Worse than that. My whole body is moving restlessly against him. He tears himself away with a hard sound. Only an inch away. A rough tremor runs through him. It’s a small comfort, knowing that I’ve moved this man. Knowing how much control he has, knowing it’s eroded. But only a small comfort. He still leaves me panting against the door. “I’m supposed to protect you,” he says, his voice taut with guilt.

Skye Warren is the New York Times bestselling author of dangerous romance such as the Endgame trilogy. Her books have been featured in Jezebel, Buzzfeed, USA Today Happily Ever After, Glamour, and Elle Magazine. She makes her home in Texas with her loving family, sweet dogs, and evil cat.