For Her Sins by Mark Wooden 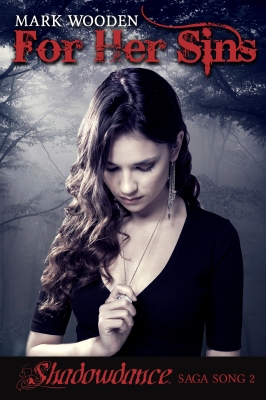 Neo-Nazi sorcerers. Zombies. A demon at a Hollywood movie premiere. These creatures stand between vampire assassin Adriana and her revenge against the sorcerer who slaughtered her werewolf family.
But as she pursues the sorcerer, Adriana feels the sins of her murderous past catching up to her. Or is she merely a pawn in the secret war between supernatural creatures known as the Shadowdance?

The son of a sharecropper (not really), Mark Wooden has actively pursued the dream of being a Creative since his epic kindergarten work, "Ne-Ne the Vampire Panda.” Though he prefers movies, Mark chose the novel as his creative outlet; they don’t cost anything to write and he is the only person who can slow his progress.

He draws inspiration from "Buffy the Vampire Slayer" and "Blade," decades of "Batman" and "X-Men" comic books and conspiracy epics "24" and "The X-Files." He'd be remiss if he didn't also mention the influence of a certain Frank Miller-created assassin named Elektra.

Mark mines his two decades of experiences as a video director in live entertainment (concerts and corporate events) to instill humanity into the vampires, demons, werewolves, sorcerers and other creatures of his “Shadowdance” urban fantasy saga. When he's not doing all that he's taking care of his dachshund, Adi (yes, named after a Jedi).

“By Virtue Fall: A Song of the Shadowdance" is the first novel in the "Shadowdance" saga. Like it? Be kind and post a review to where ever you purchased a copy. Thanks!

This promotion is brought to you by Pure Textuality PR.