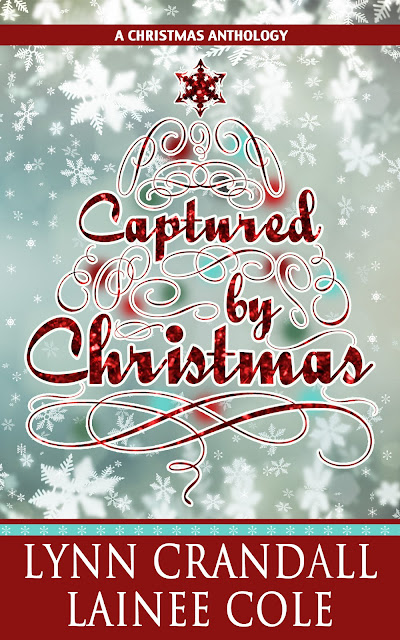 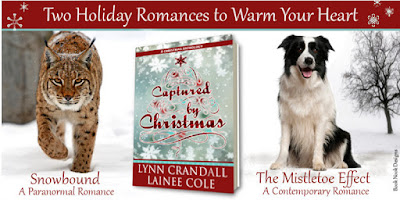 It’s Christmas, and the season of holly, Christmas trees, and goodwill is drifting on air in merry holiday wishes. Romantic suspense and paranormal author Lynn Crandall and contemporary author Lainee Cole present in their own way two stories of love in Captured by Christmas. However it finds you—under a Christmas tree or drifted in snow in a backwoods cabin—the spirit of the season will wrap you in love. In Snowbound, Lynn Crandall lets readers check in on favorite Fierce Hearts series were-lynx characters Kennedy Mitchell and Asher Monroe as they uncover the identity of the creature scaring the humans in Octavia, a small rural community in northern Michigan. Plans for an intimate getaway and family-style holiday are crumbling as the snow piles higher and Kennedy and Asher find themselves snowbound with a killer outside their door. In The Mistletoe Effect, Christmas is second-grade teacher Tess McCall’s least favorite holiday, but she’s doing her best not to let it show. Learning he’s a father to seven-year-old Holly makes Alex Randle anxious about the upcoming holidays. When Tess’s class starts reading to shelter dogs, Holly and the antics of shelter dog Mistletoe lead them all to rediscover the magic of Christmas.

Snowbound: Kennedy glanced out the window and noticed the closer they came to Octavia, the deeper the December snow piled. “It is pretty here. There are so many tall pines and, dotted with snow, they feel Christmassy.”“I think you’ll get the Christmas you want this year, complete with a rustic cabin in the woods and lots of snow.” Asher squinted as the early morning sun they’d left in Laurelwood drifted low in the mid-morning sky.“I can’t wait to decorate the cabin. I hope the rest of the colony coming later remembers to bring all the decorations.” Images of a real, family Christmas had been dancing in her head for weeks. At twenty-four, she was more than due.Asher glanced at her slyly. “But since they won’t arrive for a couple days, we’ll have that alone time I was talking about.”Kennedy fisted him in his bicep. “Stop teasing.”“Oww. That hurt.”“Poor baby.” Kennedy blew him a kiss. “That will have to do until later.” She ran her fingers through his tousled blonde hair, enjoying the silky feel of it.“We could stop at the cabin first, you know. We’re making good time.” Asher swept his finger playfully down her nose.“Tempting, but no. I need to get to the rescue facility and set up.”“Hang on!” Asher yelled.At that moment, Kennedy saw what he saw ahead. A very large lynx, speeding out of the snowy forest on her left and into the road. “Holy shit! Don’t hit him!”Asher slammed on the brakes and the car swayed in the snow-packed road.“He’s staring at us.” Kennedy’s pulse raced at their near miss. The lynx’s eyes glistened, fastened on her. “Why did he stop in the road?” She couldn’t believe her eyes.Asher worked to stop the car while swerving, but just as suddenly as it appeared, the huge lynx ran the few steps off the road and quickly disappeared into the forest on the opposing side.Kennedy watched silently as Asher brought the car to a complete stop just short of a snowdrift along the side of the road. She blew out a long breath. “Geez, that was close.”Asher reached over the console and hugged her. “Are you all right? That was harried for a minute.”His arms around her were warm and assuring. It was the gesture that brought tears. She’d been raised to disconnect from emotions and taking care of herself was mandatory, something she’d done from a young age. She prided herself on her strength. But the coldness of the past would always be a part of her, and a caring touch now resonated through her at a deep level of appreciation. She’d stopped resisting tenderness, and her vigilance for the other shoe dropping had diminished, too.“I’m fine. How are you?” she asked, pulling away. He was what she expected. Asher, unflustered but a seething. “I never saw that guy coming. I’m glad I didn’t hit him.”“Have you ever seen such a large lynx before?” A visual of a very real, huge lynx hovered in her mind.“Unfortunately, yes.”“Yeah. Marcus Blue. Killer Marcus.” Kennedy shivered at the thought of the rogue were-lynx who’d been a menace to the colony and a killer. Casey and Michelle, Booker, Lara, Conrad, Asia, Quinn, and Tizzy—each one in the colony, including her and Asher, had suffered under Marcus’s malice.

The Mistletoe Effect: Alex snapped his fingers. That was it! Tess McCall could be the answer to all his problems! He approached her. “I have a huge favor to ask.” Tess watched him cautiously. “Okay…” “Holly wants to adopt Mistletoe.” She smiled, and he felt the brilliance warm his soul. “That’s great! They seem devoted to each other. Mistletoe goes straight to her every time they come to class.” “I don’t know anything about dogs. I need to learn but I want this to be for Christmas.” She crossed her arms. “So what do you want me to do?” “I’d like you to keep Mistletoe until Christmas. Maybe pretend you adopted her. I’d like Holly to learn how to care for a dog, well, and me, too. Maybe we could come help feed her, walk her. I don’t know, just spend some time with her, getting used to her.” Tess studied him. She seemed to do that a lot. Did she find him lacking somehow? Mike had admitted she was reluctant to help him, but had agreed to for Holly’s sake. Maybe he shouldn’t have asked her to help with this. Maybe that was overstepping the bounds of what she was willing to do for them. “I’ll think about it.” Relief rushed through him. “I don’t want to lose Mistletoe. I’ll talk to Mrs. Shull and let her know.” “I haven’t agreed to it yet.” Alex smiled, unable to stop the words before they rushed out. “No, but you will. You care about Holly.”

Lynn Crandall lives in the Midwest and writes in the company of her cat. She has been a reader and a writer all her life. Her background is in journalism, but whether writing a magazine or newspaper story or creating a romance, she loves the power stories hold to transport, inspire, and uplift. In her romances, she focuses on vulnerable, embraceable characters who don't back down.

Lainee Cole’s love affair with books began when she was young, and her mother encouraged her love of reading. By the time she was in seventh grade, Lainee was making up her own stories and poems, exploring various styles of writing. Ah, the drama of junior high. She wouldn't go back to those days for anything! But reading voraciously and exploring different types of writing led her to romances. She loves the challenge of writing romance, developing characters and figuring out what makes them tick. They often take on a life of their own, surprising and annoying her. But they also give her hope and inspire her to follow her dreams. Lainee strives to write stories that will make readers laugh and cry, give them hope, and encourage them to believe in the power of love. 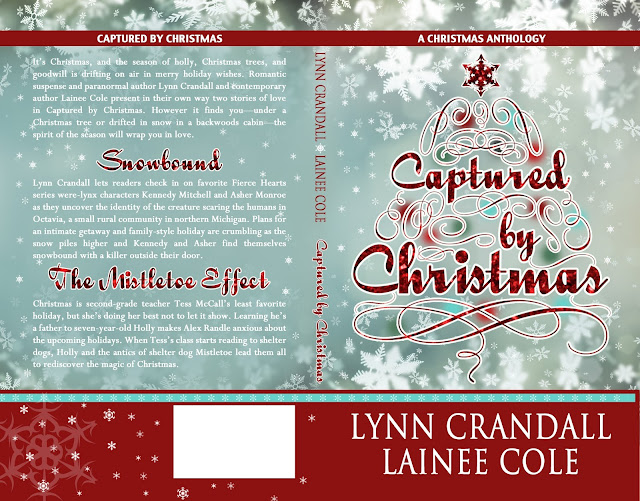