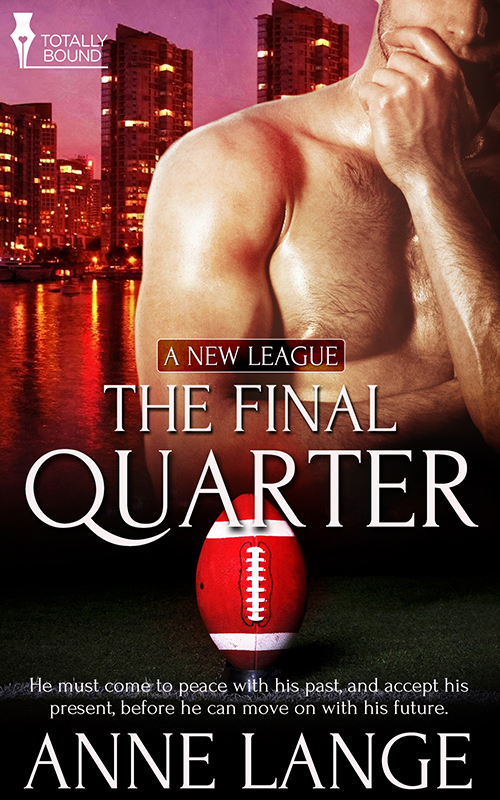 A quarterback facing the end of his career must come to peace with his past, and accept his present, before he can move on with his future.
Mitch Ryland accomplished what his father said he never would—he made something of himself.
When his wife suggests she’d like to start a family, Mitch is thrown for a loop. He’s never told her about his life before he ended up with his foster parents or his plans never to become a father. So when he’s taken out of the game, his failings from the past come back to haunt him, and Mitch blames his injury on his loss of focus. He’s unprepared for his career as a professional quarterback to be over. Nor is he ready to tell his wife about why football is so important to him. He’d rather put emotional and physical distance between them and focus on getting back in the game.
Serena Ryland has dreamed of becoming a mother. But when she mentions the idea to her husband, he freezes her out and she has no idea why. She’s worried that if they don’t start talking soon, she’ll lose him forever. When he refuses to come home to mend from an injury, she takes matters into her own hands, determined to spend more time with him, hoping to reignite the romance in their relationship. But she’s unprepared for the things she learns on this trip. Her husband has been carrying a few secrets that just might change the outlook of their future.
Reader Advisory: This book contains oral sex in a public environment and light bondage.
Publisher's note: This book is part of a series but can be read as a standalone title. 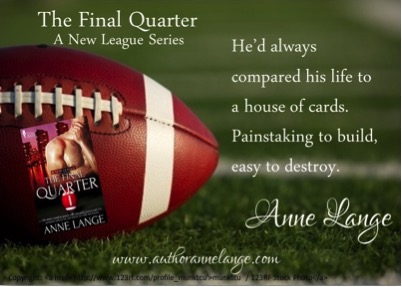 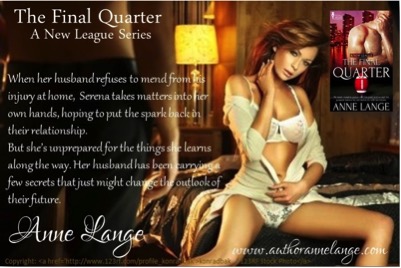 Mitch sighed and shifted in his chair. The knee he could handle. Bruised and sore, he’d limp for a few days, but it was his shoulder he worried about most. This was the third time he’d dislocated it. The first official time the team doctor knew about. His fingers itched to massage the joint, but he didn’t dare. No way in hell would he show any sign of weakness. The one thing his father and grandfather had drilled into him from a young age. A lesson he’d learned well. “It’s more than just a simple sprain or a bad bruise, Mitch, and you know it. This is potentially career ending, especially if you don’t do as I’ve instructed. You need to rest it. Whatever you’ve been doing to keep this from us isn’t helping. Today’s proof of that. And it’s not going to get better until you do something about it. And you can’t do something about it until you’re not on the field every day.” Noah took a deep breath, his expression full of compassion. “Apply ice to reduce the swelling three times a day for fifteen to twenty minutes. That shoulder needs to be kept stable. We need the swelling to go down so we can take a good look at it. I want you to wear an arm sling for the next three weeks. “I’ve scheduled an appointment for you three days from now then we’ll have a better idea what we’re dealing with. You’ll probably need to go through some therapy regardless of whether you end up heading down the surgery path or not. With some rest, maybe some therapy, and a light training regiment, we’ll see if there’s been any change.” Panic swept through Mitch. He clenched his hands into fists on his thighs. “And if it doesn’t get better?” “We’ll discuss that when the time comes.” Mitch, well aware of the consequences, filled in the blanks. Surgery. Rehab. Months off the field. If he ended this season on the injury reserve list for next season, he’d miss training camp and wouldn’t be allowed to practice or play until the doctor cleared him. And if he did practice and aggravated the injury, or possibly made it worse, he’d be out for the rest of that season. Or longer. On top of that, he’d have to deal with his standings. Out of play meant his rating would be affected and his stats would tank—and not only his. The team would take a hit as well. He’d disappoint the fans. He’d disappoint his friends and family. He might never be the same afterward. He’d end up a nobody. Just like he’d been told. His football career may already be at the top of the spiral, just waiting for that push to send him off the edge and into the vortex. He’d always compared his life to a house of cards. Painstaking to build, easy to destroy. The king sits perched at the top, but then one slip, one tiny tug or poke on one of those cards and the whole thing would come tumbling down. A tremor now rocked the house beneath his feet.

KOBO I B&N I Totally Bound I Amazon I Amazon.ca I Amazon.uk

Shoes are her addiction, but books are her passion. Anne Lange grew up with a love for reading. If you take a close look, she’s got either a book, her Kindle or her Kobo nearby at all times. You know, just in case there’s time to sneak in a chapter or ten. Anne reads many genres of romance, but prefers to write sexy stories, often with a dash of humor, and usually with a side of those sinful pleasures your mom never told you about. And always with a happily ever after. While embarking on this wild journey of becoming a romance author, Anne juggles a full time job and a family. Though not always successfully. Who needs a clean house every day? And what’s wrong with cereal for dinner? She lives in Ontario, Canada with her wonderfully supportive husband, three awesome kids who are growing up way too fast, and the family pets, Rocky the bearded dragon and Lily the chocolate lab.