EXCERPT REVEAL : Until by Danielle Norman

JUST FOUR MORE DAYS UNTIL... Until by Danielle Norman goes live on January 22nd!
KEEP READING FOR AN EXCERPT FROM THE MADNESS! 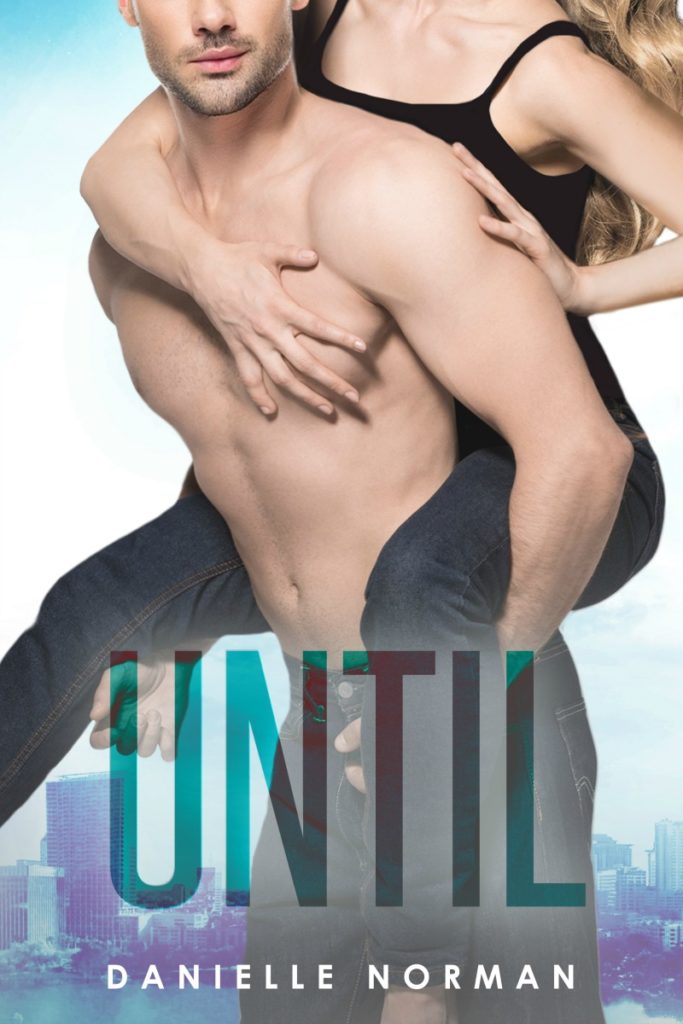 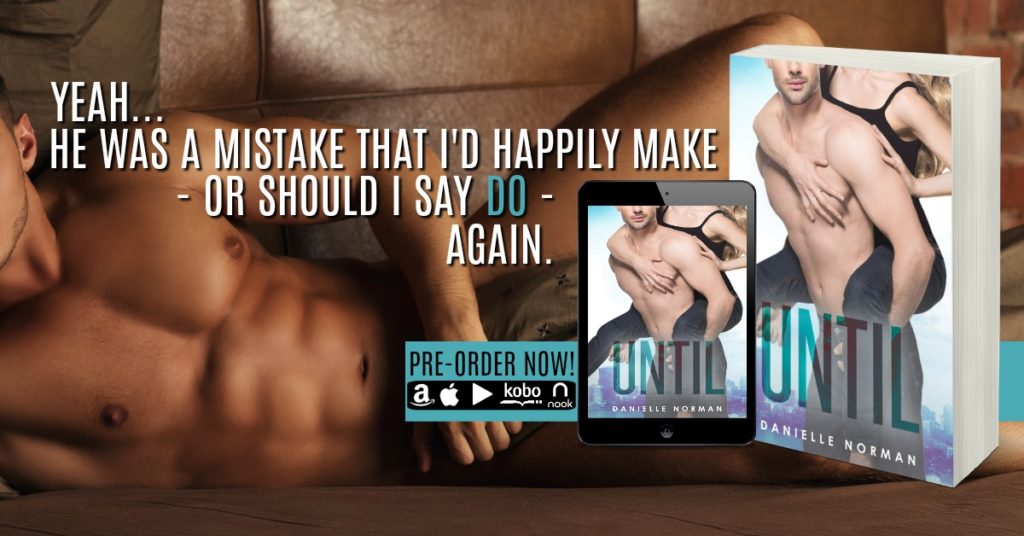 BLURB:
"What happens in Vegas? Well, in Danielle Norman’s Until, it’s a whole lot of steamy, sexy, sassy fun in this absolutely delicious rom-com with a taboo (sort of!) twist! An absolute winner!" — New York Times bestselling author J. Kenner The gang returns... I’m Stella Lang, everyone thinks of me as the sassy one, the one who’s not afraid to say what’s on her mind, but the truth is…I’m scared. Scared of being rejected. Scared of having my heart broken all by one man…Tristan Christakos. He’s a doctor at the hospital where I work. I’m close to his entire family - his brothers are married to my best friends and his cousin is married to my brother. Interwoven? Yeah…you could say that. If things didn’t work out between us, a lot of people would be hurt. So what do you do when there’s sexual tension? You’re alone in Vegas? And a life altering secret has landed in your hands? **Until is the final installment of The Iron Orchids Series but may be read and enjoyed as a standalone contemporary romance / rom-com!

Chapter One Stella
Stopping in front of the large faux-wood door that read: Staff Administration, I took a deep breath and then knocked.
“Come in.”
One step into the room, I froze because sitting in one of the chairs was Dr. McCreamy, otherwise known as Tristan Christakos, the most gorgeous man to ever walk the planet, the bane of my existence, and the best one-night stand ever. Yeah, he was a mistake that I’d happily make or should I say do again.
Fuck.
Tristan stood when I entered, as his damn well-bred, gentlemanly self had to do, which only made me want to jump him even more. To make matters worse, he was wearing a devilishly wicked smirk on his lips that made all of my parts take notice.
“Stella, have a seat.” Louise Cameron’s back was ramrod straight as she sat in her high-back, black pleather chair. If I were to base my visit on her posture alone, I would say I was about to be canned.
The hospital had a no fraternization policy. Although, they had allowed married couples to work for the same hospital in the past, this all had to be reported to admin, and they ultimately decided whether or not to keep both employees. In situations like this when it was between a doctor and a nurse, they usually ended up keeping the doctor since nurses were a dime a dozen. Was that fair? Hell no.
I could already feel the ire in me building and was ready to fight or at least not go down without a fight.
I moved to the chair opposite Tristan and plopped down. Okay, I knew that I possessed little to no grace when I did that, but whatever, I was pissed. Turning to face him, the heat in me rose as he continued to smirk. The asshole smirked. He knew we were busted and he was safe. I’d never imagined him being so cruel.
But fuck a duck if the man still wasn’t gorgeous. His eyes were the color of fresh coffee, untainted by cream. And his skin . . . well, that was different a story, it was cream with a dash of coffee.
“Stella,” Mrs. Cameron began, “as you are aware, the hospital is building a genetics study center in the hopes of being able to more easily find donor matches. Every year, it seems that there is a bigger strain on our match and donor resources. Not only from the state of perpetual emergency that we seem to be in but also our advance technology in ultrasound imaging. As you know, we are able to detect some birth defects as early as the first heart beat. We feel that it is important as a level one trauma unit and a level-three neonatal ward that we have this resource available to us twenty-four seven. We’ve been sending doctors to different training sessions so they are up to date with all the current technologies and tests.”
Tristan cleared his throat, and I turned my attention back to him. “You may not be aware of this, Stella, but my interest has always been with trying to negate the rise in genetic birth defects that we see in our high-risk unit. But after the strain on our resource bank for tissue, marrow, and blood, my research was halted. This new genetic center will help me continue my focus.”
I listened to Tristan’s explanation, but none of this made sense. Sure, his reasoning made sense, but where I was lost was what in the hell any of this had to do with me. My face must have shown my confusion because Mrs. Cameron finally slid a file folder to me.
“There is a pediatric genetics conference in Las Vegas next week, and we’ve been on the waiting list. Yesterday, we found out that there had been a cancellation and that Dr. Christakos has been invited. He has been asked to bring a nurse or assistant, and he tells me that the two of you worked well together when you were over in the Women and Children Center.”
I nodded because we had worked well together, and she smiled.
“He’d like you to accompany him to the conference and act as his assistant moving forward as we get the genetic center established.”
Slow down there, Polyester, he what?
He wanted me to work with him?
He wanted me to go to Vegas?
Me. Tristan. In Vegas? Fuck yeah, where did I sign? Shaking my head, I turned to looked at the olive skin Adonis with chocolate eyes that made me want to get on my knees and say ten hail Mary’s and praise sweet baby Jesus.
Shit. I was staring. Smacking my lips, I cleared my throat and then tried again. “Sure, tell me whatever you need,” I said and watched as the corners of Tristan’s lips pulled into an almost challenging smile. I had no clue what he was challenging me to, but he knew better than to yank my chain because, let’s face it, I yanked harder, and of the two of us, he was the only one with something to grab ahold of and tug. 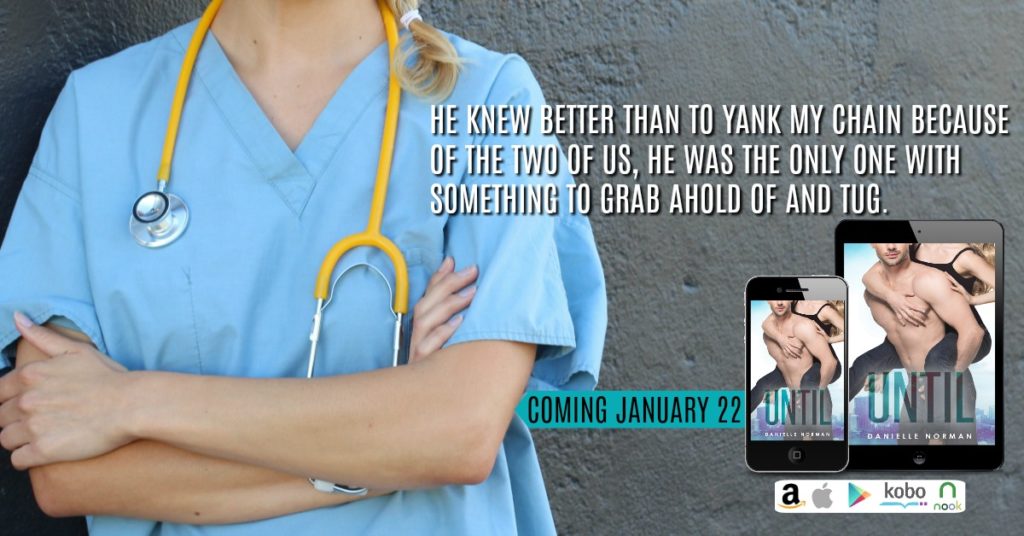