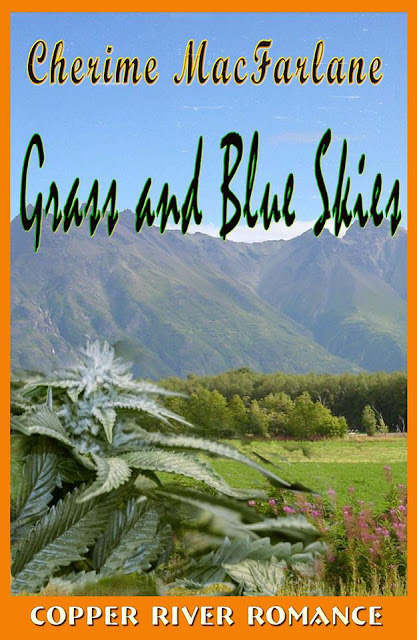 On crutches and no longer able to fly jets, Brett is grateful to have come home alive instead of in a box. Though he’s still got his leg, there’s a lot of pain, too so a relative sends him to see the pretty herbalist who helps people with pain and nerve problems. One look at her and Brett wants more than pain relief.

Nikee has a secret room beneath her greenhouse full of pot plants. The woman began growing medical marijuana several years ago to help her father after a bad accident, and she has no plans to quit. Hopefully telling Brett about the grow operation won’t cost her a relationship with the man.

If the tender balance of her relationship with Brett isn’t enough, someone else has discovered her secret. He wants her crop and will do anything to cash in on her work, but Nikee can't go to the Troopers for help.

Can a woman, an old man, and an ex-jet jock keep the nefarious character out of her medicinal pot? 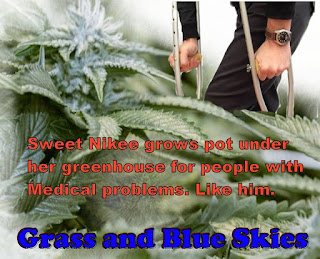 The memory of the fear slammed into her as fresh as it had been all those years ago. She and Tore only had one parent left and didn't want to lose their father. Watching him deal with the pain daily turned her into a terrified, withdrawn wreck.

All thoughts of normal teenage things had gone out of her head. She and Tore dashed home from school as soon as dismissed. At least Tore had a driver's license. He drove over to her middle school as soon as possible. Nikee waited bouncing from foot to foot, ready to run home.

The necessity to get home as quickly as possible wasn't just to reassure themselves of their father's health, they had chores to do on the farm. It was up to them to keep the place afloat. The summer she turned fifteen they began discussing the mechanics necessary to change the farm over to a u-pick operation. That was the summer Einar discovered pot had its uses.

That winter she and Tore dug out the old root cellar. They used the earth they excavated to smooth out the holes and level the area where the greenhouse now stood.

"Okay. Well, friends of Tore's kept us supplied through the winter with pot for Dad. Tore, and I excavated the root cellar out on our own. Come spring we got seeds from his friend and I began the grow operation. Tore, and I built the greenhouse with help from his buddies. I learned how to grow pot and we turned the farm into a u-pick place."

"This set up was designed to help your father then?"

With a deep sigh, Nikee shook her head. "You're asking if that's all we ever did, and the answer is no. Tore never wanted to be a farmer. It's not what he was meant to do for the rest of his life. I, we grew enough to get the down payment for the boat for him. Then we shut down that part of the operation. Yes, I grew weed for people who only wanted to smoke to get high."

Afraid to see his expression, she slouched down against the wall behind her. Tears distorted her vision and pooled in her eyes. Nikee brushed them away with her right hand.

"Are you angry with me?" she finally got the courage to ask.

His thumb still caressed her hand. For a long space of time Brett remained silent. Finally, his whisper slid across the top of her head.

"I have no right to judge what you did. You kept your father alive, kept the farm and got your brother a boat. You did what you had to. For two kids, you did good. I've got one question for you, are you growing pot for stoners now?" 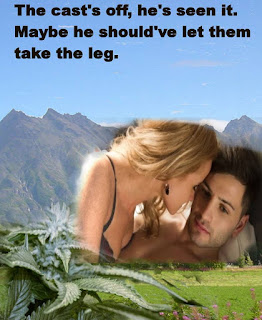 OTHER BOOKS IN THE COPPER ROMANCE SERIES

~ Heart of the Hunter

Although born in New Orleans, I am proud to call myself an Alaskan. I have lived here since 1977. I have seen -40 degrees, hauled water, made bear bacon and I live in a cabin. I have used a fishwheel to catch salmon coming up the Copper River. I was my second husband's chief mechanic's helper and roadie. I have cut firewood on shares. I worked as a cocktail waitress during pipeline days in a small lodge on the Richardson Highway.

My second husband, a Scot from Glasgow, was the love of my life. When I write Scots dialect, I personally experienced hearing it from my in laws. When my husband got on the phone to Scotland, after 5 seconds I could barely understand a word.

We moved to Wasilla to get warm. It barely drops past -25 degrees here in the winter. I became a paralegal and worked for over 26 years for the same firm.

Alaska is my home. I never thought I would love it so much, I never want to leave. The beauty of Alaska is a draw I cannot resist. I love the people and the history. I have been captured by a place I came to under duress. Life does play some interesting tricks on one. My love and I were not apart more than 24 hours for 20 plus years. I never wanted to be anywhere but with him. He was a man to run the river with and was my biggest fan. 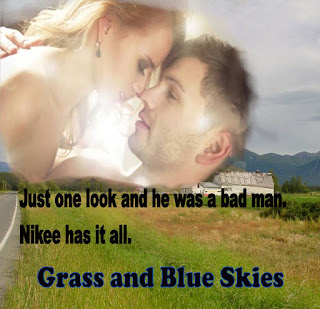