Holiday Treat & Giveaway ~ My Soul To Keep by Kennedy Ryan

From Kennedy: Happy Holidays! I wanted to offer something special to those who have read MY SOUL TO KEEP. A full deleted chapter from the book. More Rhys + Kai! If you haven't read the book, I have something for you, too. The first three chapters of the book absolutely FREE right HERE! Hopefully you'll love what you read. And for everyone and anyone, scroll all the way down for a rafflecopter giveaway featuring: 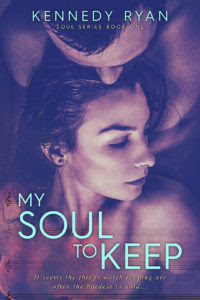 Amazon US Amazon UK Amazon AUS
Signed Paperbacks
It seems the things worth keeping are often the hardest to hold...
KAI I had two things in life that mattered. My mother and my music. Mama was taken from me too soon, and now music is all I have left. It’s the thing that’s pushed me right out of backwoods Georgia into Los Angeles, where the line between fantasy and reality shimmers and blurs. I’m finally making my way, making my mark. I can’t afford to fall for one of music's brightest stars. Not now. Music is all I have left, and I’m holding on tight with both hands. I won’t let go, not even for Rhyson Gray. RHYSON I had one thing in my life that mattered – music. The only constant, it’s taken me to heights most people only dream about; a gift dropped in my lap at birth. I thought it was enough. I thought it was everything until I met Kai. Now she’s all I think about, like a song I can't get out of my head. If I have to chase her, if I have to give up everything - I will. And once she's mine, I won't let go. 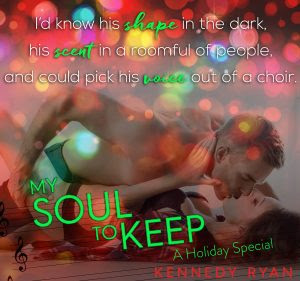 I just can't write about myself in third person for one more bio! I'm a wife, a mom, a writer, an advocate for families living with autism. That's me in a nutshell. Crack the nut, and you'll find a Southern girl gone Southern California who loves pizza and Diet Coke, and wishes she got to watch a lot more television. You can usually catch me up too late, on social media too much, or FINALLY putting a dent in my ever-growing To Be Read list!