Release Blitz ~ Heat of the King by Bruce Blake

HEART OF THE KING
Khirro's Journey Book 3
by Bruce Blake 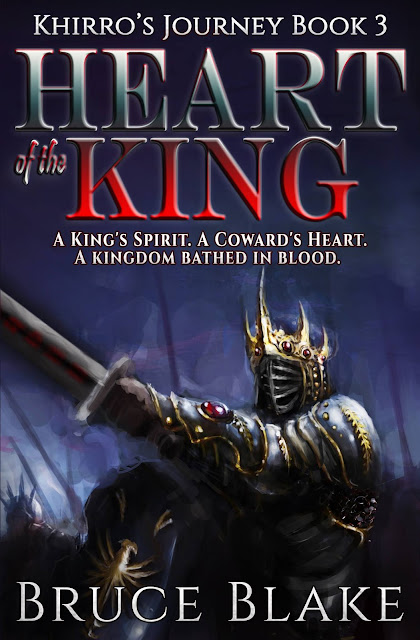 It began with a vial of blood, a curse, and a quest to a haunted land.

A king's spirit. A coward's heart. Together, a kingdom's last hope.

Sheyndust, the Archon, desires to be Necromancer and wield dark magic the likes of which the world has never seen. For years, her deadly plan has fallen into place piece by piece, treachery by treachery, death by death. With her enemies on their knees and an army of the dead at her command, nothing stands between her and the ultimate power for which she thirsts.

Nothing except a farmer and a dead king.

The curse that bound Khirro to his task was broken when the blood of the king spilled, but the king's spirit—a tyger of vengeful flame—burns bright within him. It pushes Khirro through hostile lands to return to his home. It pushes him to be more than he ever thought he could be despite the doubt and fear devouring him. It pushes him in a race against time to save the kingdom, a race he is bound to lose.

As the final pieces of the Archon's plot fall into place, and her power and army grow, it looks certain that all will be lost.

Unless a coward can look inside himself and find the heart of a king.

Therrador sat on the pile of dirty straw, elbows on his knees, head hung. He didn’t raise his head when he heard the words.

Enough days had passed for him to lose track of their number; the guards had woken him every time he appeared to doze, and brought only water enough to keep him alive, nothing more. No food, no change of clothes, no medicine. The filthy bandage wrapped around his hand reeked of infection, and the stump of thumb hidden beneath ached with numb pain, though not so much as the untended wound in his thigh.

A woman’s voice spoke the words, so he knew it to be either hallucination or the Archon toying with him. He had no interest in either.

“They still carry the essence of the king.”

The muscles in Therrador’s back and shoulders went rigid at the last words.

“Leave me be, witch. Haven’t you punished me enough?” His voice cracked in his parched throat and its tone of defeat surprised and embarrassed him.

The temperature in the cell dropped, and the feeling of a presence beside him brought goose flesh to Therrador’s arms. He looked up into the burning green eyes of a young woman, her freckled cheeks framed by red curls, and thought she might be the most beautiful woman he’d ever seen.

“You’re not real,” Therrador croaked. “You’re another of the Archon’s tortures.”

She crouched in front of him and held her hand out to him. In the dim light cast by the torch in the passage outside the cell, and with his lack of strength and focus, it took a minute for Therrador to realize she held a cup.

He stared at it but made no move to accept it. The woman didn’t move, either.

Therrador considered for another moment before reaching out a weak and shaking hand. His fingers brushed the side of the clay mug, felt its solidity, its realness. Saliva rushed into his mouth at the thought the cup may contain relief from the thirst burning at the back of his throat, but he kept his eagerness carefully hidden. His fingers wrapped around the vessel’s cool surface and brought it close to his face; he peered over the lip at the liquid inside.

He leaned closer to it and sniffed deeply.

The edge of the cup touched his mouth and a splash of water lapped against his lips. Cool, tasteless. He slurped a little onto his tongue, the promise it held making his parched throat howl for more and, before he could stop himself, Therrador quaffed the water as fast as his mouth would take it. Water spilled over his chin, ran down his neck into his shirt. The cup’s supply never seemed to end allowing him to drink and drink and drink.

He drank until his belly hurt.

Energy flowed back into the king’s limbs. He pulled his mouth away from the rim of the cup and tilted his head back, drawing a satisfied breath in through his nose before gazing at the woman’s face. Her full lips tilted up at the corners in a gentle smile, her eyes shone. He didn’t know her, had never seen her before, but inexplicably felt he should trust her.

“You’ll know him when he comes, but he’ll need your help.”

Therrador scratched his stubbled cheek, felt the heat of fever burning in his head, and wondered if this woman and her words could be real. He turned the clay cup between his fingers; it felt real enough.

If the man bearing the king’s blood was coming, and he aided him, perhaps the Archon might be defeated. But this knowledge of her enemy’s inevitable arrival might also be the bargaining chip he needed to get his son back. He looked toward the cell door and saw the shadow of his undead guard beyond, so leaned toward the woman. She smelled of roses.

“When will he come?”

“Soon, and there will be a battle. That is where your help will be needed. Not even the king’s spirit can defeat the army of Kanos without help.”

Therrador nodded and stroked the long beard trailing from his chin, the braid which normally held it in place abandoned soon after he landed in the dungeon cell.

The tips of her fingers brushed his wounded thigh. Pain flared along Therrador’s leg as if she’d touched him with a lit torch, and he sucked a breath between his clenched teeth, biting down against the agonized cry in his throat. The wound throbbed and burned, his body tensed. She pressed her palm flat against it and, a minute later, the pain settled to a tingling sensation, then finally disappeared.

The woman removed her hand and Therrador replaced her touch with his own. The flesh felt tender and sore, but the wound was gone. He raised his right hand wrapped in the stinking bandage, hoping she would do the same for the wound beneath the gray cloth. She looked at it and shook her head, then stood, and Therrador saw her form was translucent.

“You have some time, but not much.”

The imprisoned king stared as she seemed to float across the cell toward the door, feet hidden beneath her long white gown. She didn’t pause when she reached the bars, but passed through and faded from sight like a morning mist burned away by midday sun.

Therrador touched the back of his hand to his forehead and found his fever had broken, disappeared along with the wound to his leg. Perhaps sickness and hallucination weren’t to blame. The king had never believed in apparitions, but neither did he believe in men brought back from the dead until they laid siege to the fortress. It had been a season of oddities: the king’s blood, undead soldiers, and now a spirit come to his aid.

Is this an opportunity to save my son, or is my mind finally snapping in two?

If the ghost’s words were true, he had little time to decide which was the case and how to best use it to his advantage.

He rose from the filthy straw, joints creaking with disuse, and brushed dirt from the seat of his breeches before taking an unsteady step toward the cell door. When his previously injured leg didn’t falter beneath him, he strode across the floor, energized by the ghostly woman’s water. He reached the bars and wrapped the fingers of his good hand around the cold steel, pulled his face close. A short way down the hall, his undead guard stood motionless, staring at the blank wall ahead, as always.

It didn’t see the woman.

“Guard,” he called, his voice strong and filled with the authority bred of years commanding men. “I need to see the Archon. Now.”

Bruce Blake lives on Vancouver Island in British Columbia, Canada. When pressing issues like shovelling snow and building igloos don't take up his spare time, Bruce can be found taking the dog sled to the nearest coffee shop to work on his short stories and novels.

Actually, Victoria, B.C. is only a couple hours north of Seattle, Wash., where more rain is seen than snow. Since snow isn't really a pressing issue, Bruce spends more time trying to remember to leave the "u" out of words like "colour" and "neighbour" than he does shovelling (and watch out for those pesky double l's). The father of two, Bruce is also the trophy husband of a burlesque diva.