How far would you go to reclaim your heart’s desire?
Devon has laid claim to Elz—marrying her in twenty-first-century America as well as nineteenth-century England. He hopes it will grant a respite from others who are drawn to the flame in her eyes.
During a trip to London, Devon’s hopes are dashed as he thwarts an attempt to kidnap Elz. While investigating who is behind the attack, he finds himself at a crossroads and is forced to enlist the aid of his friend turned rival, Symond Grayson, the Duke of Graburn.In an act of compassion gone horribly wrong, Devon’s marriage to Elz is threatened and his world is turned upside down. The door is opened for Symond, and the duke has every intention of walking through it.
With their love in as much danger as their lives, Devon has no choice but to send Elz far from Symond’s reach while he contends with their foes—old and new. Battered from all sides, Devon is under siege, and the stakes are raised as Elz and the Phoenix bloodline are placed in jeopardy. Devon could lose Elz forever if another can win her heart.
THE SAGA CONTINUES… 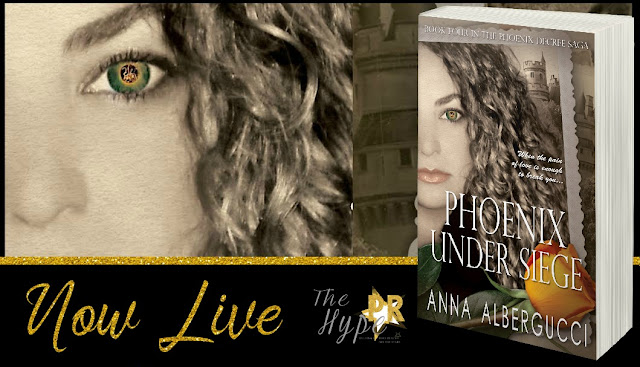 Married to her high school sweetheart, Anna Albergucci lives in Texas, surrounded by her ever-growing family and her fur babies.
As a child, Anna had a bright imagination and entertained others with the telling of her colorful dreams. She now weaves her stories into fiery characters that live lives the rest of us only dream of.
Anna is a member of several writing groups and is the president of the Cisco Writers Club. She is also the founder and host of a yearly writers’ retreat held at her estate.
She loves mornings, coffee, and cuddling with her grandkids. She’s a sucker for organizing parties, especially historical costume parties. And in her spare time you can find her touring old mansions, shopping for antiques, or sitting on the porch with a good book.
Anna loves to hear from her readers.