Release Day for Lauren Blakely’s ONCE UPON A SURE THING

Who’s ready for a sure thing? We’ve got your next racy read right here!

✔ Miller, a sexy and sweet rocker with a dirty mouth!

✔ Ally, a singer and a mom who loves her peeps with her whole heart!

Sizzling hot, swoony and sweet, and filled with everything in between, ONCE UPON A SURE THING is full of heat, heart, humor and sexy times you’re sure to love.

Get your copy of ONCE UPON A SURE THING today! 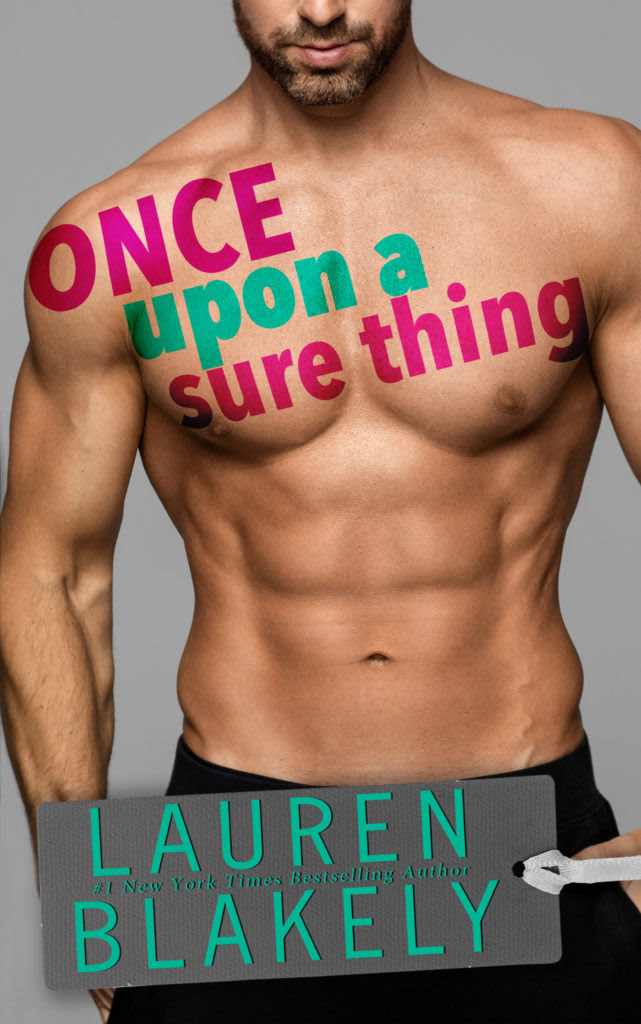 ✮✮✮ ONCE UPON A SURE THING is here! Grab your copy today! ✮✮✮

It's so easy being best friends with a gorgeous, talented, charming guy.

Said no woman ever. Except me.

My friendship with Miller is a sure thing — he’s my plus one, my emergency contact, and my shoulder to lean on. He’s also been by my side helping me raise one helluva awesome kid who’s the center of my world.

Nothing will change our easy breezy friendship. Until I have the bright idea to convince him to start a new band with me.

Trouble is, our sizzling chemistry in the recording studio is getting harder to ignore, no matter how risky it might be.

Piece of cake. NOT.

Performing with the sweet, sassy and insanely wonderful Ally is like one gigantic obstacle course of challenges for my libido. And my libido is one sexy love song away from kissing her senseless and taking her home.

But, I’m not a serious kind of guy, and she’s not a one-night-stand kind of woman. If we cross the horizontal line, we might risk our sure thing and end up out of tune forever... 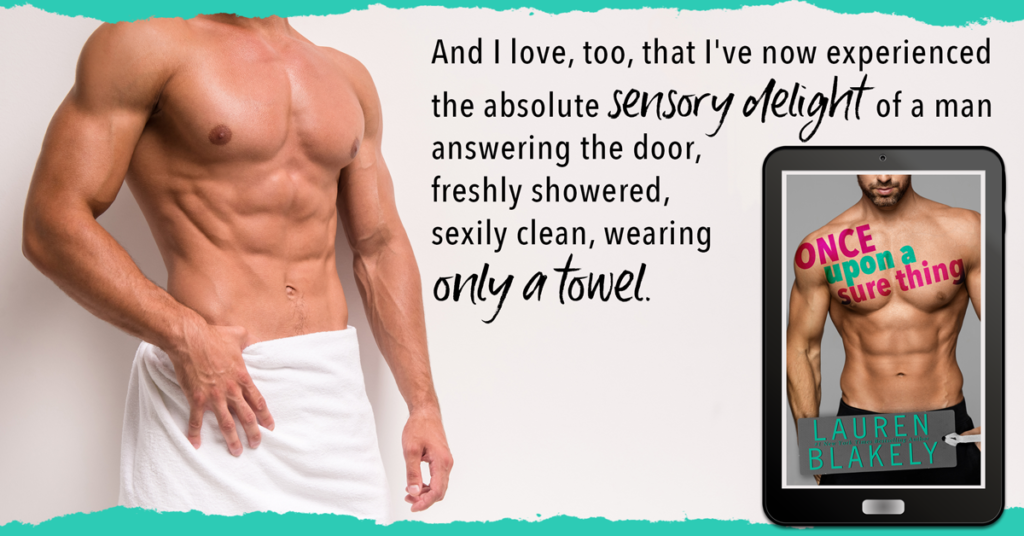 ADD IT TO YOUR GOODREADS TODAY!

"Once Upon a Sure Thing is another must-read rom-com from Lauren Blakely. It's just as heart-meltingly romantic, just as sinfully sexy, and just as achingly sweet as the first book in the Heartbreakers Series." - Yvette at Nose Stuck in a Book

"This book was HOT. Sizzling. The build up, the banter, just everything about these two is amazing. The anticipation was killing me. And when they're together? Holy moly wow, hot as hell!" - Escape into a BookSite

Ally~
Miller holds open the hobby shop door for me. “After you, my warrior princess. I believe we have a castle to create.”
“Chloe left me a list of items to pick up, since she’s seeing her therapist.”
“Never miss a shrink visit, I say.” Miller stops in front of a remote-controlled helicopter display. “How are they going for her, anyway?”
“Good. She’s almost done with the appointments. She’s doing so well now, but it took a while,” I say, smiling as we go inside, proud of my girl.
“I’m glad she’s doing better. It’s all because of you.”
I wave off the compliment as we head down the aisles. Pom-poms and fabrics abound, nestled alongside scrapbook boxes and glitter glue, which cuddles with glitter guns and ribbons. I stop at an aisle bursting with silver ribbons, polka-dot ribbons, and ribbons with tassels. I scratch my head. “I don’t understand why there are so many ribbons.”
Miller leans in close and whispers, “The better to tie you up with, my pretty.”
A tingle spreads over my shoulders, surprising me, even thought I’m not surprised by his words. He’s a natural-born flirt, and I’m used to his naughty banter. It’s never directed toward me, per se. He’s just having fun. It’s Miller being Miller, like when we play Bananagrams and he tries to make as many naughty-sounding words as possible, like caulk and diphthong. “In that case, let’s make it a polka-dot ribbon. I can wear it with my famous polo shirts and ponytails,” I say, referring to the super-sweet style I wore when I sang online with my brother.
“Ooh, that makes it even naughtier, and it proves my point.”
“What’s that?”
He holds up a finger. “I have a hunch craft stores are frequented by the Fifty Shades crowd.”
I laugh. “DIY BDSM-ers?”
He wiggles his eyebrows. “Ribbons are for typing pretty wrists.” He circles his hand around my wrist, sending another unexpected charge through me. I do my best to ignore the sensation. He lets go quickly and leads me to an aisle of wooden frames, birdhouses, and, oddly enough, paddles. “Those paddles are not for school projects, I tell you.”
“Whatever are they for?” I ask, feigning innocence.
Miller mimes spanking my butt. Next, he gestures to the candle-making section. “Exhibit B that hobby shops are fronts for kinky sex clubs—just imagine all this wax dripping on bellies and butts tonight.”
“How on earth am I supposed to work on a project with Chloe now that you’ve put these thoughts in my head?”
He runs a hand lightly over my hair and says in his raspy baritone, “I suspect those thoughts were already there.”
Were they?Are they? Images scroll through my mind, mostly involving ribbons.
EXCERPT TWO:
~Miller~
She sings like a sinner. She sings like an angel. She sounds like whiskey and sugar. I’ve only ever known her for her church-bell voice, but now she’s a glorious mix of dirty and sweet, and I never knew she had it in her.
But I can’t marinate in this change-up. It’s showtime for me.
Grabbing the mic, I dive into my first line as I gaze into those blue eyes of my friend. Only I have to think of her as Honey, so I sing to the new woman about how I can’t do without her, how I need her now.
Something is in the air between us when we sing, something charged. Something that hasn’t been there before. Stage chemistry.
I move closer as if I’m drawn by the pull of gravity that I have no control over. We lock eyes and everyone else fades away. I’m still in shock that I’m loving singing a song with my best friend.
That’s what terrifies me. Especially since we sound good together, and we move well together.
Maybe we even look good together, as we belt out this hot-as-fuck duet, and for the first time we’re not butchering a holiday tune or destroying “Total Eclipse of the Heart” at karaoke. As she moves closer to me, we sing the final chorus like it’s going out of style, and when the music softens, I can’t resist. I finger a strand of her blonde wig, the coconut scent from her lotion floating into my nose.
Reluctantly, I let the hair fall.
Clapping rings loud in my ears.
Jackson, Miles, and Campbell give a standing O. Jackson holds up his phone, pointing to it, letting me know he caught it on video.
“Chemistry,” the guys all shout, practically in unison.
But I’m not supposed to have chemistry with my best friend.
That’s the problem.
“What the hell just happened here?” I whisper to Ally, befuddled.
Her mouth opens, and her eyes go wide, and she blurts out, “I have an appointment. I need to go.”
She takes off, leaving in her wake a trail of chemistry and coconut and confusion. 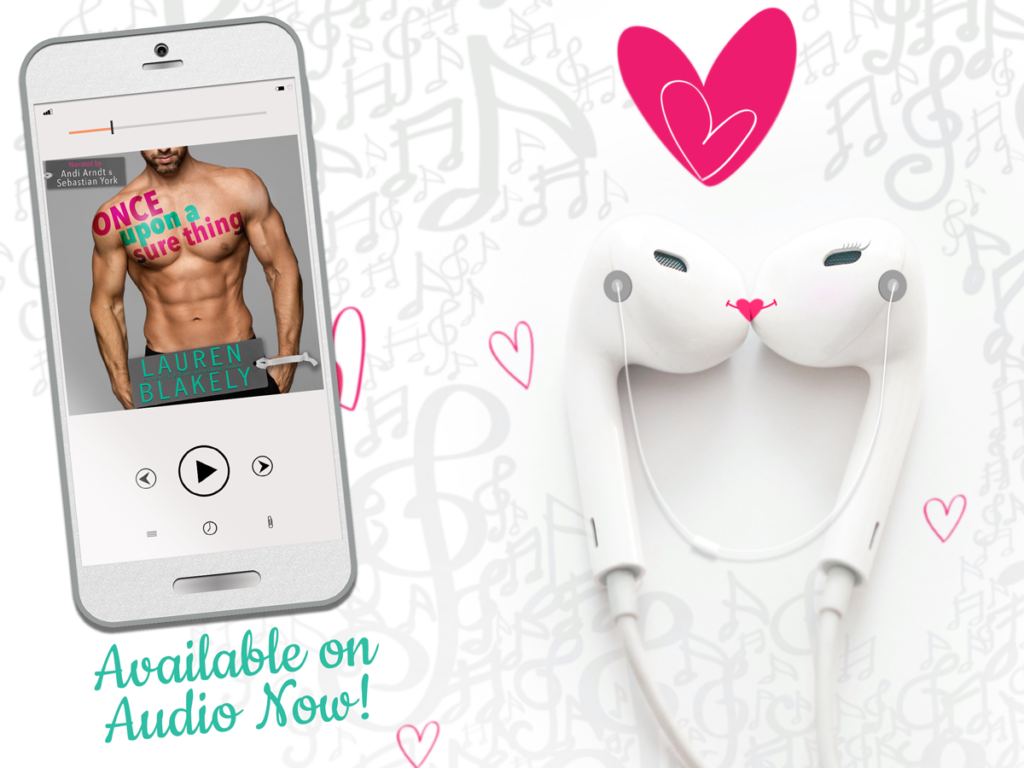 The Heartbreakers is a series of standalone rom-coms and will be narrated by Sebastian York and Andi Arndt! Grab your copy of ONCE UPON A SURE THING today! https://adbl.co/2OYzhlh

"Exhilarating, titillating, and hot as heck! An absolute reading enjoyment! I am re-reading it again! Don't miss this one!" - As You Wish Reviews

We’ve got your next binge read right here! Don’t miss all of the standalone full-length novels in The Heartbreakers Series! 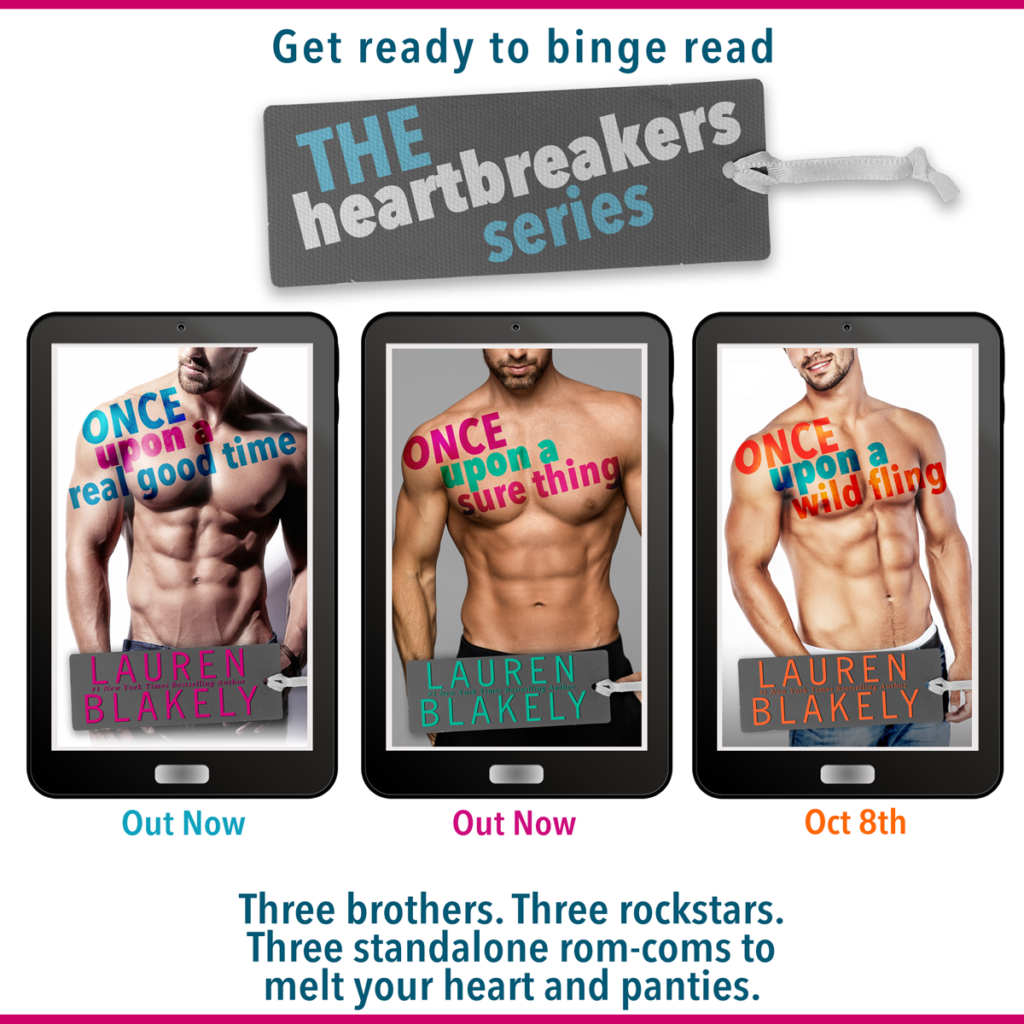 The Heartbreakers Series—full-length, standalone romantic comedies with no cliffhangers releasing within one month so you can binge read these sexy novels! You can indulge in three delicious romances -- a sexy one-night stand with an off-limits woman, a best-friends-to-lovers tale, and a falling-for-my-buddy's-sister love story. All come with banter, sexy times, and single parents! So get your one-clickers ready for these sexy & charming men! Each love story will make you laugh, swoon and fan yourself from the heat!

September 10: Once Upon a Real Good Time

September 24: Once Upon a Sure Thing

October 8: Once Upon a Wild Fling 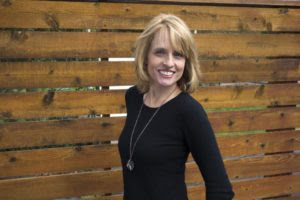 About Lauren Blakely: A #1 New York Times Bestselling author, and #1 Wall Street Journal Bestselling author, Lauren Blakely is known for her contemporary romance style that's hot, sweet and sexy. She lives in California with her family and has plotted entire novels while walking her dogs. With fourteen New York Times bestsellers, her titles have appeared on the New York Times, USA Today, and Wall Street Journal Bestseller Lists more than 100 times, and she's sold more than 2.5 million books. In September she'll release ONCE UPON A SURE THING, a sexy best-friends-to-lovers romance. To receive an email when Lauren releases a new book, sign up for her newsletter! laurenblakely.com/newsletter
Website ** Facebook ** Twitter ** Newsletter ** Goodreads