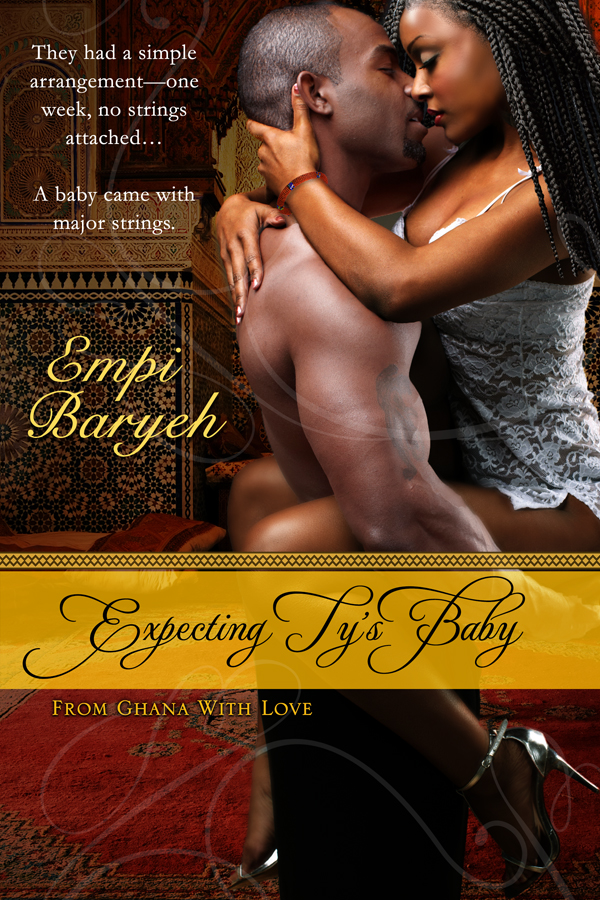 Abandoned by her father at a young age, beauty therapist, Patricia Owusu, has learned the hard way that men can’t be relied on. She’s determined to make it on her own without falling into the cultural trappings of marriage. However, when she finds herself pregnant after a torrid love affair with African-American financial consultant, Ty Webber, she discovers one man’s resolve to stick around.
When Ty discovers Patricia is carrying his baby, he offers marriage; because real men take responsibility for their actions. He isn’t prepared for Patricia’s stubborn determination to make it on her own. But nothing will prevent him from claiming his child or the woman he considers his.


Can Ty convince Patricia to take a chance on him to help provide a loving home for their baby, or will Patricia’s mistrust lead her to miss out on true love and rob her child of the type of father she never had?


“I don’t need taking care of, you know,” Patricia said when they stepped outside. Her voice came out low, a whisper, which nonetheless projected in the still warmth of the night.
After several seconds without a response from him, she turned sideways. He stared ahead, his profile stoic. Finally, she heard his deep intake of breath.
He looked at her, and thunder might as well have struck after the flash of…annoyance? Impatience? Incredulity?
“Are you always on the defensive?”
Aggravation. Despite the balmy, breezeless air, Patricia shivered. Perhaps she should have been scared, but she wasn’t. Somehow, Ty didn’t strike her as the kind of man whose patience wore thin as easily as wind blew away flakes of cotton. Yet, she also realized she’d pushed a button or two between yesterday and today.
She began to say something, but her response staggered as she realized she didn’t know how to answer his question. She sighed. “It’s always been just me and my mum. I guess I’m simply used to having to stick up for myself.”
His look softened. “Trish, I know you’re a strong woman. Hell, it’s one of the things I admire about you. But did it occur to you I only wanted some alone time with you?”
She couldn’t help it. She giggled. “You could have just said so.”
“In that case, how about this?”
He faced her fully, subjecting her to a powerful blast of his magnetism. Electricity jolted through her, and she realized he’d touched her; warmth infused her body where his hands bracketed her waist.
The next instant, she was plastered against him, her soft abdomen privy to the state of his desire. His heated breath wafted over her face, a mix of him and the whiskey he’d had at dinner. An avalanche of sensations, fierce and unrelenting hit her in the gut.
Then the worst thing happened. The most embarrassing moment of her life.
She threw up.
On him.
For several seconds, she could only stare in horror at her dinner, now a less than palatable concoction splattered on Ty’s clothes and shoes.
He still held her as she doubled over, one hand on her shoulder, the other rubbing her back.
“Trish, what’s going on?” He pushed back a few strands of her braids hanging loose from the confines of her up do.
“I am so sorry,” she said.
“We need to get you to a hospital.”
Crap! Her stomach lurched again, and she figured out what had triggered the emesis. Thankfully, what came out the second time was minimal. She took in a deep breath, exhaling through her mouth. It seemed to help.
Ty held up the bottle of water he’d taken with him from dinner. “Here—”
“Please stop talking,” she gasped, turning away from him. “I need a minute.”
“This could be food poisoning. You need a doctor.”
“I don’t, and it’s not food poisoning. It’s the alcohol.”
“You didn’t drink.”
“No, but you did.”
His features assumed a frown, his confusion absolute. “You’re sick because I drank?”
“I’m not sick. I’m—”
She stopped abruptly, tossing different possible explanations in her head, all of them partial truths. No matter what anyone said, keeping quiet and outright lying were not the same. She wasn’t prepared to do the latter, but she’d spoilt her chances of doing the former.
“I’m…uh.”
His eyes narrowed. “You’re what?”
“I’m…”
Shiiit.
She couldn’t believe she was going to tell him. “I’m pregnant, Ty.”

"Well written, enchanting, and heart-warming, this is one romance fans should love." - TAYLOR JONES (Reviewer)
"Poignant, charming, and full of wonderful characters, Expecting Ty’s Baby will warm your heart right down to your toes. A wonderful love story and a worthy addition to the series." REGAN MURPHY (Reviewer) 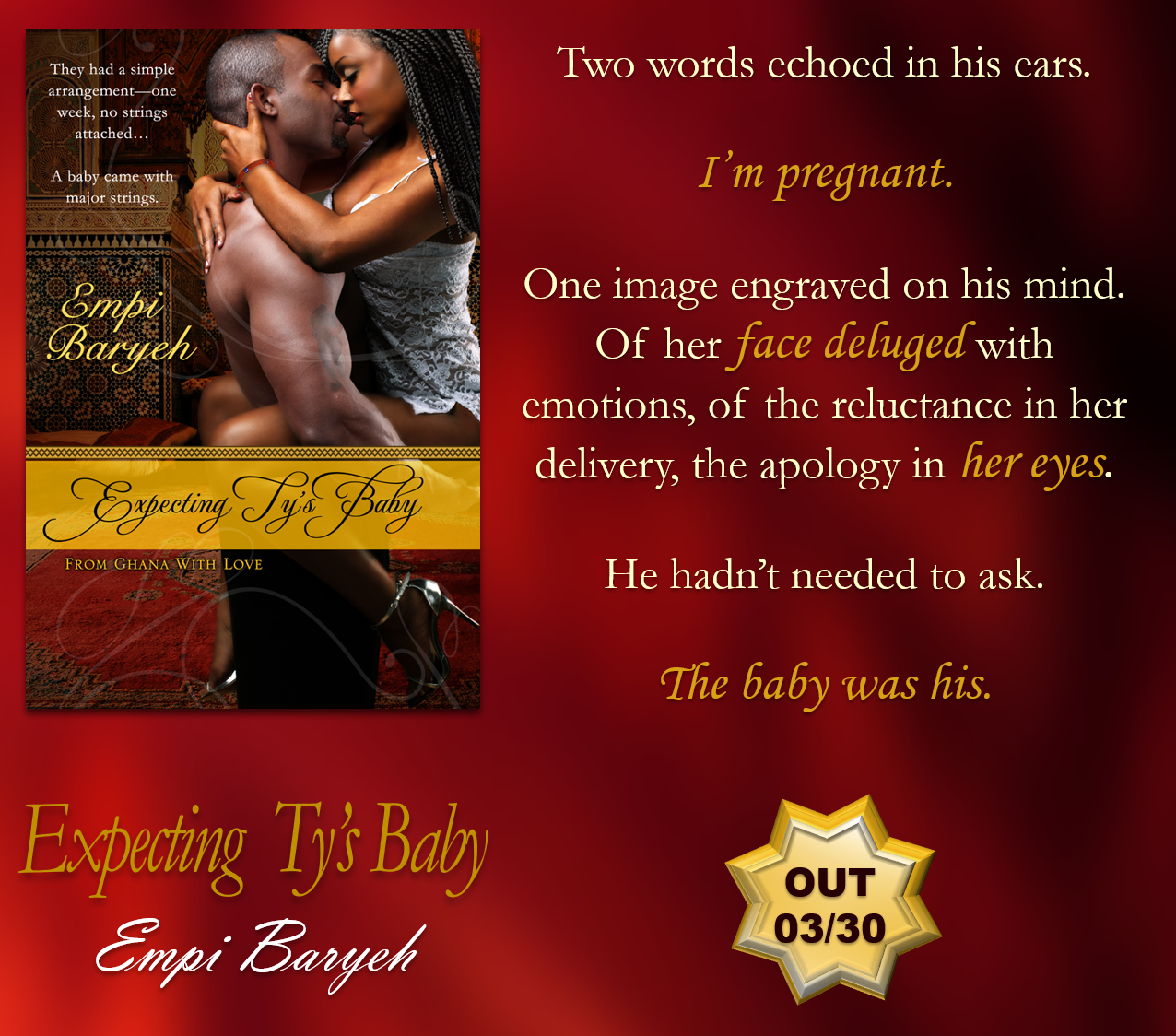 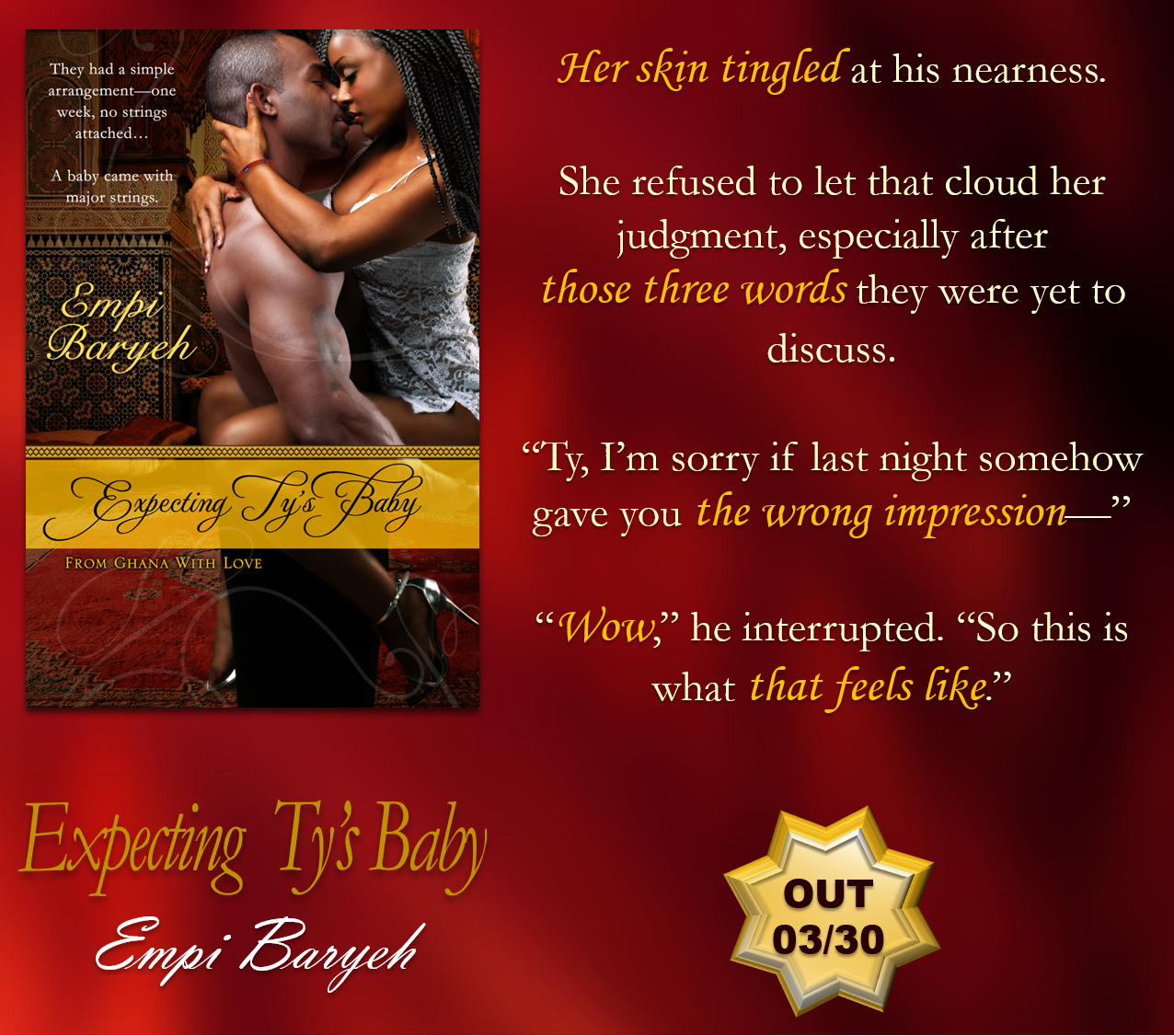 GIVEAWAY
Enter for a chance to win a $15 Amazon GC.

Missed Book 1 in the series?
Grab it in ebook, paperback or audiobook formats 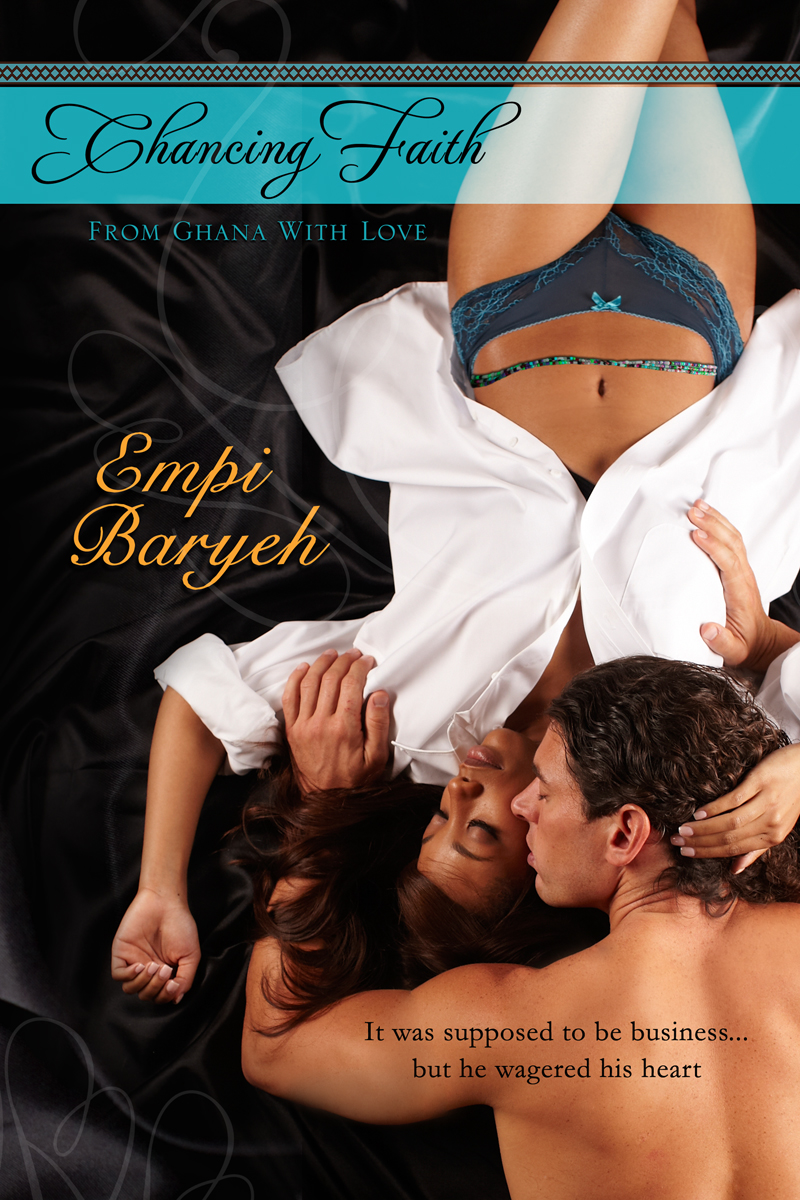 He didn’t do short-term relationships…
American ad exec, Thane Aleksander, doesn’t date co-workers either—until business takes him to Ghana, West Africa, and he meets Naaki. Now he’s at risk of breaking all the rules. Can he stop this headlong fall before it’s too late?
Until he met her!
Naaki Tabika has a burning need to prove, to herself and others, that she’s more than wife and mother material. To do so, she’s prepared to give up everything for her job. Meeting Thane, however, makes her want to get personal. But falling for her boss could destroy her career. Will she be willing to risk it all for the one thing that can make her truly happy?
Two divergent cultures, two different races, two career-driven professionals, only one chance at true love—will they find the faith to take it, or will their hearts be sacrificed on the altar of financial success?
Add (Chancing Faith) to Goodreads 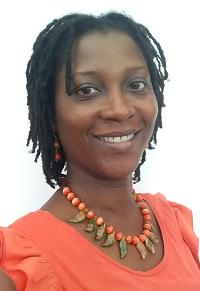 Empi Baryeh is the award-winning author of Most Eligible Bachelor (Book of the year, 2017 Ufere Awards). She writes sweet and sensual African, multicultural and interracial romance, which happens to be her favourite genres of romance to read. Her interest in writing started around the age of thirteen after she stumbled upon a YA story her sister had started and abandoned. The story fascinated her so much that, when she discovered it was unfinished, she knew she had to complete it. Somehow the rest of the story began to take shape in her mind and she's been writing ever since.