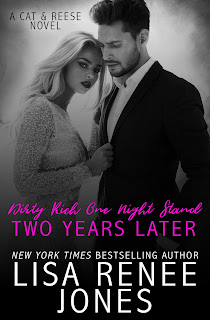 One and done. It was supposed to be one night. I knew his type. You don't fall in love with a man like Reese Summer, but I did. He swept me off my feet, seduced me, refused to take no for an answer. We became a power couple. The syndicated crime reporter. One of the country's top criminal attorneys. The fantasy became happily ever after until the next big trial of the century. Reese is defending a woman accused of killing her father for billions. I'm reporting on the case. And then the world around us explodes. The trial turns to danger right as a secret from Reese's past shocks me. Someone who wants to destroy our happily ever after. Someone wants to end me.

CONTINUING CAT AND REESE'S STORY! Read the beginning of their story in Dirty Rich One Night Stand - AVAILABLE NOW!

“Cat, I’m not guilty.” “I know.” “You don’t,” he says, his voice hard now. “I feel that in you now.” He squeezes his eyes shut. “Damn it.” “I trust you, Reese, but the idea that other people might not, feels weird which is probably why I just want to shut this down. It’s about control. I’d have some kind of control I don’t have right now but it’s not your fault. We need to end this. Your career matters.” He lowers me to the couch, and comes down on top of me, like he needs to hold me in place to keep me from running. “You matter. Only you.” “Your career matters,” I repeat. “It matters to you and me. It matters to us and our future. It matters to our future family. Pay her off.” “Our family?” “Yes. Our family, Reese. We want one. Don’t we?” “Yes, sweetheart. We do.” “Then let’s go downstairs and end this.” “Not yet,” he says. “I’m not ready. We’re not ready.” “We are ready. We’re strong together. We need to show that strength now.” “You’re strong,” he says. “So damn strong, Cat, and I swore when you said ‘I do’ I’d keep you from having to be that strong. I’m supposed to protect you.” “We protect each other.” “I need to feel you right now,” he says, his mouth closing down on mine, a deep drugging lick of his tongue stroking against mine, possessiveness, passion, and something I’ve never felt in Reese in that kiss: desperation and fear. He’s afraid of losing me and I feel that same fear, for no reason. We’re in love. We’re happy. That isn’t going to change because of these allegations. *** REESE... I kiss my wife, who is my life, and I will let no one take her from me. I want her to know this. I want her to feel, not just hear, how much I love her, and yet, there is a rage of anger inside me I need to bury and control. I have to go downstairs and act like I’m king of the fucking world when everything I love is right here in this room, and delicate, too damn delicate. As surely as I think those words, though, Cat bites my lips, and not gently. “Get out of whatever place you are in your head,” she demands. “Right now. I know what you need, so use me.” “I never use you, Cat.” “I use you,” she says. “Every time I need out of my own head, I drive you to the edge until you fuck me the way I want to be fucked. Until you make me forget and,” she grabs the lapels of my jacket, “stop what you’re doing right now. Stop acting like we’re different because that makes me think things that I didn’t think before, that I know aren’t true, but you’re scaring me. You’re making me think this is going to change us.” “It’s not,” I say roughly. “I’m just angry.” “Then be angry. Deal with it, with me. Show me.” I don’t need to be pushed any further. I need her. My mouth closes down on hers, my tongue licking into her mouth in a deep, hungry kiss, and I let her taste everything I feel. My fear of losing her, and us. The gut-wrenching moment I heard the allegations against me. Just thinking about how that must have affected Cat, gutted me. Just thinking about her actually believing it, tore me apart. And some part of her has to doubt. It’s human. I don’t want her to doubt. I tear my mouth from hers. “You’re all I need. You’re what I needed before I even knew I needed it.” I kiss her again and then raise up on my knees to shrug out of my jacket, tugging away my tie and tossing them both. I’m back with Cat in all of sixty seconds, kissing her again, my hand caressing her waist, reaching up to cup her breast. She arches into my touch and while moments ago, I just needed inside her, the anger in me refocuses on the here and now, and Cat. It’s all Cat. I want her to moan for me. I want her to come for me. I want and want where she is concerned, and she needs to feel that now.

New York Times and USA Today bestselling author Lisa Renee Jones is the author of the highly acclaimed INSIDE OUT series. In addition to the success of Lisa's INSIDE OUT series, she has published many successful titles. The TALL, DARK AND DEADLY series and THE SECRET LIFE OF AMY BENSEN series, both spent several months on a combination of the New York Times and USA Today bestselling lists. Lisa is also the author of the bestselling WHITE LIES and LILAH LOVE series. Prior to publishing Lisa owned multi-state staffing agency that was recognized many times by The Austin Business Journal and also praised by the Dallas Women's Magazine. In 1998 Lisa was listed as the #7 growing women owned business in Entrepreneur Magazine.