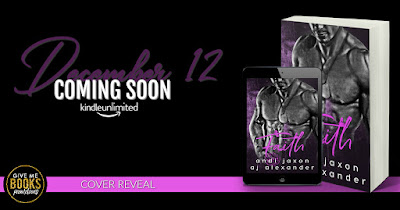 Justin
I originally joined the Navy as an escape, to become more than a country farm boy. Being a Navy SEAL turned me into a man, but one without a life outside the military. I thought that was all I needed. Until everyone around began to find their Happily Ever Afters’. I realized my life was missing love, something I've been longing for. All it took was one simple letter from home to remind me that everything I ever needed was right there waiting for me.

Becca
Losing the love of your life before he was able to meet his child was the hardest thing I’d ever gone through. I tried to move on with my life, and find a new sense of normalcy with my daughter and myself. One simple holiday act of kindness has set my carefully choreographed life into a tailspin. I could never have guessed writing a simple letter to a deployed sailor would bring us to a place we can finally call ‘Home’ again.

Can these two trust in the things they can not see to find true happiness?

**While Faith can be read as a standalone, it is best enjoyed after reading Honor, Love, Fate, and Power.**

All free in Kindle Unlimited

Raised all over the USA, Andi Jaxon is an interesting mix of East Coast meets West Coast with a little bit of Southern thrown in, just for good measure. She drinks too much coffee until it's late enough to drink too much wine and while her husband is defending his country, Andi is sexually frustrated for your freedom. If you see Andi online, she is probably sitting in a closet, hiding from her kids.

Fluent in sarcasm, Supernatural, and song lyrics, AJ Alexander likes talking to people and finding what makes them tick, though that probably has more to do with her Psychology degree. Being married to a man in uniform means she has lived in a lot of places, survived seeing her husband for half the amount of time I’ve been married, and spent a lot of time raising her kids alone. AJ loves to write messed up psychos with lots of angst and happily ever afters that have to be worked for. Women with sass and backbone, men with a twisted hero complex and the need to control are her favorite to read as well as write.