SALE BLITZ - Welcome to the Cameo Hotel by K.I. Lynn 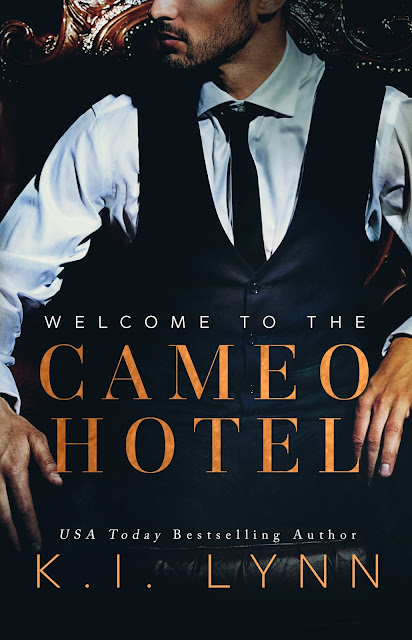 I get what I want.
When I walked through the door of the Cameo Hotel I didn’t expect such a beauty to be working the front desk.
The effect she has on me is intense, and I make her life a living hell because of it.
I love her spirit, her internal defiance when completing the most inane task I assign her. My two week stay has turned into unending, just to be near her.
She’s under my every command if she wants to keep me happy.
There’s one last thing I want.
Her. 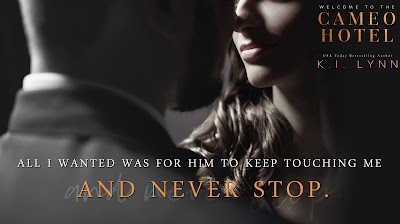 
The walk to his room was second nature—a quick elevator ride, take a right and go down four doors. A swift rap of my knuckles against the door, and then I waited for the overwhelming force that was Gavin Grayson.
“Hello,” he said as he opened the door. No scowl to greet me, no anger. There was a small upturn of his lips, a little more prominent on one side than the other.

A shudder rolled through me, my heart doing double time again.
“What’s wrong tonight?” I asked as I stepped into his room.
“You’re not in it,” he said.
My stomach flipped, and I felt heat flood my cheeks. How was it that in a few short weeks he had taken over my heart? I wanted, yearned for his praise. To get caught up in his eyes, loving the way they would soften and grow heavy as he looked at me.
I drew in a stuttered breath as he stepped forward and towered over me. In heels I was a decent five-feet-eight, but Gavin had to be a few inches over six feet tall—a commanding presence as he loomed over me.
“Emma?” He was so close I could feel his breath on my skin.
“Hmm?”
“I want you.”
The muscles in my thighs clenched and I stretched up toward him, almost begging him closer. “Yes.”
“To stop looking at me like that.”
The haze he covered me with suddenly cleared as I looked up at him. My stomach dropped as I tried to comprehend what happened. “What?”
He stepped away, his back turned to me. All of his muscles were tense, his fists clenching at his side.
“If that’s what you want, what do you need?” I asked.
His head fell back. “I thought I’d made that obvious.”
“I’m not sure,” I replied, more than a little surprised at how breathy my voice was. “I’ve gotten a lot of mixed messages.”
He moved back toward me. “You have me conflicted.”
“How so?”
“Because the last time I wanted a woman anywhere near this much, things didn’t end so well,” he began. “Because you’re young. Because you work for the hotel and not for me.” He reached out, his fingers caressing my clavicle before slipping up my neck. “Because nothing has ever seemed as taboo as your lips.”
My knees felt weak as he moved closer, my nipples tightening. There was no resistance as I waited with bated breath.
His lips were soft against mine, supple. A taste, a sample. It was perfect, and an electric pulse moved between us. Every ounce of want and desire sat in the small gap between our lips.
A squeak left me when he suddenly pressed forward, kissing deeper and more intensely than before. His free arm wound around my waist, pulling me closer to him while his mouth opened. I followed suit, wrapping my arms around his shoulders, pulling him closer. It was forceful and filled with more passion than I’d ever encountered, so much that it ignited an inferno inside me.
All I wanted was for him to keep touching me, to never stop. 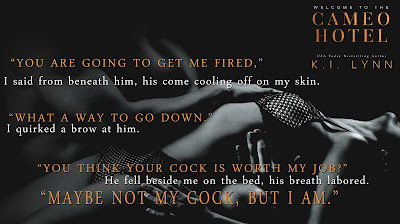 K.I. Lynn is the USA Today Bestselling Author from The Bend Anthology and the Amazon Bestselling Series, Breach. She spent her life in the arts, everything from music to painting and ceramics, then to writing. Characters have always run around in her head, acting out their stories, but it wasn't until later in life she would put them to pen. It would turn out to be the one thing she was really passionate about.

Since she began posting stories online, she's garnered acclaim for her diverse stories and hard hitting writing style. Two stories and characters are never the same, her brain moving through different ideas faster than she can write them down as it also plots its quest for world domination...or cheese. Whichever is easier to obtain... Usually it's cheese. 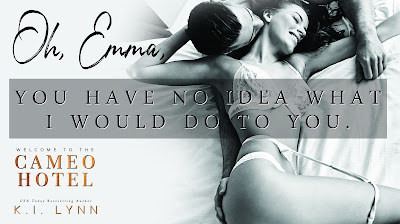