Today we have the release day blitz for Covert Games by Katie Reus! Check out this new romantic suspense and grab your copy today! 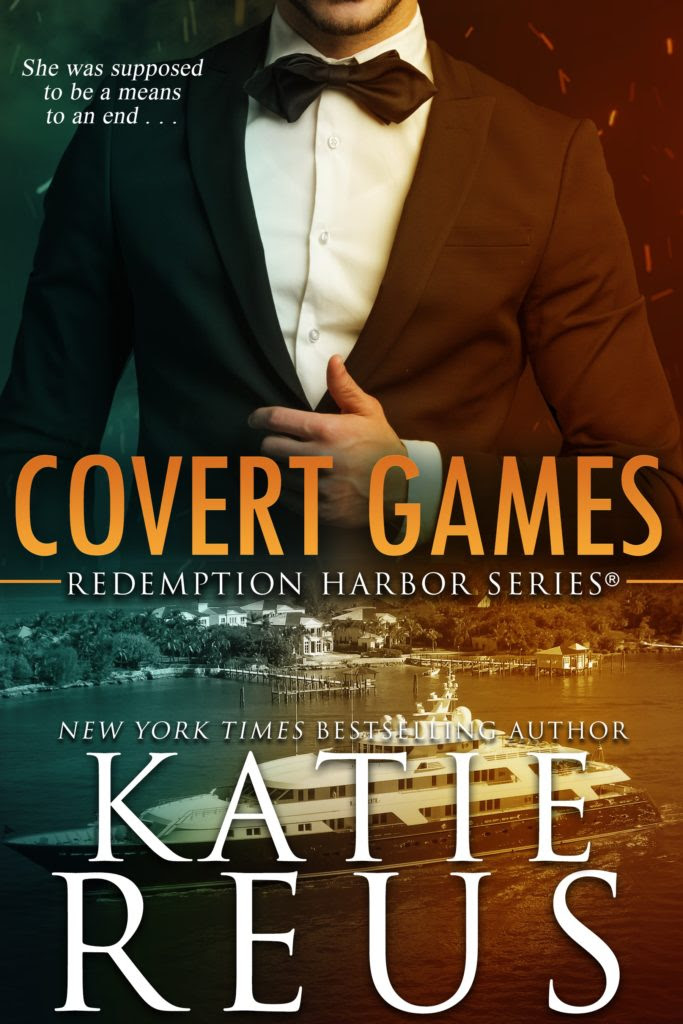 She was supposed to be a means to an end… Redemption Harbor Consulting’s greatest enemy, Alexei Kuznetsov, is in their sights. For RHC cofounder Leighton, toppling the treacherous criminal’s empire is one more small step toward making up for his own past. To destroy Kuznetsov, he’ll go through the Russian’s niece, a woman Leighton suspects may also be guilty of dirty deeds. A woman he doesn’t count on wanting…who boils his blood and makes Leighton want things he doesn’t deserve with someone he can’t have. Now she’s everything to him… Despite other prospects, family loyalty has Lucy Carreras running one of her uncle’s prosperous hotels. But the longer she observes its operations, the more she believes the elegant establishment is host to some shady exploits. When her suspicions are confirmed by Leighton—a dangerous man straight out of her fantasies—Lucy’s entire world explodes when she learns just how evil her uncle’s sins are. Now she can’t stand by and let it continue. She and Leighton will take Alexei down together…if they can survive the deadly storm hurtling toward them.

“I’m pretty sure I picked up a tail on the way back,” Leighton said quietly into his phone. He was in the bathroom of the Presidential Suite with the shower running. He’d done a scan for bugs and other electronics and was certain he wasn’t being listened to, but he was still taking extra precautions. Right now more than ever they had to be careful. “Did you get a good look?” Colt asked. “No. Just a feeling I’ve had before. Could be nothing but my instinct tells me otherwise. And I didn’t get that feeling until I got close to the actual casino.” “Well, you did go out with Kuznetsov’s niece. He or someone who works for him could be keeping an eye on you. But…do you need to pull out?” Colt asked, his tone deadly serious. “I think if my cover was blown, I’d know.” He’d already thought about it and he wanted to stay put. “I don’t want to pull out yet. I want to scout the casino floor again at least one more night, see what we can pick up on cameras. Gage still hasn’t completely infiltrated their system.” And Leighton didn’t think Kuznetsov would stop running women simply because his niece had stumbled onto a small portion of his operation. No, the asshole would just get smarter about it. Kuznetsov liked money too much. “All right. We’ve all got your back regardless. And if something happens, I have no doubt you’ll be able to fight your way out.” Leighton half laughed. “Glad you’ve got so much faith in me.” “So how was lunch with her? Did you get a better feel for her?” Leighton wasn’t certain how to answer that. He decided to go with the truth, however. “I really like her.” Colt was silent for a long moment. “Like her, like her? Or…” “Like her, like her.” “You’re serious.” Colt’s tone was neutral. “Yeah. I kissed her. And I can tell myself that it was all part of the job but I’d be lying. You have a right to know. I’m not going to screw things up but I am seriously attracted to this woman. It took me by surprise. I…didn’t expect any of this. Flat out, I just like her. After hearing the recording today, it seems pretty clear she’s not involved with her uncle’s operation. And she volunteers at a suicide hotline.” He felt like a fool for letting his emotions get entangled but he wasn’t a damn robot, and Lucy Carreras had gotten under his skin. Colt let out a rough sigh. “This isn’t the end of the world. Maybe it’s a good thing. Because we might need to use her as an asset.” Leighton’s jaw tightened. He didn’t like the thought of using Lucy at all or even thinking of her as an asset. He understood this op was about more than him and his wants and needs, but that didn’t mean he had to like it. Lucy was more than an asset.

Katie Reus is the New York Times, USA Today, and IndieReader bestselling author of the Red Stone Security series, the Moon Shifter series and the Deadly Ops series. She fell in love with romance at a young age thanks to books she pilfered from her mom’s stash. Years later she loves reading romance almost as much as she loves writing it. However, she didn’t always know she wanted to be a writer. After changing majors many times, she finally graduated summa cum laude with a degree in psychology. Not long after that she discovered a new love. Writing. She now spends her days writing dark paranormal romance and sexy romantic suspense. Her book Avenger’s Heat recently won the Georgia RWA Maggie Award for Excellence in the fantasy/paranormal category.