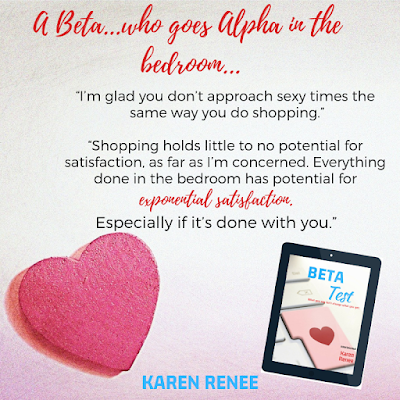 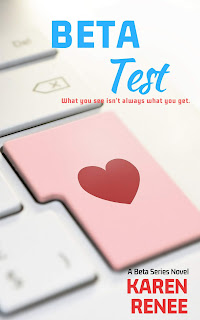 Justine is adjusting to life after a divorce. A friend insists on setting her up with a man. She will not have another Alpha male in her life. Her next man will be an easy-going “Beta” male.
James does not believe in long term relationships. After he meets Justine, he's certain bachelorhood is it for him. When work brings James to her home, their chemistry ignites.
Will they give love a chance?

Our table was situated next to the picture windows. We had a clear view of the river and the boat traffic moving around the Main Street bridge. The lights of the over-sized Christmas tree at the Landing glittered in the night.
Our waiter returned and placed Justine’s salad plate in front of her. He placed a plate in front of me, and said, “Wedge salad, no dressing.”
I looked at the plate and it was nothing but lettuce, cut in a wedge. Once the waiter left our table, Justine giggled and it was obvious she was fighting to keep it under control. I was feeling a little self-conscious, with her laughing so much, but she was especially beautiful in the dim lighting, giggling with abandon.
Once her hilarity was under control, she looked at me. “Well, that’s probably the most costly quarter-head of iceberg lettuce in the country.”
“No doubt,” I muttered. “Maybe I’ll ask for a doggie bag and make some kick-ass BLTs out of it.”
If a snort could be feminine, Justine pulled it off, and croaked out, “Roger Rabbit would be affronted at the notion!”
I chuckled. “Then it’s good he’s a fictional character and that I don’t have a rabbit at home. At least now we know why the waiter had that tone with me earlier.”
“Yeah,” she replied on a chuckle.
By the end of our meal, Justine and I both had doggie-bags. Mine included the bulk of my lettuce wedge and a few bites of steak for Zeta. Justine’s bag had half her chicken and a fair amount of creamed spinach. She had saved room for dessert and the ‘Death By Chocolate’ cake did not disappoint. However, it was at that point of our evening that I realized my mistake. I should have insisted on a Saturday night date and reserved a room at the DoubleTree Hotel where the steakhouse was located.
I walked Justine out of the restaurant and noticed the waiter, the bartender, and another man at a table eyeing Justine. My shoulders tightened with my tension. Justine was oblivious to the show she was putting on for the men in the room, and that made her show all the better. Once we were in the corridor leading to the exit, I slung a possessive arm around Justine’s shoulder and was rewarded with a strong whiff of her spicy floral perfume.
She looked up at me with questioning eyes. “Something wrong, there, James?”
I tipped my chin down toward her. “Nope, not any more. Now it’s time to go to my place and get to the good stuff.”