Enemies with Benefits, an all-new contemporary romance from Roxie Noir, is now live!

I don’t love him. I don’t even like him. I just want him.
Eli Loveless was my nemesis from the first day of kindergarten until we graduated high school. Everything I did, he had to do better - and vice versa. The day he left town was the best day of my life.
Ten years later, the day he came back was the worst.
Now he’s my co-worker.
Grown-up Eli Loveless is sexy as sin. He’s hotter than asphalt in the summer. The irritating kid I once knew is gone, and he’s been replaced by a man with green eyes, perfect abs, and a cocky smile.
It’s bad that I want him.
It’s worse that he wants me back.
There are looks. There are smirks. There are smiles that make my panties burst into flame.
And then there’s a shared kiss that leads to the hottest night of my life.
This is no office romance. This is a five-alarm fire.
What’s a girl to do when the man I can’t stand is the one I can’t stop lusting after?
Enter into a friends-with-benefits agreement, of course.
No dates. No relationship. Just blisteringly hot sex, because if there’s one person I could never fall for, it’s Eli.
...right?

Excerpt:
Don’t let him get to you, I tell myself, but it’s a feeble attempt because he’s already gotten to me. Eli’s been getting to me since we were five years old, and platitudes aren’t going to help the situation now. Just don’t do anything stupid, I tell myself, and that one seems much more reasonable. That one seems like something I can handle. The door opens. I brace myself. If I had a shield right now I’d put it up. “Violet?” Eli asks. Goddamn it. “Yes.” “You okay?” he asks, for the second time in two minutes. “I’m fine,” I say, all the pent-up anger and irritation leaning on that second word. “I’m just checking,” he says, letting the door shut behind him. “You practically ran out of the brewery like you were going to vomit or have a heart attack or —” “— or before I finally lose my shit with you in public for acting like I need dart-throwing lessons?” “Well, you do,” he says. “I don’t!” I say. “I don’t care about darts! I don’t care that I’m bad at it!” Eli just laughs. Somehow, we’ve moved closer to each other, close enough that I can feel his laughter rippling through the night air. “Liar,” he says. “You’re pissed that I’m better than you at something and you’re terrible at hiding it.” “No,” I say, swallowing hard. “I’m pissed that you followed me out here to keep gloating.” “I followed you out here to see if I should call an ambulance,” he says. “Liar,” I say. I could swear that neither of us is moving, but we keep getting closer by centimeters, degrees. My heart feels like it’s punching my ribcage, my pulse racing. I’m praying that he can’t hear it and that he can’t tell that I feel electrified, like if he touches me I’ll spark. I’m furious, and I want him, and I’m furious that I want him. “You think I wasn’t worried when you sprinted out of there?” he says, his low voice getting louder, irritation edging in. “I didn’t sprint.” “Do you really think I’m incapable of concern?” Eli asks, his jaw tensing, his eyes glinting, the dark making them gleam gray. “Not incapable,” I say. I look him dead in the eye. My heart seizes. “So I’m not a total monster,” he says, eyes blazing, voice dangerous and low. His anger’s so real that it’s almost palpable. I feel like I could reach out and grab it, wrestle it with my own. “I didn’t say that.” “But it’s what you think.” His eyes flick to my lips again, like they did inside, only now they stay linger there like he can’t tear his gaze away. Please, whispers my body. Hell no, whispers my brain. “Since when do you care what I think of you?” “I don’t,” he says, and his mouth finds mine. 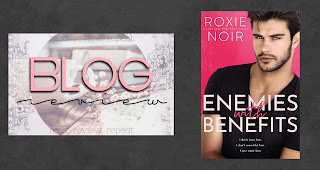 The title of this book is a trope within itself. I love these types of stories and Roxie has done an amazing job with her version. There are plenty of laughs reading Violet and Elis story. They might think they are completely different but really they aren't at all. They just go about their lives in different ways. To make this story even better there is a bit of intrigue surrounding the pair and where they work. Add in the great secondary characters which all added to make this such a wonderful read.
This is the first book in the Loveless Brothers series, and I would really love to read every one of them.
I voluntarily reviewed an advanced readers copy of this book.