Blurb: I am the monarch of Manhattan’s underworld. A corrupt king, ruling a sinful empire.
I wasn’t born to the crown. Nevertheless, I wear it well.
Aislinn Granville is the Crown Jewel of my empire—my queen. To my enemies, she’s my Achilles heel—a perfect pawn.
Without her, I am a wounded warrior. A ruthless, relentless beast.
There is nowhere she can be taken that I won’t find her. No adversary I won’t crush to get her back.
Even if I have to burn this city to the ground.

Excerpt: My heartbeat is an erratic, distracting pitter-patter against my ribs as I take in the stark beauty of the man standing in front of me. He looks like the same man I ran from. Almost.
The same rich black hair and inky eyelashes. The same strong, shadowed jawline and high, elegant cheekbones. The same spark of intensity lighting up those dark, dark eyes.
But now there are smudges beneath them. And faint horizontal lines, like the silvery remnants of a shattered spider web, crossing his forehead.
Damon is glaring at me like an adversary he’s torn between spanking or fucking. There is yearning in his gaze, a faint glimmer of tenderness beneath his infuriated expression.
I like it. A lot.
The panic and fear and pure terror that filled my veins just a few hours ago hasn’t yet evaporated. Those intense emotions are still there, like toxins that have yet to be flushed from my system. I don’t want to be treated with kid gloves. Not by Damon King.
I need his intensity now more than ever. I am desperate to revel in the raging storm Damon and I create when we’re together. The kind of storm that deserves a name. Deserves to be written in history books for its power . . . and for the toll of its destruction.
I want the shocking illumination of lightning. The ominous energy of thunder.
I want to give and take.
Clash and break.
Writhe and shake.
“Damon.” I say his name like a warning. I need the savage who claimed me as his own. My savage king.
He presses a firm kiss to my forehead, his fingers lightly pushing into the hair at the base of my scalp. “Tell me this,” he says. “Is there any hurt I can’t kiss better?”
The throaty rumble of Damon’s voice is like a liberal pour of molasses on my frayed nerves. “No.” My nose is flush with his chest and I breath deep that scent I didn’t think I would ever smell again. Wood and whiskey and raw masculinity. So damn intoxicating.
He sweeps his tongue along the rim of my ear. “Is there any hurt I can’t lick better?”
The tension in my shoulders eases as I flatten my palms against his chest. “No.”
Damon lifts my chin, our eyes locking on each other. “Is there any hurt I can’t fuck better?”
My cheeks warm as I draw my lower lip between my teeth. Then I shake my head slowly, “No.”
He smiles that darkly seductive grin and my stomach flips. “Let’s go take a shower.”
I nod my head eagerly. A long hot shower sounds perfect. A long hot shower—with my savage king—sounds downright exquisite. By the time the water is running, my borrowed bathrobe is just a white smudge of bad memory strewn across the tile floor.
Damon begins unbuttoning his shirt and I eagerly reach for his belt. When he is as naked as I am, he cups my chin between his thumb and forefingers and tips it upward. His kiss is hard but not punishing. The perfect amount of pressure.
I moan low in my throat.
He growls in return. And when we pull apart, we are wearing matching lust-drunk grins.
“Do you trust me?” he asks.
“I thought you said I shouldn’t trust anyone who has to ask.”
“I’m asking now.”
The truth falls from my lips. “With my life.” 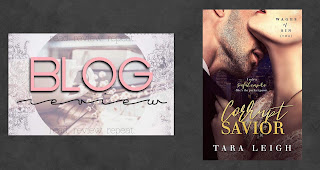 What an ending!  This was more than what I was expecting.But wow, I'm so glad I read this series.
Both Damon and Aislynn are fighting their own demons, but also others, and when their own emotions get in the way, it goes crazy.  Loved it!