Release Blitz with Review: Work in Progress by BJ Harvey 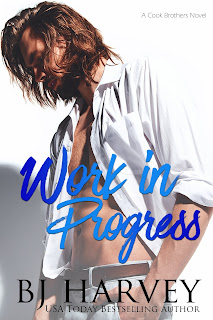 Flipping houses if not for the weak of heart. Neither is falling in love.
Jamie Cook is a work-in-progress. He’s always wanted what his parents have: a good marriage, lots of kids, and financial security. He thought he’d have the first two with his ex-girlfriend while the third would come once he got his house-flipping business off the ground. When his ex doesn’t subscribe to his five-year plan, he makes Cook Brothers Construction his sole focus. Then he moves next door to April Williams, a sassy single mom he can’t stop riling up. Throw in her matchmaking mother-in-law, who’s set her sights on Jamie being April’s knight in a leather tool belt, and a house threatening Jamie’s sanity, and it should be a recipe for disaster, but Jamie wants this three-month project to last forever. That’s if he can stop being the neighbor from hell and prove to April he’s not just flipping a house—he wants to flip her heart. 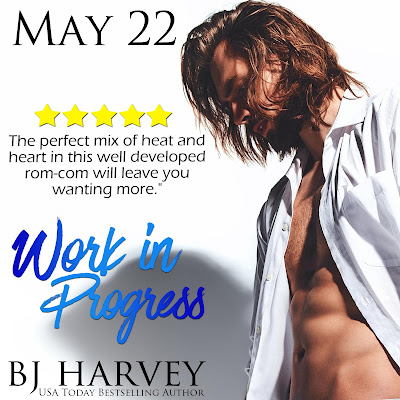 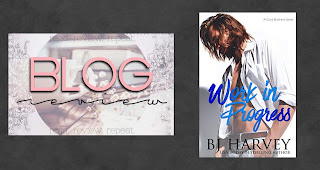 I have read this author before so when I read the blurb it sounded like a good reading experience and this story did not disappoint. I laughed way too much and to have a youngster schooling the adults was way to hilarious. There was a a love story mixed in, so no worries about that. Enjoyable, and I will gladly read the rest of the series.

“Jamie?”
“Yeah, buddy?”
“So, are you my new dad now?”
I open my mouth to say something, but nothing comes out.
Before I’m able to find the power of speech again, he continues, “But you’re my boss too?”
I decide to play along. “Your boss?”
He nods. “At the house. Building and stuff.”
“Well, not exact—”
“So that makes you my dad boss then?” He has the most serious look on his face, and I’m totally out of my depth here.
“Um…” I look to the door, willing April to walk through it and save me.
“Dad boss then,” he says again with a nod. “That’s good. Means I can get more money now.”
I cough, reaching over to the nightstand to take a long, much-needed drink from my coffee cup. I say the only thing that comes to mind. “Sure thing, buddy.”
“Awesome,” he says, a huge smile transforming his face. “Then I can buy flowers for Mom, so the next time you break our garden, I can fix it and make her smile like you did.”
“That’s a great idea. Now… have you seen my pants?”
“Are you not wearing pajamas?” Without warning, he lifts the sheet covering me from the waist down. “Oh, you’ve got big boy boxers like me. Mommy says I can only wear them when I wear shorts though. Are you sure you wore pants last night? Maybe you wore shorts because you’ve got your big boy boxers on.” And thank fuck I kept them on before falling to sleep last night.
“I was definitely wearing pants. Do you want to look in the bathroom for me?”
“It’s okay. I don’t need to. I saw Mommy carrying them into the kitchen.”
“Lovely?” I yell, hoping she can hear me. When a loud beat starts coming from downstairs, my bullshit sensor starts pinging. April is up to something, especially since it’s the exact same Queen song I was playing the night we first met. Two can play this game.
“Should we go get pancakes?” I ask.
“Yeah!” he says, jumping up and down before running out of the room.
I move to the bathroom and use the facilities. Searching for my clothes, I come up empty. Sure enough, my pants have indeed disappeared. With nothing else left to do about it, I walk out of the bedroom and down the stairs, wearing nothing but my boxer shorts.
I stop still the moment I enter the kitchen. Just as I’d imagined, April is sitting at the dining table, coffee in hand, her legs up, her ankles crossed on a chair with a wicked smirk on her face. Her only saving grace is the huge plate of pancakes piled high in the middle of the table.
“Hey Ax, how’s breakfast?” I ask.
“So good,” he groans, stuffing another forkful of pancake in his mouth.
“What are you doing after school today?”
His head snaps up. “Nuff-thing,” he says with a mouthful of food.
“Good. I was thinking you could bring your mom and gran over and we could give them a tour of the house now that it’s finished.”
“Oh wow. Yeah,” he says, puffing out his little chest. “I can show them where I worked.”
“Yep,” I reply with a grin. With his attention back on his rapidly emptying plate, I move in front of April. ”You look good in my tee. Did you also find my pants on your travels?”
Her lips twitch. ”I thought I’d do some laundry.” 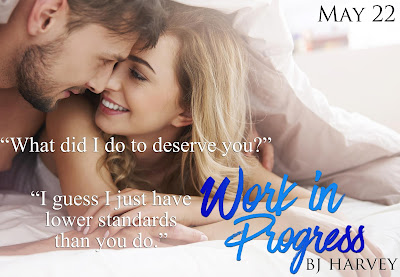 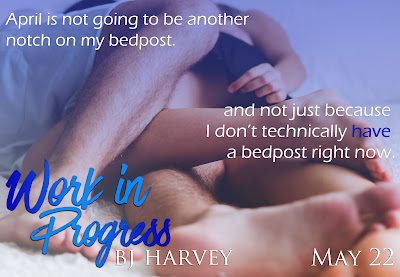 BJ Harvey is the USA Today Bestselling Author of the Bliss Series. She regards herself as a smut peddler, suspense conjurer, and a funny romance thinker upper. An avid music fan, you will always find her singing some hit song badly and loving every minute of it. She’s a wife, a mom to two beautiful girls, and hails from what she considers as the best country in the world—New Zealand—although she currently lives in Perth, Australia.