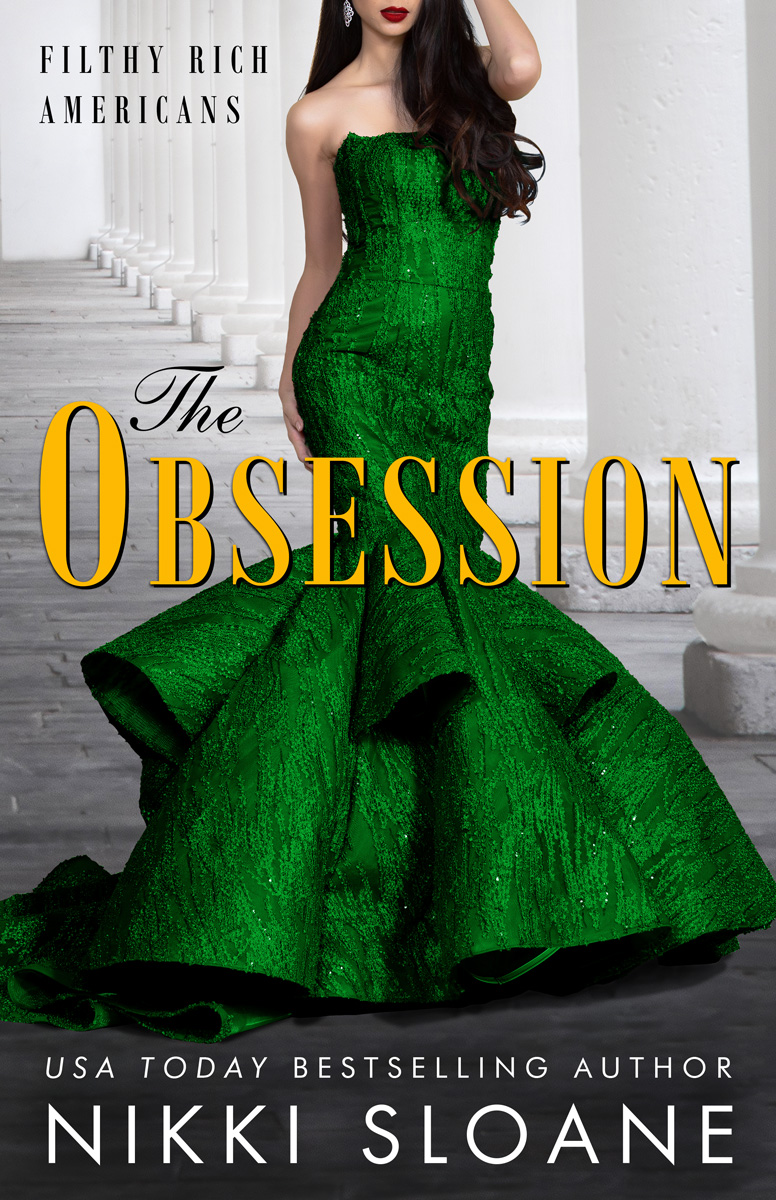 The Obsession, the next installment in the scorching hot Filthy Rich Americans trilogy by USA Today bestselling author Nikki Sloane.
The Hale family is obsessed with status, power, and control. No problem is too big their money can’t solve.
Royce Hale manipulated me into giving him everything. My virginity. My hand in marriage. My heart.
And as soon as he got what he wanted, he callously sold me off for a cool ten million.
In the boardroom and the twisted game his family plays, he says the only rule is to win at all costs.
Yesterday I learned a painful lesson not to trust the prince of Cape Hill. Today I’ll destroy his carefully laid plans and show him just how badly he’s already lost.
All the money in the world won’t be able to stop me. 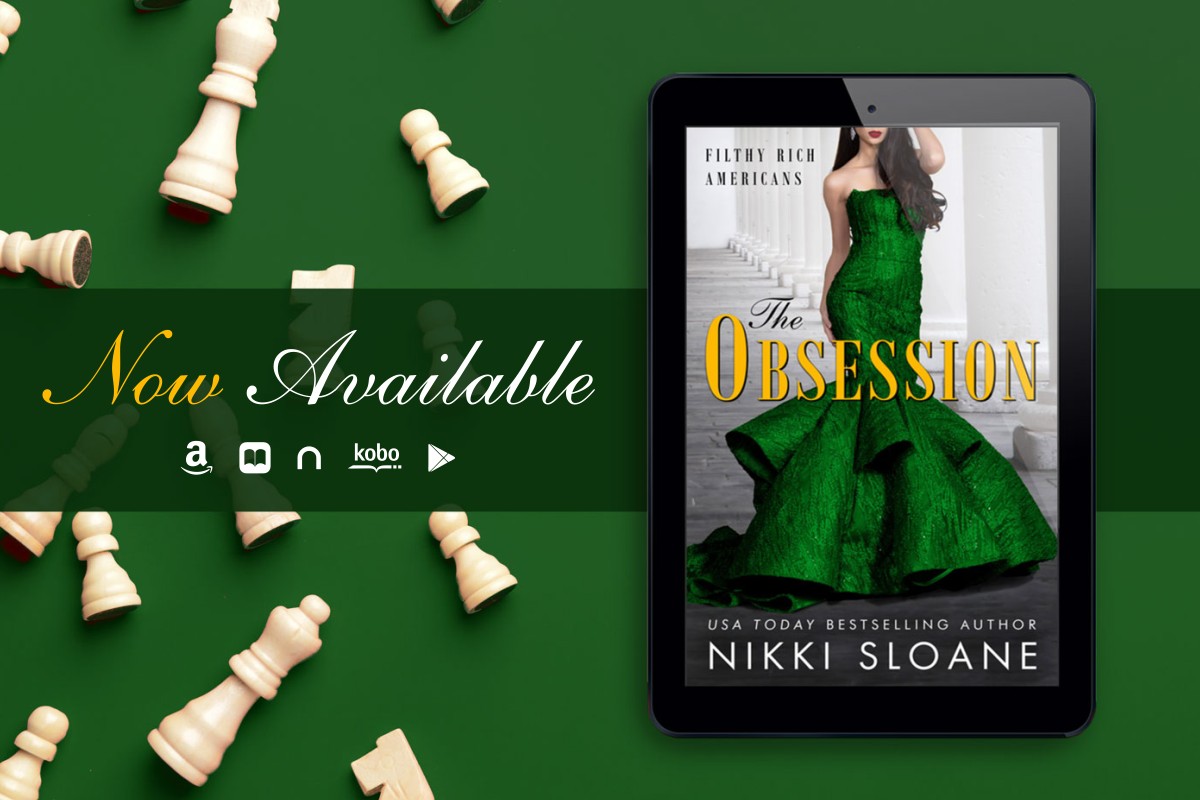 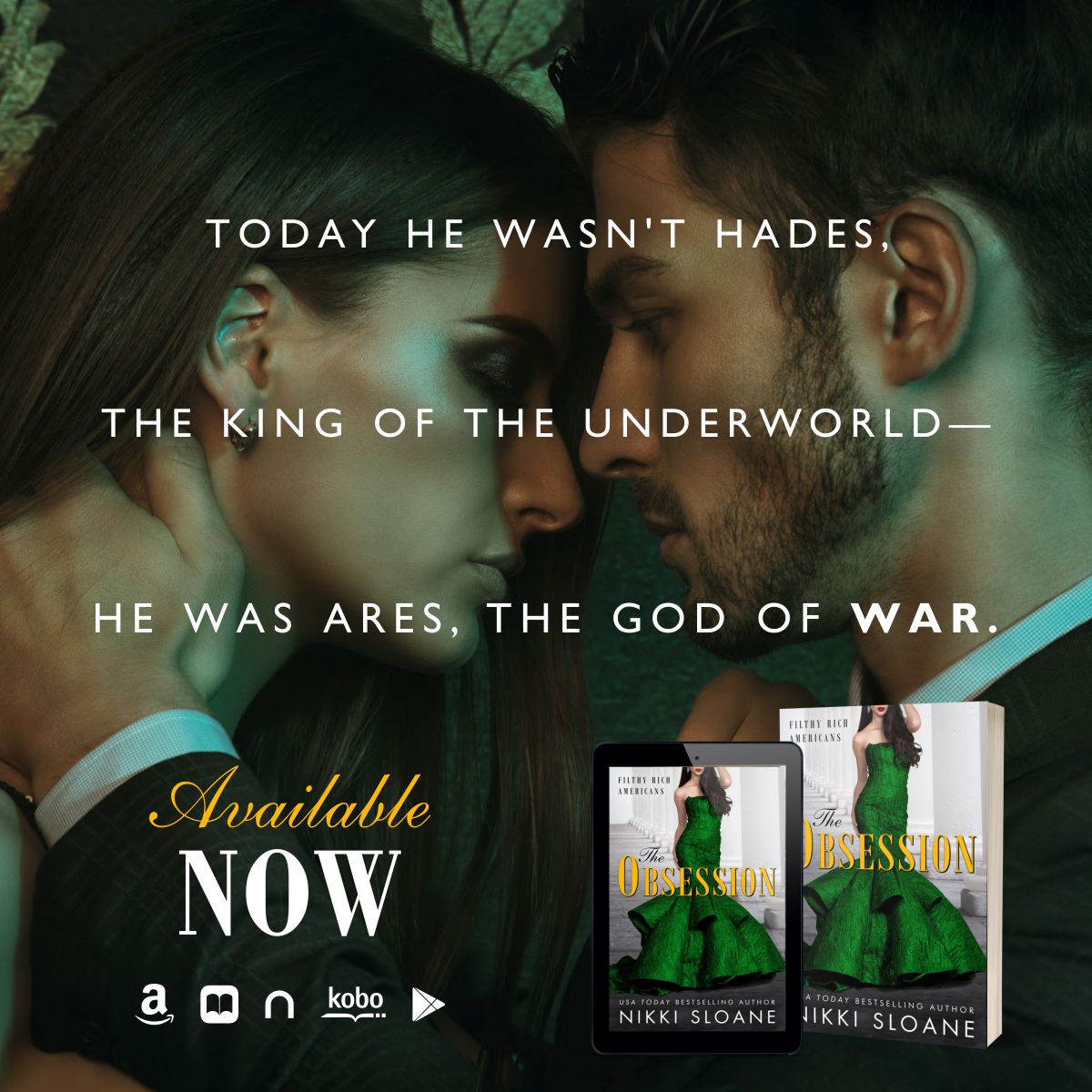 Excerpt:
Royce wasn’t amused. “What are you doing?” I’d run my palms up his spread thighs until I found what I wanted. He made a half-hearted attempt to push my hands away, but I was persistent, and he began to grow hard under my touch. He both did and didn’t want me to keep going. “I thought that wasn’t allowed.” I stroked the bulge thickening down one leg of his suit pants. “Technically, I only agreed not to while we’re at the house.” When I reached for his belt, his grip on my wrist was more serious. “My door’s not locked.” “But it’s closed.” There was office etiquette—a closed door was treated as a locked one. Plus, Royce was a Hale and sat on the board of directors. “Only someone with career suicide would walk in here.” I undid his belt buckle with one hand while cupping him with the other, and a nearly inaudible groan came from him. God, it was hot. He stared at me with his beautifully conflicted eyes, silently pleading for me to stop but also to hurry up already and get his zipper down. My unpracticed hands shook, but it was mostly with excitement. Outside the office window, sunlight bounced off the brownish-blue bay far below. He had Boston and his fiancée at his feet, and his fingers curled tight around his throne as I pulled him free from his pants. A big part of me was thrilled with this plan, no matter how risky it was. Macalister’s constant supervision and inappropriateness had left me feeling weak and powerless. I needed to take some control back. I’d push the rules just as I pushed Royce now. “There you go, Medusa,” he muttered. He tipped his head toward his lap and his rock-hard erection. “Turning me into stone again.” A half-laugh bubbled from my chest, but then I closed my hands around him and stroked downward. Last time I’d done this, he’d told me to do it like I meant it, and so I did now. I slid my firm grip up and down, wringing another moan from him. This was his purest self. The only time I knew beyond a shadow of a doubt he was being true. His body wouldn’t let him lie. He was breathing hard, and his maroon tie rode his heaving chest like it weighed fifty pounds. It was undeniable how we looked. The prince being serviced by one of his subjects. His heavy cock throbbed in my hands, and I relished the way it felt. So soft and yet hard. “Oh, fuck,” he said appreciatively, but then he glanced at his watch and torment twisted his face. “Fuck.” Rather than pick up the pace, I slowed my tempo. “You’re making me late.” An evil smile bloomed on my face. “Then go. I’m not making you stay.” “Oh, you aren’t, huh?” He gripped my hands and urged me to pump on him faster, both with his action and his furious eyes. “Harder,” he barked, “and faster. Finish what you started.” “I’ll do it how I want, thank you very much.”

About Nikki:
USA Today bestselling author Nikki Sloane landed in graphic design after her careers as a waitress, a screenwriter, and a ballroom dance instructor fell through. For eight years she worked for a design firm in that extremely tall, black, and tiered building in Chicago that went through an unfortunate name change during her time there.
Now she lives in Kentucky, is married and has two sons. She is a three-time Romance Writers of America RITA© Finalist, a Passionate Plume winner, a HOLT Medallion finalist, and couldn't be any happier that people enjoy reading her sexy words.
Connect with Nikki:
Amazon: http://amzn.to/1SbBUyM
Facebook: http://bit.ly/NikkiSloaneFB
Twitter: https://twitter.com/AuthorNSloane
Instagram: http://bit.ly/NikkiSloaneIG
Bookbub: http://bit.ly/NikkiSloanneBB
Goodreads: http://bit.ly/NikkiSloaneBB
Stay up to date with Nikki by joining her mailing list: https://www.nikkisloane.com/newsletter