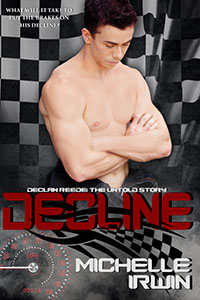 Hold on tight, stick to the racing line, and watch for the corners.
Four years after making the decision to leave his home town behind, all of Declan Reede's dreams have come true. Unapologetically foul-mouthed and well known for his off-track antics, his success seems unstoppable. At least until Queensland Raceway and a chance sighting of the girl who once held his heart. Now, getting around the track seems an impossible battle as he struggles to return to his previous form. With his career racing downhill faster than his V8 on Mount Panorama, there's more than just his reputation on the line.
What will it take to put the brakes on his decline?
**Due to strong language and sexual content not intended for anyone under age of 18** 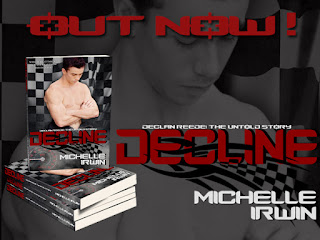 Add to your Goodreads want to read list here: 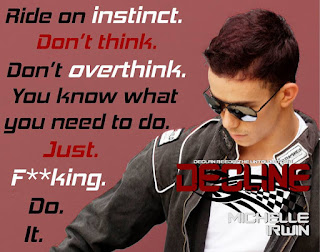 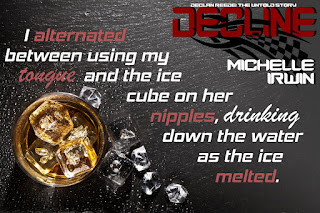 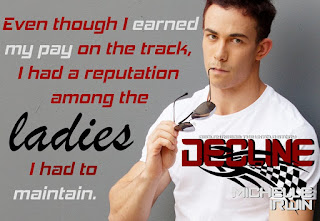 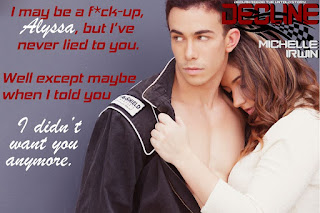 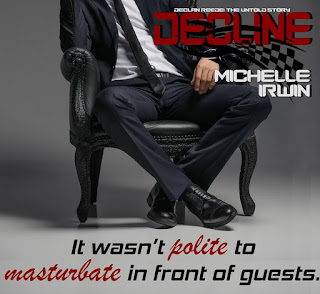 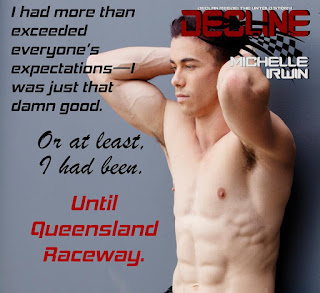 EXCERPT
Eden had been right about the track. By the ninth lap of my second stint, the bitumen was bone dry and the teams that had gambled on the rain staying were scrambling to the pits to change back onto slicks. I used the time to push even further ahead. Eden’s voice squawked over the radio, telling me that I had just achieved the fastest lap time of the day. If I didn’t have to keep both hands on the wheel, I would have given a fist pump in celebration. Things were finally going my way.
I was celebrating the small victories when I came across the top of the mountain again, across Skyline. The glare from the sun reflected in the top corner of my windscreen and I was blinded. Not by the light, but by the vision which the sun called to mind.
Alyssa.
My heart stopped and my eyes slammed closed.
Smiles and laughs; the sun glinting off her watch as we kept an eye on the time.
I could almost hear her voice bouncing around the car, laughing over some ridiculous shit we’d done during the day. We’d been so happy. So innocent. So fucking naive and stupid.
The memory was from one of the days we’d ditched school to hide out in our park. With a gasp, I swallowed oxygen down into protesting lungs. My hands shook and tremors raced through my fingers and into the wheel.
My stomach clenched as I remembered just how beautiful she’d been. She didn’t have supermodel looks, she had something better. An honest to goodness girl-next-door quality that shone through from within and made her ten times sexier than any over glossed supermodel could ever be. The truth was, as bad as the visions of Alyssa’s red-rimmed eyes were, the happy ones were worse. They became tangible reminders of how much she’d once meant to me, and I almost didn’t want to suppress them.
With two more gulping breaths, I forced my eyes open and pushed the thought away. My grip tightened on the steering wheel, but it was already too late.
Though it’d been mere seconds, I’d been in my own world—my past—for too long and hadn’t prepared to take the turn before falling into the Esses. I had no time to do anything but adjust the angle of my car as it smashed into the concrete barrier with a teeth-rattling bang. I prepared myself in the only way I could for a second crash as the car ricocheted off the wall, spun across the track, and then smashed into the side of a passing car. The sound of crunching metal and squealing rubber filled the space around me, but I could do nothing but hold on and hope for the best. My car lurched sickeningly toward the wall again, shunting hard into the concrete and rocking me into the hard surface of the door.
By the time I came to a rest, I was angled nose into the wall in a stationary car.
Unable to move, I panted as I struggled to comprehend just what had happened, aside from the fact that I’d crashed—that part I got loud and fucking clear. Closing my eyes, I mentally ran through my body to ensure I wasn’t too badly injured. I wiggled my fingers and my toes and was relieved when everything did what it was supposed to. Except for my heart racing at a million miles a minute, and the fact that I couldn’t breathe down nearly enough air to stay in control, I was okay.


My eyes snapped to the rear-view mirror when I heard the sound of protesting tyres. 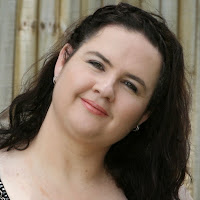 Michelle Irwin has been many things in her life: a hobbit taking a precious item to a fiery mountain; a young child stepping through the back of a wardrobe into another land; the last human stranded not-quite-alone in space three million years in the future; a young girl willing to fight for the love of a vampire; and a time-travelling madman in a box. She achieved all of these feats and many more through her voracious reading habit. Eventually, so much reading had to have an effect and the cast of characters inside her mind took over and spilled out onto the page.

Michelle lives in sunny Queensland in the land down under with her surprisingly patient husband and ever-intriguing daughter, carving out precious moments of writing and reading time around her accounts-based day job. A lover of love and overcoming the odds, she primarily writes paranormal and fantasy romance.

You can find Michelle here: