Dethroning the Alpha
Book 3 in the King of the Alphas Series
Author: Krystal White
Release Date: April 25, 2016
On Amazon

**THIS IS NOT A STANDALONE. THIS IS BOOK THREE IN THE SERIES AND THE FINAL INSTALLMENT IN THE KING OF ALPHAS TRILOGY.**

During this final installment of the King of Alphas trilogy, we learn what happens to Lexi as she leaves Lyconia with Tiberius. Will she ever get to see Raven again? Also, what happens during the war? Will Antonio with his army and creations defeat the rest of the Great Shifter Nations and succeed at imposing himself as the Supreme Alpha? Or will Raven and the rest of the Kings be able to stop him for good?

You’ll have to read the story to find out…

“So you want me to believe that this little girl is the Alpha Queen and that we are supposed to obey her?” Marcos says, and I’m glad the opportunity to unmask him came sooner rather than later. Within seconds, I take off my clothes and shift into my lioness. It’s been a thousand years since a lion shifter has roamed the Earth. To say these people are shocked is an understatement. Slowly I walk around the room, stopping in front of Marcos before I roar. Along with his imminent fear, Marcos gifts me an insight into his mind. I roar a second time, and his fear seems to allow me the opportunity to infiltrate deeper inside his mind, reaching his darkest thoughts and desires. Once I find what I need, I roam around the room and look into everyone else’s thoughts to ensure Marcos is the only one who needs to leave before the real meeting begins. I head back to Tiberius, and once I shift, he shields me with his body while I dress. I hold back a smile as I’m sure all of these shifters are used to being seen naked.

“I think at this time there’s no doubt as to who I am,” I say and everyone nods. “Although I must confess, I do have other talents. One of them is being able to look into people’s minds.” Right away they all express their sentiments about it, and Tiberius calls for them to be silent.

“Victor, when you were five years old you found a baby alligator. Per your father’s instructions you were supposed to eat it. Instead, you kept him as a pet until you couldn’t hide him from your father anymore.” “No doubt about it. The Alpha Queen is telling the truth as no one knew about my baby alligator.” Victor says and offers me a small smile. “Lucky guess.” Marcos says, and I walk towards him now.

“What are those numbers supposed to mean?” Darius asks. “They are nothing!” Marcos yells, and I interject. “That’s the combination for Marcos most secret safe. You will find it beneath his walk-in closet’s floor. Raise the rug and you’ll find the combination pad.” “And why is that relevant?” Julius asks, and I continue to gaze into Marcos' eyes. “Are you going to come clean or do you want me to tell them?” Within seconds, Marcos comes at me with murderous intent, but Tiberius is much faster. The Tiger Alpha holds Marcos by the throat and walks him back, pinning him to the wall with so much force the wall shook and I’m sure at least one of Marcos’ ribs is cracked.

“That was the last straw, Marcos. I’ve known about your duplicity for a while now but had no way of proving it. With the content of that safe, I’ll be able to kill you. Now, do you want to shame the Hildred name further and have me strip your family from everything they have? Or are you going to man up and confess to what you’ve done?” Moments later, Tiberius gives the order for his men to go and search Marcos’ place before we all focus on Marcos once again. Tiberius hasn’t released his hold of Marcos’ neck, and he squeezes it a bit more. “Well?” Marcos nods and Tiberius relaxes his grip a bit, allowing the man room to breathe and speak.

“I have been working with Antonio for the past five years. He promised that once you were killed, I’d be in charge of Afrikanis.” Instantly, everyone in the room starts shouting in disbelief. “Even if Tiberius dies, you can’t be our ruler,” Isabella adds and Marcos grins. “Isabella, under Antonio’s reign, every GSN will be his. He will become Supreme Alpha and will appoint men he can trust as governors of each nation.” Soon, Tiberius guards walk back inside the room with everything that was inside Marcos secret safe, and it all confirms that Marcos has been working for Antonio. “Is there any doubt to Marcos duplicity?” Tiberius asks, and he looks around the room. Each of the advisors responds with a no. “There is no time for a trial as I must go and join the war. Therefore, I invoke my right as the Alpha, and I will kill him now. Any last words Marcos?”

“You will die soon, Tiberius. Antonio will see to it. My only regret is not being there when you die.” With that, Tiberius crushes the traitors’ neck and Marcos limp body falls to the floor. 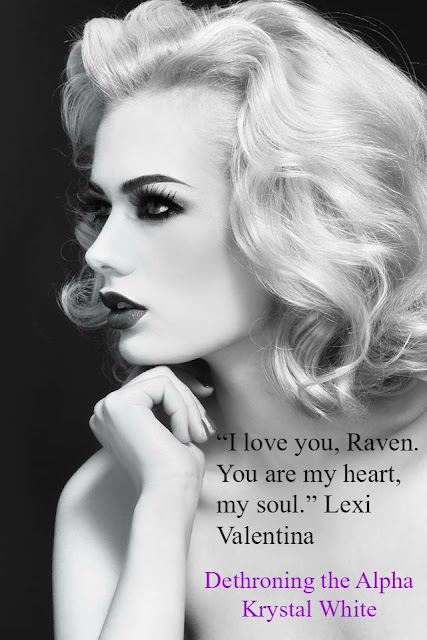 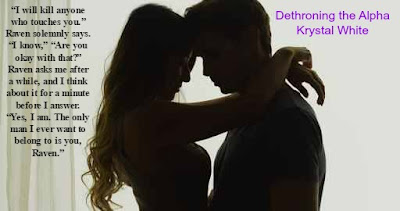 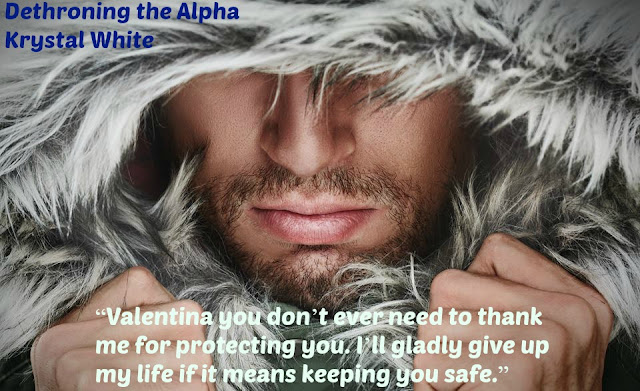 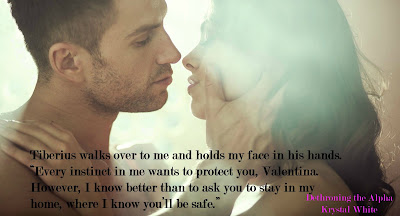 Hello, My name is Krystal, and I love writing!

I have always thought of myself as quite inventive, and I figured it was time to put my creativity and imagination to the test. That's when I decided to buy a smaller laptop that I could easily carry with me and furiously write whenever possible!

With my tools in hand, I began writing and publishing my novellas on January 2015. I love writing, and I hope you enjoy reading my stories almost as much as I enjoyed writing them! One thing you need to know about my writing? I describe my books as you being on a rollercoaster ride. At times, you will want to laugh, cry, curse (at a character or me) or celebrate.

Also, if the book is part of a series, there will always be questions left unanswered, which I will address later on in following books. If you don't know where to start, I'd suggest you pick up Unforeseen, Fortuitous and Alpha Queen, which are all free!

Like pimping? plus the chance at getting ARCs and GCs? Then join my street team!
White's Wenches Street Team:
https://www.facebook.com/groups/872335936147270/