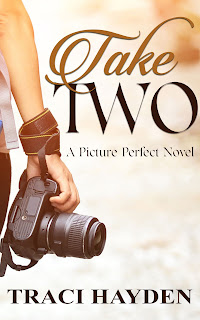 Beth Huntley, photographer and devoted bachelorette, doesn’t believe in true love. Too much hurt and disappointment has left her hiding behind the camera. All she can see is a black and white world through the lens.

William Lorde, widower and father, was once an open and carefree man. The loss of his wife has left him wrapped up in the needs of his little girl. He can no longer see the colors of the world as he struggles each and every day. What happens when these two similarly different people meet and help each other to step out of the world they’ve created for themselves? Will they find a love that helps them heal from the past, enjoy their present and create a beautiful future?

Beth was tucked in to my side, my arm draped over her shoulders, and I rubbed her arm supportively. My other hand was covering one of her hands, keeping it from digging at her wrist.

Speechless, I listened for a second time to Beth's tale about a package she had been hiding. Her father and Jackie seemed to be just as shocked as I’d been. I wasn't sure how this conversation between her and Ryan was going to play out.

"All right, explain this again." Ryan asked sharply. “And they better be short sentences. Do you understand me?”

“Yes.” Beth's voice was shaky and understandably so. “Sunday I found an envelope on the steps of the house.”

“And you brought it in the house.” Ryan's voice went up an octave. “I've got that part. What I want clarification on, child, is... what was in it.”

Beth pushed her body tighter into mine. I continued to support her as much as possible.

This attitude Ryan was taking reminded me of a cop rather than a father. I wasn't fond of it and was about to say so when Beth accidentally cut me off.

“Dad, stop.” She fell out of my arms faster than I thought physically possible. “I know I screwed up. But right now I need my father not a dictator.”

Ryan's face blanched as his eyes bulged. He took a deep breath as he flexed his fists. After a momentary stare down with his daughter, his body sagged. “Beth, I'm sorry, but you've put so many people in danger here.”

“You don't think I know that. I messed up, okay? But I can't change the mistake. I can only try to correct it.” She admitted as she walked over and fell into him.

I could see a future me as he wrapped her up protectively in his arms. “Beth, explain the pictures again.”

“There were three. One was me and Jude. One had William, Angel and I at the park. And the other...” She paused. She had been terrified of the meaning of the last one when she told me the story. “I was by myself.”

“Where is the envelope now?” Ryan asked quietly. It was obvious he had the same realization that Beth and I had.

"In my room at home," Beth answered.

Ryan reached for his phone, tapped on the screen before putting it to his ear. "Answer the phone, boy," Ryan said, muttering to himself. "Wyatt? Call me when you get this message."

I could see her body tense and I worried that she was in the starting stages of another attack. I wanted to do something, say something that could give Beth a few moments to compose herself.

"Ryan, dear, can we just drop this subject for now? Nothing can be done till Wyatt calls, and I'm sure Beth's been dealing with all of this for long enough." Jackie was quick to assess the situation too.

"Thank you, Jackie, but I think William and I still have some talking to do," Beth objected.

She reached out her hand, silently asking me to come with her. I followed her out to the backyard. Beth stopped and turned, throwing her body against mine. She squeezed her arms tightly around my waist. "I'm so sorry."

I cocooned her within my arms. "Sorry for what?"

"For pulling you and Angel into this." Beth's voice was muffled against my chest. "I'll understand if you want to walk away now. It'll be safer for you if you did."

"What, wait... what?" I didn't even know where to start with this conversation. I pushed Beth away from me so I could look down into her eyes. "Are you serious? Why the hell would I walk away now, after I’ve fought for so long to get you to open up and trust me?"

"I just thought..." Beth was lost and confused.

"I love you, Beth. I won't walk away when you need me most," I stated firmly, cupping my hand on her cheek.

I realized what I’d said. The words had been spoken, the feelings exposed. I knew how she felt, she had said it, and we knew how much we both meant to each other.

"Wasn't exactly how I wanted to tell you, but, yes. I love you, Elizabeth Diane Huntley. I would move heaven and earth to make sure you and Angel were safe, secure and protected from all the evils in this world," I declared. "You are now, and always will be, my life. Wherever this world takes you, Angel and I will follow."

Beth fell against me, hanging onto me as if I was the only tangible thing on Earth which existed for her. Her final wall fell as she gave in to the knowledge that she could find happiness in love.

✯ This book is specially discounted till release tour is over. Get your copy today. ✯

My love for books began at a very small age. I lived inside the many worlds the local library could provide. The characters within those pages were my companions and my support when I needed someone most.

My imagination began to soar as I grew. I began writing small poems as a teenager, but never thought much about publishing or expanding beyond put my words to paper.

After my children were born our love for a certain TV show fueled my love for writing. Using my children as inspiration, I began to write fanfiction, my children being the characters within the stories.

My passion for putting words to paper (or screen as is the norm now) has turned from passion to obsession. I've made some incredible friends through this journey and in turn, have become not only an author but a promoter and supporter for those whose imagination dreams character and worlds that I can lose myself in.

I thank my precious children, my beautiful soul-mate and my forever sister and best friend for being my constant rock and support as I continue to walk this road called life.