WILLEM
The Witches of Wimberley Book 1 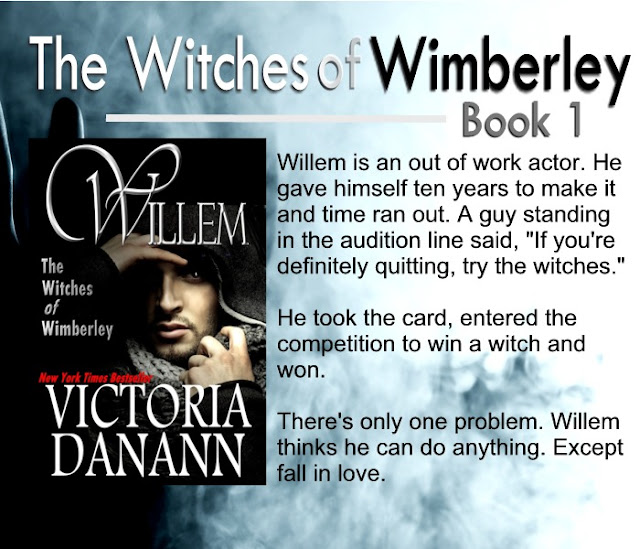 He squinted his eyes and gave me a little smile like he questioned my sanity.

“You do know we’re talking about witches, right?”

“I know there are a lot of people who call themselves witches, but what it means is they like burning candles, dancing naked sometimes, I guess. Are you saying you think there are women here who really are touched by the supernatural?”

He laughed. “Man. I don’t know how you’re sitting on that stool next to me. How did you manage to get this far without knowing anything about what you’re doing here?” He shook his head. “Yes. I do mean there are women here who really are touched by the supernatural.”

I had to admit that I felt a thrill start in my nipples and run all the way through my body producing goosebumps, a cock twitch, and a half hard. What if it was true? I’d spent my whole life secretly hoping that I’d be lucky enough to have an actual encounter with the other side of reality, while not really believing that such a thing might be possible.

That’s when I realized that I’d been on the wrong path. For the first time I recognized and confronted the fact that I didn’t really want to be an actor. I hadn’t wanted to be a college student taking a foreign language I’d never use or studying geology, which I would never use. But I hadn’t really wanted to be an actor either. It was just Plan B more or less suggested by other people. My heart wasn’t in it at all.

Acting as my heart’s desire? Don’t make me laugh. Actually there’s not much laughable about wasting ten years pursuing something I didn’t even want.

That revelation made me feel like the dumbest guy sitting on a counter stool anywhere. Why hadn’t I clued in before? And what if I couldn’t get jobs acting because I wasn’t supposed to be acting.
That follow up revelation almost blew me right off the stool.

“If that’s true, it would be beyond incredible.”

It hadn’t occurred to me to be scared before and maybe that just meant I was revealing an expanded capacity for stupidity.

I wasn’t interested in contemplating a lifetime contract of marriage, but I could do a year with anybody if it meant doing actual hands-on research. Maybe I should change that to on site research.

He lifted a well-toned shoulder. “Who knows? I can’t say I’ve seen anything like that, but ley lines do intersect at the crossroads.”

I jerked my gaze back to his. “Ley lines? You know about ley lines?”

Deciding to let that go, I said, “So we’re going to meet the witches at the barbeque tonight?”

He shook his head while still taking a pull on his IBC. When he swallowed he said, “I think it’s just contestants and former winners. Our chance to talk to them about life in Wimberley or whatever. They’ll be at the big event tomorrow night though. The Witches’ Ball.”

USA TODAY Bestselling Author, Victoria Danann, is making her debut into Contemporary Romance with releases in May and June 2015, after taking the world of PNR by storm.

Victoria's paranormal romances come with uniquely fresh perspectives on "imaginary" creatures, characters, and themes. She adds a dash of scifi, a flourish of fantasy, enough humor to make you laugh out loud, and enough steam to make you squirm in your chair. Her heroines are independent femmes with flaws and minds of their own whether they are aliens, witches, demonologists, psychics, past life therapists, or financial analysts from Dallas. Her heroes are hot and hunky, but they also have brains, character, and good manners - usually - whether they be elves, demons, berserkers, werewolves, or vampires.

The first book of the Knights of Black Swan Paranormal Romance Series, My Familiar Stranger, was nominated for Best Paranormal Romance of 2012 by both Reviewers' Choice and Readers' Choice Awards. All of her books have opened on the Amazon Best Sellers list and earned Night Owl Reviews TOP PICK awards. Many have appeared on Listopia BOOK OF THE MONTH as #1 across all genres.

If you're interested in Victoria personally, she is also a classically trained musician who defected to Classic Rock music. Until 2013 she was the utility player for Houston's Roadhouse band, which means she played rhythm guitar, keyboards, sang back ups and female leads. Her band covered everything (note for note) from Styx to Led Zepellin to Rush.

She lives in The Woodlands, Texas with her husband and a very smart, mostly black German Shepherd dog.