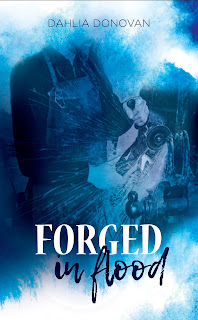 From best-selling author Dahlia Donovan comes a new witty novella between three very different men. With drama, emotional turmoil, and hilarious banter, be prepared to be swept away in Dahlia’s British M/M/M romance.

When one drunken night forever scars three best friends, will they ever find a way to pick up the pieces?

Eaten up with guilt, Ivan Black spends ten years hiding from the world. He retreats to his family forge to wallow in misery. Alone. So lonely his heart aches with it.

Wesley Cook and Rolland Spence have been together since university. They struggle through the physical scars of the accident, building a life in the ruins of their dreams. They find happiness but continue to miss their angry ginger Viking—Ivan.

In all the anger of wasted years, the three men find a way to forge a relationship as hot as the fires in the smithy.

Forged in Flood is a British contemporary M/M/M romance. With heartache, hot men with foul mouths, and plenty of heat, enjoy getting to know Ivan, Wesley, and Roland. 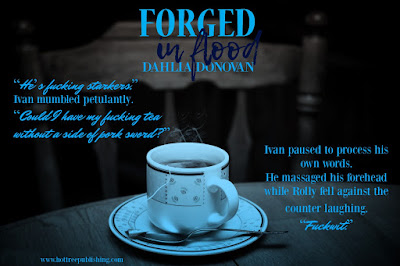 “Rolly. How many times do I have to remind you why we came before it sinks through your hard skull? We want to reconnect with him, so stop calling him an arse.” Wes pinched the bridge of his nose and sighed several times before speaking. “Repeat after me. Reconciliation.”
“Words over three syllables require a kiss before I listen.” Rolly shook his head wildly to send a spray of water flying from his mop of dark hair. “You can start below the belt and work your way up if you like. Give your tongue a good workout to keep you from nagging me so fecking much.”
“Maybe later.”
Rolly gave his long-time lover a broad, crooked grin; his black eyes met Wes’s bright hazel ones. “Just a maybe?”
His heart and dick as always gave an interested kick as he looked up into Wes’s twinkling gaze. Returning his attention to the door, Rolly banged his fist against it for a second time. He didn’t need to be distracted.
They’d always been opposites.
Wes had tawny-coloured skin, marked with scars from the accident, and black hair, what little of it showed since he shaved it so closely. His eyes were the brightest hazel, almost jewel toned. He was steady and strong in both body and mind, and smart, too smart to be a simple rugby pundit.
Unlike Rolly, Wes had always towered over everyone yet managed to almost instinctually evoke a sense of calm in others. His calm and mild temperament helped matters quite a bit. He’d never gotten himself into trouble either on the pitch or off it.
On the other hand, Rolly always felt dull by comparison when he peered into the mirror. His hair and eyes were the colour of mud that contrasted against the pasty white skin he’d inherited from his mother. Short, stocky, and built to run a ball down the pitch—or he had been until the car wreck left him with a permanent limp.
The door opened with a sharp thud when it bounced against the wall behind it. Rolly broke out of his thoughts to find himself face-to-face with a wild-eyed, bare-chested Ivan. He hadn’t changed much in their almost ten years apart—still tall and solid, looking like an angry ginger Viking with stark blue eyes and a strong-set jaw.
“Well? In with you both. I’m not chatting out in the rain.” Ivan spun around and disappeared into the forge, calling to them over his shoulder. “Tea’s on. You’ll want some to help you warm up. Fire’s on as well, so go stand by it.”

“Check out his new ink.” Wes drew Rolly’s attention to the massive artwork covering Ivan’s back. The tattoo was a huge set of demonic-looking angel wings—dark and shadowy. “We should’ve come to visit sooner.”

Website | Facebook | Twitter | Goodreads | Amazon
Dahlia Donovan wrote her first romance series after a crazy dream about shifters and damsels in distress. She prefers irreverent humour and unconventional characters. An autistic and occasional hermit, her life wouldn’t be complete without her husband and her massive collection of books and video games.