She's his best friend's little sister. He's known her all his life. He's practically part of the family. There is nothing either of them could do to surprise the other at this point.
Then she showed up in his bedroom in lingerie and asked him to take her V-card.
Now, that was a surprise.
Aiden is pretty sure Zoe was equally surprised when he told her no.
To say that he didn't handle it well would be a massive understatement. Almost as massive as the amount of work he's going to have to do now to convince her that he wants her. Forever.
Right after he tells her that he's bought the company that's her bakery’s biggest competitor.
Maybe if he tells her he’s in love with her first, that will help sugarcoat the whole we're-rivals-in-business-now thing.
So, first "I'm in love with you", then "take off your clothes", then "I'm now your business adversary".
Piece of cake. 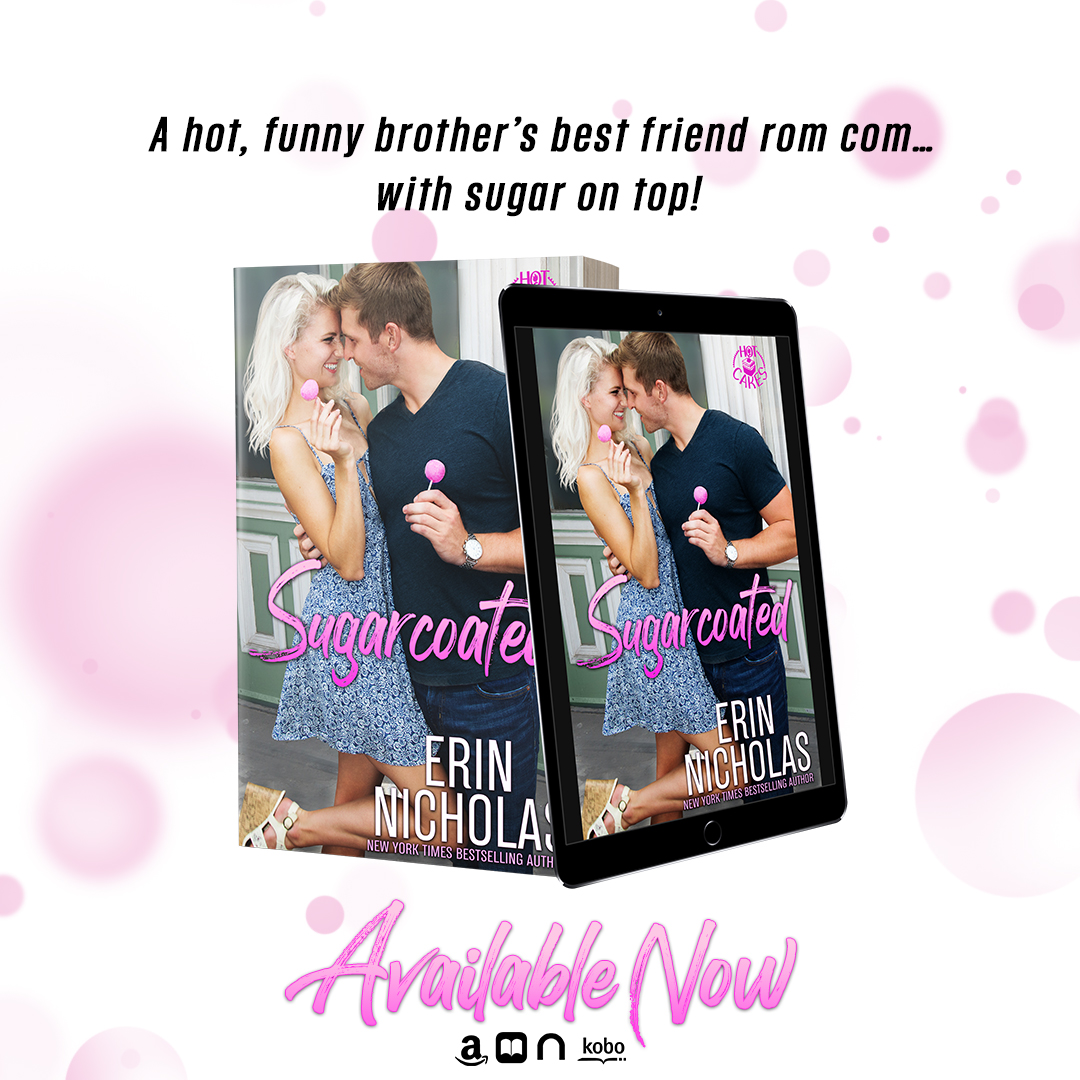 Download your copy today! Amazon: https://amzn.to/3bjel3L Amazon Worldwide: http://mybook.to/sugarcoated Apple Books: https://apple.co/36BvxzB Nook: http://bit.ly/39UU6t5 Kobo: http://bit.ly/37Lz6Dk Google Play: https://bit.ly/2Wxondp Amazon Paperback: https://amzn.to/2UvGsWr Add to Goodreads: http://bit.ly/36Etef8
Excerpt:
“What?” she asked, her eyes wide and blinking. “You thought I’d just be waiting around for you to come back?”
“Yes!” It was the wrong answer, he knew, even as he said it. But it was true.
“You are so full of yourself!” She frowned. “You actually thought I’d be waiting around, pining for you, didn’t you?”
Maybe not crying herself to sleep every night, but thinking about him? Yeah. Fuck. He hadn’t been able to get her out of his mind for more than a few hours at a time. “It’s only been five months,” he said. “Is it really crazy for me to think that you didn’t get your virginity ‘taken care of’ yet?”
“Exactly! It’s been five months!” she said.
“You went twenty-five years without sex, and you couldn’t go five more months?”
“Well, it’s not like you gave me an IOU!” she shot back. “I had no idea when you were coming back, and I assumed your answer would have still been no. So yeah, I moved on, Aiden.”
“Who was it?” he asked, noting his tone was suddenly a little ominous.
“I’m not telling you that.” She looked at him like he was insane.
“Tell me, Zoe.”
“No.”
“I’ll find out. This is Appleby. I’ll probably know by the end of tonight.”
“You won’t.” She lifted her chin. “I can promise you that.”
“Bet I do.”
“Why do you really even care? Now you don’t have to do it.”
“Because you’re mine.”
Yeah, shit. See, he’d known that was the wrong answer to give. Guys didn’t go around claiming women like they were property or possessions. He knew that. He’d never had that urge before. This woman was strong and independent and confident and certainly didn’t need him for anything.
But the idea of another man touching her, seeing her naked, making her feel the ultimate pleasure, made his blood boil.
She stood, just staring at him. Then she picked up a cake ball. And threw it at him. It hit him square in the red tie and bounced back onto the table.
“You’re a jerk.”
Yeah, maybe he was. A nice guy would probably just take all her explanations and excuses about why they shouldn’t be together and admit his idea was crazy.
He didn’t say anything. He didn’t wipe away the sticky crumbs the cake ball left on his tie. He picked up the ball and rounded the worktable.
Her eyes widened, and she backed up as he came closer. He kept going. Until her back was against the front of the fridge.
He didn’t say a word as he stopped right in front of her, lifted his hand to cup her face, and leaned in.
Aiden ignored her hands on his chest. She wasn’t pushing. She wasn’t pulling him closer either, but she wasn’t trying to get away. She wasn’t lifting her knee to his balls. She wasn’t saying no.
He stared into her eyes for a long moment. She could stop this. He knew she knew that.
She didn’t.
So he kissed her.
About Erin Nicholas