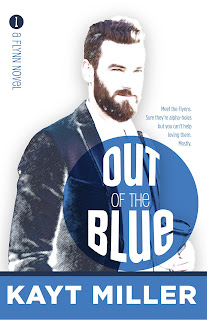 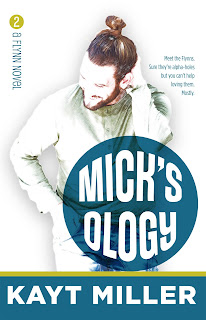 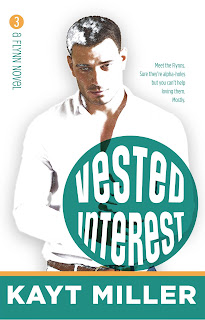 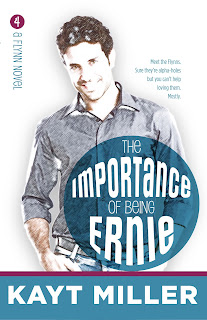 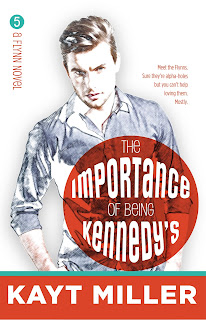 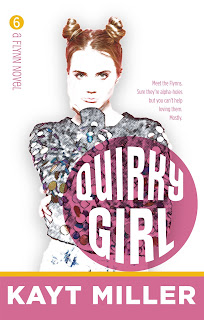 Sophie
Sophie Kincaid knows how to find her brides the perfect dress for their dream wedding. A little overweight and a lot under tall, Sophie faces age thirty knowing she'll never have her own happily-ever-after and she'll soon need a cat or two to complete her self-fulfilling prophecy. However, when a ruggedly handsome customer enters the shop in need of a tuxedo, Sophie finds herself dreaming of the tall, broad, and hot-as-sin Henry Flynn. The only problem is guys like Henry don't look twice at women like Sophie. It's just a fact of life.
Hank
Henry "Hank" Flynn is a foul-mouthed detective with the Chicago P. D. who knows all there is to know about solving crimes. He's big, strong, and stubborn as hell. At thirty-five, he has no interest in finding a woman unless it's for one night in his bed. Been there. Done that. Divorced years ago from a spiteful gold-digger, Hank doesn't need or want to know anything about his hookups. That is until he walks into a shop to get a tux for his brother's wedding and is drawn to a little beauty named Sophie. When Sophie's tenant is found murdered, Henry finds himself on the case with a need to solve one murder and prevent another. Keeping Sophie safe and in his arms is his number one priority even when she doesn't think she needs saving.
While Sophie doesn't believe a man like Henry Flynn would want her; Henry believes fate has brought them together. Fingers crossed fate wins because who doesn't love a happy ending? 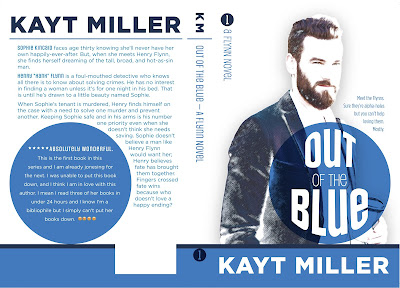 Michael "Mick" Flynn is a crotchety old man, and he's only twenty-seven. Left bitter and broken after his last relationship, he's vowed to remain relationship-free for the rest of his life. Besides, who needs a serious relationship when there are so many willing party girls around to take to his bed? As a mixologist (a.k.a. a bartender) at one of Chicago's hippest clubs; he's got his pick of the ladies. So when Veronica "Roni" McGonigall plops down at his bar and orders a classic drink, he's taken by her smile, her candor, and her ability to make him laugh harder than he has in over a year.
Deciding to drink her sorrows away after realizing the guy she's crushing on at work won’t give her a second glance, Mick Flynn is the last person she expects to draw into her pathetic life. Mick is hot as sin and absolutely unattainable to a voluptuous girl like Roni. But when Roni pulls Mick into a sexy kiss (thanks to a little too much liquid courage), it leaves them both wondering… can we be more than friends? 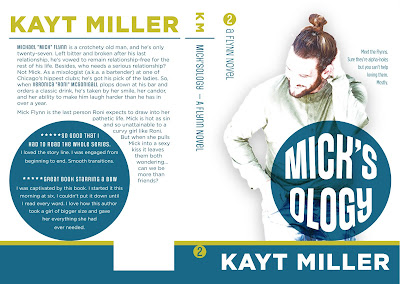 David Flynn has it all. Fresh out of a marriage that was marred by infidelity (hers) and misery (his). Now he’s got life by the cojones. He’s got a job he loves and with the help of his assistant, has moved up every rung of the ladder all the way up to V.P. in a prestigious investment management firm. It’s too bad David can’t see past his own ambitions to the woman who has got him to this point; the same woman he’s about to let go.
Cassandra Darrow has it all. A job she likes and a boss she loves, I mean loves to work with. Cassie and David are a well-oiled machine––a team. At least that’s what she thinks. That is until he lets her go easily––too easily. Surely it’s not because of their little tryst in the alley outside his favorite pub. David Flynn is better than that. Right? 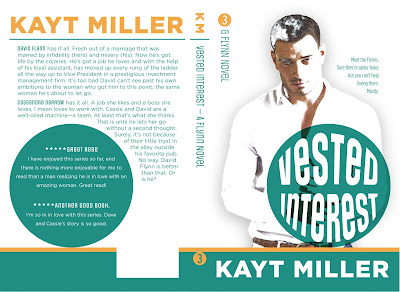 Claire:
I never used to think that there was such a thing as a stupid genius, but that opinion changed when I met Ernie Flynn. Ernie is smart to the Nth degree about nerdy stuff, but when it comes to women, he’s clueless. My name is Mary Claire Hammer, and I'm in love with that nerd. The trouble is, I'm also his best friend and roommate. So, while this book is named after him, it’s really about me. It’s also about Ernie finding his way in the world when things sort of fall apart around him and it’s about me figuring out whether or not Ernie is the One and more importantly if he’s the Right one. So, no matter what you read in this story about Ernie and me... one thing you can be sure of is; I will always love Ernie Flynn but it may turn out I'm not IN love with him. And that's okay because I believe whole-heartedly, if it's meant to be,it will be. 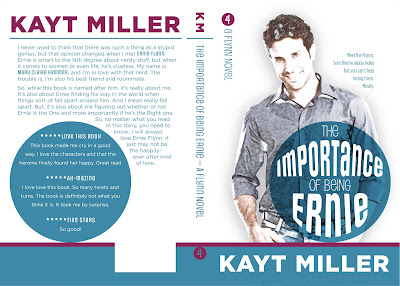 Dear Chick Who’s Reading This Sh*t,
(Or dude. No judgment here.) I’m irritated. The book before this one was supposed to be all about me. Hell, it was named after me, but my asshat baby brother ended up stealing the show. So, this little book is all about me––about me getting my shit together, about me figuring out that Kennedy Corcoran’s my person, and about me working my ass off to convince that same Kennedy Corcoran that I’m her person too. It hasn’t been easy because my woman is stubborn. And bossy. Oh, and dominant. Surprisingly, I’ve discovered the dominant side of my woman is hot as hell. More about that later. So, sit tight and enjoy the ride and don’t expect to hear word one about my little brother. Well, not much anyway. I’m sure he’ll get his nose in my business because he’s a dick like that. I’m out. Ernest Flynn 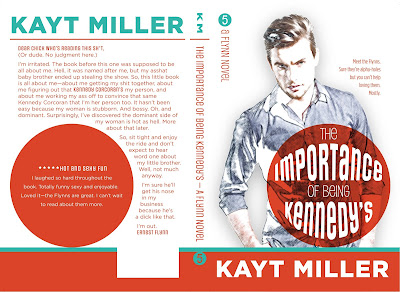 Beatrice Yousef is different. Maybe different isn't the right word. Quirky. Yeah, she's quirky. With her part-time jobs and hobbies, like her love of dolphins and her cat Mr. Barnabus Nibblesworth, she barely has time to think of the male species.
Ed Flynn is a stick in the mud. Or maybe he's just got a stick up his a**. Either way, the guy wouldn’t know fun if it slapped him on the face because he's too busy being the responsible one, a big brother and his father's right-hand man. The thought of adding a woman to his plate, well, that’s not in the cards for Ed. At first, all Ed can see in Bea is a clumsy, awkward girl whose uniform is ill-fitting and whose hair is a rat’s nest. But, when she ends up in his arms, he feels something. And no, it's not the glass of red wine she just spilled on his shirt. It's something way better. It's too bad Ed can't seem to picture himself ever being happy let alone getting his own happily ever after. 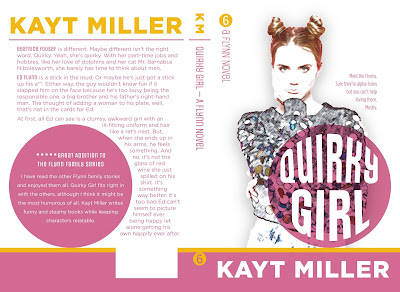 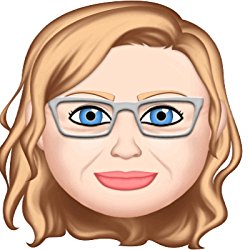 I grew up in the midwest with a loving family including three brothers, one sister, and my parents who always fostered my creative side. I earned my bachelor's degree at Iowa State University, then I was off to the Savannah College of Art and Design for graduate school. After that, I returned to Iowa for work which led me, once again, to ISU for my master's degree in education.
I love to read and one day I was searching for a book. A book about a certain type of woman and a specific kind of man and I couldn't find it so, I wrote it. I called it Game Changer and it couldn't have been a more appropriate title. It changed my life in many ways. While my real job is teaching young people, my fun job is conjuring up characters and situations to write about.
My goal, as a writer, is to write stories that relate to all of us, to make readers laugh and maybe cry sometimes. I hope my readers can escape into a fantasy, one that's actually possible. Sure, some of the stories could be dubbed "Insta-love" stories but that's okay. I fell in love with my husband pretty damn fast and with my daughter the second I saw her. So, it's a thing, I swear.