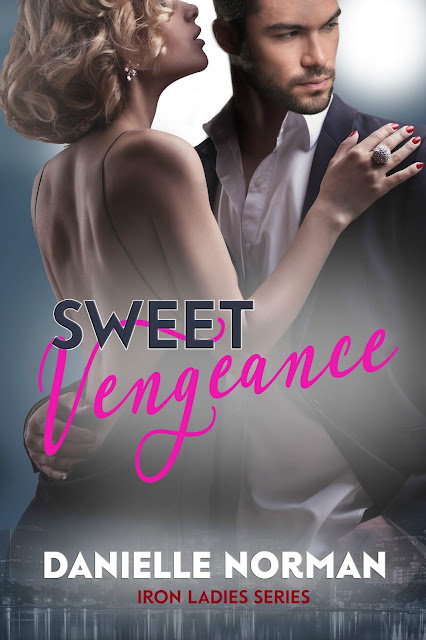 
The handoff of an orchid colored card was all it took to call the Iron Ladies, a whisper network of women.
They specialized in bringing abusive men to their knees.
Men who abused women and abused power, men like the Camden’s.

Sunday Prescott was a tech goddess, cyber espionage was her specialty.
During her latest assignment, she uncovered more than she ever hoped for: Bo Camden.
He was just like his father, right?
But the butterflies in her stomach told her something different.
And the touch of his lips left her breathless.

She was torn between  sleeping with the enemy or getting vengeance...Sweet Vengeance.

I have been waiting for the Iron Ladies stories and Sunday's story did not disappoint. Who says nerdy girls finish last? Danielle Norman has a way of writing characters that you want to be best friends with and be able to hang out with. Each, beautiful and strong with a fierceness of a "momma bear". Sunday is no wallflower and Bo sets her for a loop. Can she finally find that man of her dreams? Bo while initially an egomaniac turns into a swoony hero worthy of Sunny. I loved this story hard!

I love this series so far! The character's are so easy to relate to. The storyline keeps you wanting to read until it's finished. I love the raw humor and the suspense. This book has everything your looking for! A must read in my opinion.

Sweet and nerdy Sunday finally gets her story told and what a doozy it is. But to fall for the "bad guy" totally not her style. But when these ladies fall, they fall hard.
I am loving this whole series. Nothing but bad a** women who know how exact vengeance when needed.

"Oh, shit, get a load of this," Sunday hollered from behind her computer. "Someone finally came forward and gave a tell-all on that recluse billionaire, Alex Ruehle. Apparently, he has lots of women, and they all know about each other."
"And they don't care?" Adeline asked.
"No. Doesn't seem like it," Sunday confirmed.
Sunday
"If they don't care, then neither should we, let's move on." Melanie huffed.
"Wait, wait." Sunday held up one hand. "It's his pet names for the women that people are freaking out over. They have a hierarchy, and the one with the most seniority is called Clam One. The next is Clam Two."
"Did you say clam?" Adeline slid one hand down her long ponytail.

"Yep. And they know it, and they refer to themselves as it. He has five in total. Well, maybe four now since it was Clam Five who gave the tell-all."
"Can you imagine being called Clam?" Adeline asked. "Or worse, having your man say, I'm going to eat that clam, Clam."
"So, if he screws up and calls Clam Two Clam Three by mistake, is that a clam jam?" Olivia asked.
"No, I think if Clam Three shows up when it is Clam Two's time, then it is a clam jam, sort of like a cock block." Olivia was laughing so hard she could barely get the words out. "I wonder what he bought them for Christmas. The finest Eau De Clam Juice?"
"Pearl necklaces?" Olivia offered.
"Go, let me read in peace." Sunday smiled at her friends.
"Hey, this is some funny shit right here, they should add our commentary in those gossip rags." Adeline walked over and gave Sunday a hug. "Besides, you don't read in peace. You always read aloud. Normally, we just don't bother commenting. This was really too good to let pass."
"If we can get Sunday off the computer for five minutes maybe we can discuss . . . I don't know, work?" Melanie asked.
"Fine. You have my undivided attention. Shoot.”

Before becoming a romance writer, Danielle was a body double for Heidi Klum and a backup singer for Adele. Now, she spends her days trying to play keep away from Theo James who won’t stop calling her or asking her out.

And all of this happens before she wakes up and faces reality where in fact she is a 50 something mom with grown kids, she's been married longer than Theo’s been alive, and now get her kicks riding a Harley.

As far as her body, she can thank, Ben & Jerry’s for that as well as gravity and vodka. But she says that she could never be Adele’s backup since she never stops saying the F-word long enough to actually sing.

Danielle writes about kickass women with even better shoes and the men that try to tame them (silly silly men).