Release Tour Package: Under the Mistletoe by JC Valentine 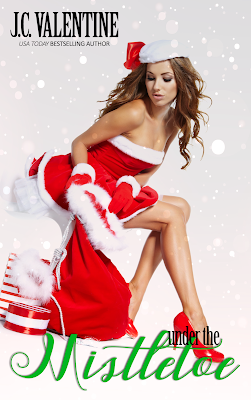 It all started with a Christmas party. How was I supposed to know an innocent game of “Spin the Bottle” would change the course of my entire life?
He’s the office shy guy. Lacking in classic good looks, I never noticed Niles Prescott until a twisted office game has us kissing under the mistletoe. That’s all it takes, and now I’m hooked. When Niles proposes a hookup with us and his roommates, I figure it can’t hurt. I’m always down to try new things, but this time, I might be biting off more than I can chew.
When a snowstorm traps me in a house with three sexy bachelors on Christmas, I have no choice but to play the hand that is dealt. But these guys aren’t saints, and when I find out they’ve been keeping a secret, one that could destroy what should be one of the happiest days of the year, I have to decide between keeping them and running for the hills.
But choosing is going to be damn near impossible because, now that I’ve had all three of them, one man will never be enough again.

Seven Minutes in Heaven. That was the game kids used to play for a poor excuse to kiss their crush—if they were lucky. The adult version is Under the Mistletoe, and it’s a hyped-up adult version of the same. Same rules apply, but with different props. Instead of hiding in a closet, two unfortunate souls are peer-pressured into standing under a stupid, dangling piece of mistletoe nailed to an archway to share a kiss.
It’s me. I’m the unfortunate soul tonight. I can’t say the same for Niles. He seems pretty damn happy about the whole thing. And why wouldn’t he? He’s been the underdog for as long as I’ve known him, which is in the ballpark of five months, but it’s pretty obvious that he’s the office nerd. No dates, no history of torrid affairs, no drunken stories to tell. The guy is as straightlaced as they come, right down to his pressed slacks and combed back hair.
I have to admit, though, he does have some killer green eyes. One of the lucky two percent of the world’s population, the bastard.
I look up into those eyes now, wondering how in the world I got myself into this mess. Then I remember it happened somewhere between the RumChata and Marisa’s mixed cocktails that were more like fireballs tearing out the lining of my throat as they clawed their way down my esophagus.
Office parties are the shit. Don’t let anyone tell you differently. And if they aren’t, then you’re not working in the right one.
Five years ago, I was lucky enough to find the perfect fit in terms of workplaces and people. Then I got fired for making a pass at my boss, and just when I thought I’d never find another Cinderella shoe like that one, I stumbled upon the little diamond called Fairweather Corporation, and while I have no earthly clue what they do or how they do it beyond the paperwork I push, it became an unexpected second home away from home.
So the whole point of this brief walk down memory lane is that there’s no way in hell I can shirk my responsibilities of kissing Mr. Niles Prescott tonight or any night, because at this early stage in my career with this company, I can’t afford not to be a team player. If that means swapping spit with a pasty version of Urkel, then so be it. Bring on the smooches!
Niles stands nervously in front of me, biting a thin lower lip, while our buddies watch on, jeering at us to “do it, do it,” and I know it’s now or never.
I waggle an eyebrow, take a step closer, and Niles takes an audible breath as I reach up to his lofty height and take his gentle face between my hands. “Kiss me like you mean it,” I tell him as I lift onto my toes and bring my mouth to his. 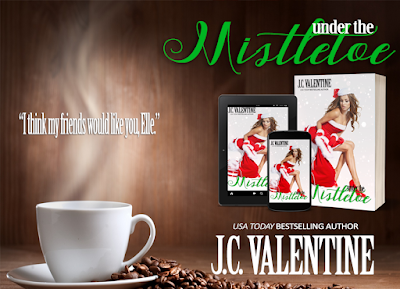 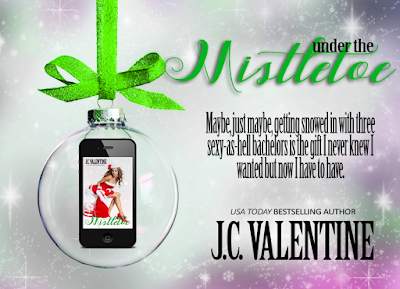 J.C. Valentine is the USA Today and International bestselling author of the Night Calls and Wayward Fighters Series and the Forbidden Trilogy. Her vivid imagination and love of words and romance had her penning her own romance stories from an early age, which, despite being poorly edited and written longhand, she forced friends and family members to read. No, she isn't sorry.
Living in the Northwest, she has three amazing children and far too many pets. Among the many hats she wears, J.C. is an entrepreneur. Having graduated with honors, she holds a Bachelor's in English and when she isn't writing, you can find her editing for fellow authors.