Blog Tour for Becoming the Boss by Hayley Faiman

Today we have the release blitz for Hayley Faiman’s BECOMING THE BOSS! Check it out and get your copy today! About BECOMING THE BOSS:

Luciana Rossi is untouchable, the Principessa of the Zanetti Famiglia, until one day she becomes extremely vulnerable. Unsure of who to trust, or where to turn, she follows the man that she’s had a connection with since childhood. Gavino Santoro is hungry. He craves power, control, and Luciana. Taking over the Zanetti Famiglia has been his goal since he began climbing the ranks of one of New York's most powerful families. Now that the power he craves is within his grasp, he needs the wife that will complete his image of being the new Zanetti Boss. Even if he has to lie and manipulate the beautiful woman to bend her to his will. Two people doomed by circumstance. An organization in upheaval. Nothing but uncertainty in the future. Morality is nothing but a concept. This is the beginning of the Zanetti Famiglia’s new empire.

Get Your Copy Today: “Nothing in this house, including the cars, the clothes, the money, or you, belongs to your father anymore. It won’t be automatically transferred to you either. It belongs to the new Boss.” “Meaning you?” I ask, my voice barely above a whisper. He smirks. “Nail on the head, cucciola. Get in the fucking car.” Turning my head, I look behind me at the closed door that leads to the only house I’ve ever lived in. My life is over. The only life I’ve ever known is over. I could run to Mauro instead of getting into this car with Gavino. But I have a feeling that I would regret that immediately. I’m not sure which devil to choose. The devil that I know without a doubt will be cruel, that I will hate with every breath that I take or the one that I’m attracted to, the one that I could easily fall for and end up completely heartbroken with. Neither idea feels the slightest bit appealing. No matter what, I’m going to end up battered, bruised, ruined, and broken. Though I have a feeling that I was born with that fate, there would be no way around it, my father alive or dead, this is how I would always end up. Just like my mother. Buried and dead before I reach the age of forty. Squaring my shoulders, I inhale a deep breath and walk over to the passenger side of the car. Opening the door, I sink into the soft seat. Buckling the belt, I slowly turn toward Gavino. “I won’t hurt you, not physically. I swear it, cucciola,” he vows. Gulping, I nod, my eyes searching his. “But you will hurt me?” “Undoubtedly.” I was born and raised in a small farming town in California. I met my husband when I was 16 and he was 19. We married four years later and have two little boys! We lived in Oregon for a few years while he served in the US Coast Guard. Texas is now where we call home, where our boots rest, and where we’re raising our two little boys and a chocolate lab named Optimus Prime.

Connect with the Author: 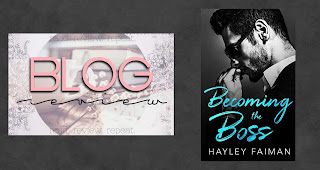 I went into this story with my eyes open and no "thoughts" of what to expect. Because when I read that blurb I KNEW whatever I expected wasn't going to happen. This book had its high and lows and the love story was slow, but everything in between kept me so focused that I didn't mind the slow-burn. Enjoyable story!