Book Blitz & Giveaway ~ The Harder They Fall by Joanna Grace 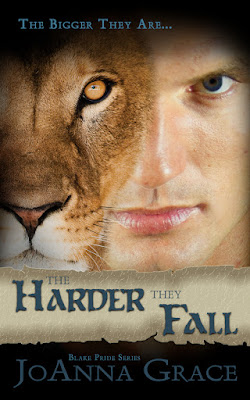 With two newly mated couples in the alpha house, Conall needs a serious breather. He’s used to being the fifth wheel but now the distinction is amplified. When the opportunity for a couple days of freedom arises, he volunteers to take winter supplies to a mountain-dwelling widow and then spend some time hiking alone. Plans change when he meets a woman who evokes his lion’s protective streak and stirs his human desires. She meets none of his expectations for a mate, but that might be exactly what he needs.

Madelyn has been alone for nearly a decade. Ashamed of what she has become, she banished herself from the Blackburn Pack and resigned herself to a solitary life in the mountains. With no plans of change, it’s alarming when a young, alluring lion shifter arrives awakening her senses and challenging her situation. Her inner bear is still haunted by the last man who tried to claim her and she doesn’t want to make the same mistake again.  Madelyn must discern if Conall is worth the risk or of he’s another heartbreak just waiting to happen.

While Conall is tucked away in the woods with Madelyn, the rest of his Pride faces an attack. In haste to go rescue his friends, he might throw the most vulnerable person of all to the wolves. But are they friend or foe?

It was all too easy to let his mind wander, to think about absolutely nothing except for where his paws would land with the next step. The walking path to the cabin was clear if you knew to look for the notches in the trees. He could travel like this all day and not get bored, never tire. Being in the wilderness liberated his lion; the burden he carried behind him only added a minor challenge to his muscular frame.
This was exactly what he needed.
The next four hours passed slowly and quietly, a vast change from the chaos of the last few weeks. For the first time in a long time, he turned off his brain and let his lion dominate his actions. His wide paws navigated the terrain with no problems. His ears alerted him to the movement of the forest creatures and his nose picked up the various scents of nature. Conall lost himself into his lion and his human counterpart took a well-needed mental nap.
Then he heard an angel.
The voice echoed around the woods and he froze with one paw off the ground. His feline ears perked up. After living with Vivian Blake, diva extraordinaire, for five years, he knew musical talent when he heard it. Vivian had the most beautiful voice he’d ever heard…until right then. Closing his eyes, he crouched down, still as death, to listen. The notes rose and fell flawlessly on pitch and with incredible ease. Her range was awe-inspiring. His breath caught in his throat as he listened to her build up to a note so high and delicate, it caused his heart to soar in anticipation. The emotion of the words, the love conveyed in every measure resonated in his chest. Tendrils of melody wrapped around him, gripping him tighter with every beat. Had he been in human form, he might have fallen to his knees. As it was, the four legs of his lion shook with the driving need to get closer to the source of such mesmerizing singing.
He took cautious steps over the crest of the hill to look upon the cottage set snugly among the evergreens. Green tin roof and logs made from local timber provided camouflage. Smoke rose from the chimney; the smell traveling the air currents was divine. Three chairs rocked on the porch, pushed by the invisible hands of the wind. Although the coming winter cold had scared them away, it was clear the cottage was usually framed with flowers. A brown picket fence protected a garden. He envisioned Snow White singing to the forest creatures as they scuttled around her feet.
Ha, he thought. Any moment now, some old woman would come outside with a radio in her hand.
He didn’t want the fantasy to end. The lion closed his eyes and let the gentle voice wash over him. Peace settled in his chest, a heavy weight dissolved from his shoulders. The notes infiltrated his veins and he felt absolutely drunk with contentment. Her love song pierced him and eased each breath he took.
Incredible…
The notes cut off as soon as the wind shifted.
“Who’s there?” chimed an angelic voice. His singer. 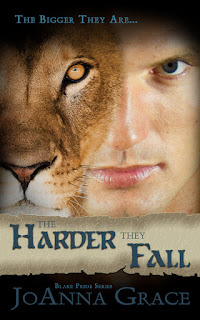 Book 1: Pride Before the Fall 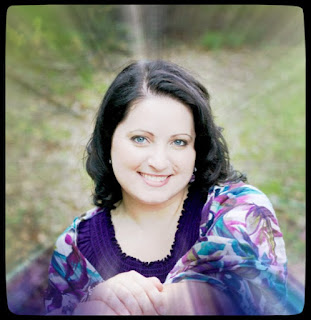 JoAnna Grace lives in a world of alpha males and strong females where true love conquers all—at least in her mind! Author of The Divine Chronicles, the Blake Pride Series, and more, this writer loves paranormal and urban fantasy romance novels.

From the time she started holding a crayon she began to create magical worlds. Her first book was a series of pictures about a puppy princess. The story changed each time she told it, but there was always a happy ending! Her first written story was about girls who changed into tigers.
Now those stories have become a bit more complex.

JoAnna’s tales are spun at her home in East Texas where she lives with her husband, three kids, and a couple dogs. When not hiding behind the computer screen you can find her camping, boating, and shopping.

Sign up for her newsletter to receive information about new releases, events, and giveaways! www.authorjoannagrace.com