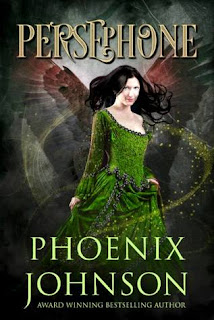 Persephone takes her life and heart into her own hands when she meets and follows a mysterious stranger on a sweet summer day. However, tragedy strikes, and her lover, the mystifying Adrian, begs her as his life fades: Persephone, head to the sea. Honoring his request, she begins a journey where she discovers her true heritage and finds the family she always dreamed of. Persephone almost finds peace and happiness until her past catches up. She is not about to give up, however, and is determined to obey Adrian’s dying wish.

But what is waiting for her at the shore? Will she find her destiny, or lose everything she had fought so hard to find? Can she become the Witch that her true parents wanted her to be, or will she succumb to the Darkness? 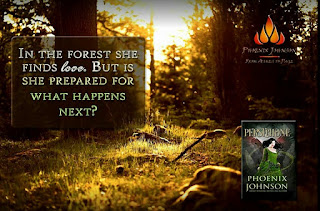 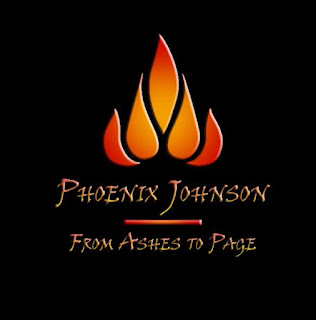 Phoenix Johnson has always been intrigued by the written word. Even when she was a young girl, she usually had her nose stuck in at least one book, and her need to read would drive her to peruse the back of the same cereal box each morning at breakfast. Paranormal and fantasy captured her heart, with tales about dragons, magic, and fanciful creatures sweeping her away to a wonderful new world where she felt she truly belonged. While she dabbled in writing while in primary school, it wasn’t until high school that she decided she should try her hand at writing her own book, and even gave poetry a try.
She wandered away from writing for a few years, but was soon encouraged to return and, within months of picking up the proverbial pen, Phoenix’ first story, The Wolf In The Neighborhood, was accepted for publication by Naughty Nights Press. While working on the rest of the Wolf Smitten Trilogy, Phoenix decided to take on a university degree, and is now in the final stretch of her Bachelor of Art’s degree in Professional Writing and Publishing, with plans to continue on to her Master’s degree.
In early 2015, Phoenix was thrilled to discover she’d made two Top 5 lists with three entries in the Easychair Bookstore Awards. In June, it was announced she had placed first in Best Paranormal with Once Bitten Twice Shy, the second installment in her Wolf Smitten Trilogy, while The Wolf In The Neighborhood and Wolf Smitten placed third in their respective categories of Best Paranormal and Best Series.
With her inclusion in the Alphas on the Prowl Box Set in 2015, Phoenix hit the top 100 bestsellers lists across numerous distributors, number 1 bestseller on several Amazon lists, and this was quickly followed by the announcement of her achievement of number 1 bestseller for her publisher, Naughty Nights Press, for the full second quarter of 2015. The awards and achievements have only served to strengthen her ambitions, and she is now aiming at reaching the bestseller lists for USA Today and New York Times.
Phoenix has been working hard to make 2015 her year, and has been busy organizing paranormal anthology Twisted Tales with seven other authors. Its release at the end of June is greatly anticipated, and she is extremely excited to see where her writing career takes her next.