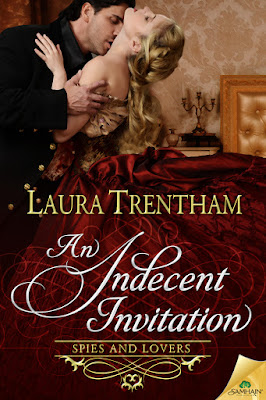 Keeping her safe is difficult, keeping a proper distance from her is downright impossible.

Lady Lily Drummond understands only too well the danger of spy work. Her father, a preeminent master spy, has been missing for months, and her brother barely survived his final mission for the Crown. Lily is still determined to help find her father, no matter how hard her brother and his best friend try to keep her in the dark.

Busy trying to untangle the web of deceit surrounding the Earl of Windor’s disappearance, Crown spy Gray Masterson also has to ensure Lily Drummond, the gangly, awkward child who was his constant shadow growing up, doesn’t get herself ruined at her London debut. But the girl with scraped knees and elbows has evolved into a lush, sensual beauty surrounded by a bevy of suitors.

Realizing Lily is going to investigate on her own if he doesn’t let her join the hunt for her missing father, Gray assumes he can give Lily a few minor tasks to pacify her, but he quickly learns she is a valuable asset. Moreover, she fairly crackles with life and warmth—things he craves after his dark years in service.

Warning: This book contains spies, scandals, naughty liaisons in houses of ill repute, men who think they know everything and women who know they do not.

Lily slyly watched Gray confront Montbatton and then execute a courtly bow to Lady Abbott. How long before her reckoning? Only a few minutes had passed. Not nearly long enough for her heart to slow. He approached—not with angry mincing steps or even hurried anxious ones, but in a casual loose-limbed saunter.
Did he know?
Gray had been lanky in his youth, but he’d always possessed an unusual agility and grace. Seemingly never feeling awkward in his body, he moved with a compelling confidence that had only grown more telling over the years. A broad, deep chest and narrow, lean hips complemented indecently muscled legs. Not that she had made a close examination, heavens no, but she could hardly miss them flexing during their dance.
Perhaps he wasn’t the tallest or the most handsome man in attendance, but there was something about him. In fact, several ladies’ heads turned when he passed them by. Not that he noticed, because his gaze pinned her like an insect on display.
Not smiling nor frowning, his face revealed not a single clue to his mood. He stopped directly in front of her, cocked one foot in front of the other and clasped his hands behind his back. A purely masculine stance that, along with his silence, set her nerves jangling.
She tucked several escaped tendrils back into pins and then opened and closed her fan a few times. Unable to tolerate another second of the increasing tension, she yielded, feeling somehow as if she’d lost the first skirmish of a war. “We meet again, Mr. Masterson. Mayhap did you learn anything interesting?”
His eyes, vibrantly green and arresting even partially shielded behind his spectacles, shimmered with an emotion she couldn’t interpret. “I learned Montbatton is indeed in pursuit, and you should expect an offer. He informed me most vehemently to pass that information on. Lady Abbott thought it highly amusing I didn’t know your name. And lastly, I discovered Lady Lily should be in the corner with her chaperone.”
“Very impressive, but did anyone reveal my name?”
“Absolutely no one.” A single eyebrow arched above the rim of his spectacles.
Her shoulders, which at some point had bunched toward her ears, relaxed, and she tapped her fan against her lips to stem a victorious smile. “And I was so looking forward to another dance. Mayhap I’ll help you find your wayward friend instead. Over here did you say?”
A dark-haired matron in a red dress occupied the corner in question. She sat upright in a chair next to a ficus and, at first glance, appeared to be serenely observing the tableau of couples on the dance floor. The only indications she was soundly asleep were her closed eyes and slightly agape mouth. Her Aunt Edie was quite possibly the most worthless chaperone in all of England, which suited Lily perfectly. She’d no desire to relinquish the relative freedom she enjoyed in the country.
“That’s certainly not your debutante,” Lily said. “Come, let’s stroll while we look.”
“God’s teeth, that’s most likely her chaperone. Sound asleep while Lily runs wild.” Gray sounded truly aghast.
“Yes, your friend might be in the company of the worst sort of rogue who inappropriately whisked her away.” A cough covered her spate of giggles.
“Indeed.” His tone turned solemn. “She’s a highly impulsive chit not used to male attention. No doubt, she’d be easily lured into an indiscretion by a charming smile or prestigious title.” He tutted. “They’d only be after her dowry, poor thing.”
She sucked in a huge breath, ready to unleash her tongue, but his next words ripped the air from her lungs.
“Would you care to take a turn in the gardens as I haven’t earned a dance?”
“What about your friend? Shouldn’t you find her? What if she waits for you?” Her words spilled out too quickly. How many times had Rafe told her to never enter the gardens with a gentleman? At least a hundred. Although it was only Gray. If any man could be trusted, it would be him. Wouldn’t it?
“I was to surprise her tonight. She doesn’t even know I’m attending. We won’t be long, just a breath of fresh air. It’s rather stuffy, isn’t it?”
“I suppose a very brief turn in the garden wouldn’t hurt. It is awfully close in here.” Lily snapped her fan open and cooled herself with frenzied flicks of her wrist. Was it the crush of people or his suggestion making her feel so heated? 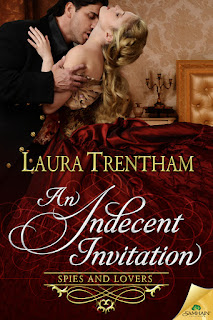 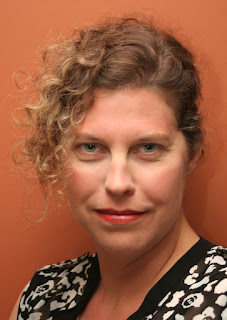 I was born and raised in a small town in Northwest Tennessee. Although, I loved English and reading in high school, I was convinced an English degree equated to starvation! So, I chose the next most logical major - Chemical Engineering- and worked in a hard hat and steel toed boots for several years. Now I live in South Carolina with my husband and two children. In between school and homework and soccer practices, I love to get lost in another world, whether its Regency England or small town Alabama.

Books One and Two of my Falcon Football Series are available from St. Martin’s Press (Slow and Steady Rush; Caught Up in the Touch). Book Three, Melting Into You, is available for preorder.

Book Two of my Spies and Lovers Series, A Brazen Bargain, will release January 2016.