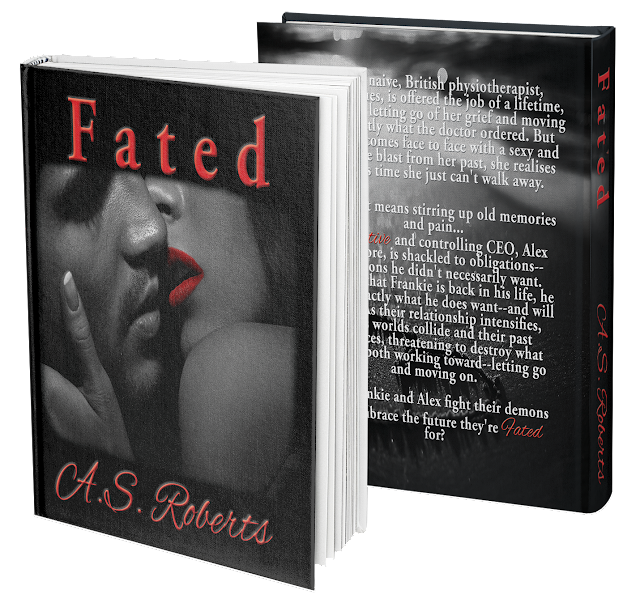 When naive, British physiotherapist, Frankie Jones, is offered the job of a lifetime, she decides letting go of her grief and moving on is exactly what the doctor ordered. But when she comes face to face with a sexy and irresistible blast from her past, she realises that this time she just can't walk away.

Even if it means stirring up old memories and pain...

Assertive and controlling CEO, Alex Blackmore, is shackled to obligations--obligations he didn't necessarily want. But now that Frankie is back in his life, he knows exactly what he does want--and will have. As their relationship intensifies, Alex's worlds collide and their past resurfaces, threatening to destroy what they're both working toward--letting go and moving on. Can Frankie and Alex fight their demons and embrace the future they're FATED for?

This book is recommended for over 18's only, due to HOT content! 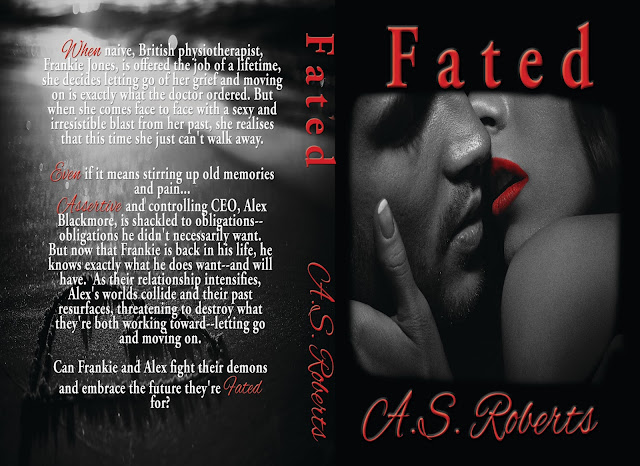 What sort of person isn’t able to attend the funeral of their only parent of any consequence?
Me, I was that sort of person.
I had suffered a sort of breakdown, the doctors concurred. Emotional stress and exhaustion they called it.
Pathetic my mother called it.
I was standing finally on very sodden soil, constantly having to move my feet, listening to the repetitive squelching noise my black boots made in contact with the mud. I repeated the movement over and over, in order to stop them being consumed into the ground. The very ground that now held my dad. All the while I was struggling to choke back the tears which threatened to fall.  Continuously I rubbed my hands together, to keep them warm.
Although it was August, the weather was obviously empathetic and had the same thoughts and emotions as me. The skies continued to darken over and the rain fell in a heavy, sluggish drizzle.
I was finally here, wrapped in a heavy coat and my own grief. Audibly sighing, my eyes ran over and over the words on the headstone.

But there was no mention of me on there, his only child.
In the world of my stepmother I didn’t exist. She hadn’t given birth to me, so therefore I was insignificant.
I caught my breath, trying to swallow a gulping sob. I conjured up picture memories in my head. At least he had finally managed to tell me he loved me, even if it was only the once, and on his death bed.
I looked up to the sky and watched the clouds travel unhurriedly overhead. Closing my eyes, the droplets fell; they hit my face and grouped together, finally running down my neck in rivulets.
The sadness I felt was completely overwhelming.
Never be the unwanted pregnancy of two people who hate each other’s guts, would be my advice to anyone.
From behind me two hands came forward. They gently rubbed up and down my arms, trying to formulate a soothing sensation
‘Sweetheart, you know we are here for you, don’t you?’
The gentle voice of my aunt came through to me. I turned to her, my aunt and uncle swaddled me up in their arms. There we stood, clustered together for several minutes.
‘Come on, Frankie,’ I heard my cousin JJ speaking and as my aunt and uncle pulled away from me, he took their place and pulled me in tight against his side.
‘Let’s go home.’
I managed a fragile smile in answer, staying as close to him as was possible, wrapping my arm tight around his waist. JJ gave me the strength I had always felt I lacked. I was so pleased he had come back from America. His presence here today meant everything to me.
I was last to walk down the well-worn path to the front door of my aunt and uncle’s small, but very homely, terraced house. The old wooden gate shut with a bang behind us. Flexing and contracting on its very antique, rusted spring.
‘Frankie love.’ The raised voice of our next-door neighbour, broke me out of my melancholy thoughts. I raised my eyes from the cobbled path. She came out of her front door quickly; obviously she had been awaiting our return, twitching the net curtains. Her arms were laden.
‘These came for you, my dear.’ She handed me a large, beautiful bouquet of mixed flowers, the colours of which seemed like a rainbow on such a wet day. Her face showed concern for my obviously distressed appearance. She ran her hand fleetingly up and down my arm.
‘Oh thank you, Norah’ I took the bouquet from her. Puzzled as to where they had come from, I pulled the card from the small envelope and started to read. 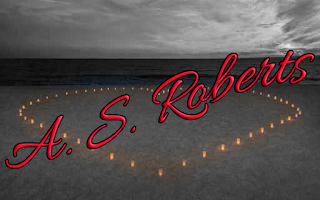 I am a chocolate addict, children loving, mad woman. A self confessed book whore who reads more than she exercises. Luckily I am married to the love of my life, together we have four boys and lots of dogs. I live in south east England, although I love to travel. When I'm not reading... I can be found writing and drinking copious amounts of tea!