Release Blitz: What He Needs by E.M. Denning

WHAT HE NEEDS
Desires Book 1 by E.M. Denning 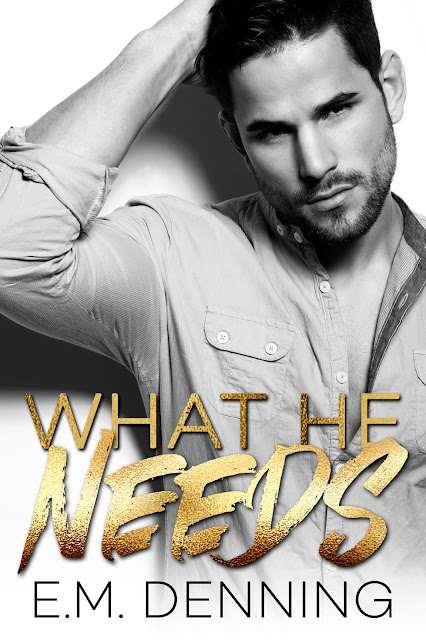 When Craig walks into the first kink club he’s been in for months, the last thing he expects to see is his former Dom, Tim, wearing a collar. If learning his ex is a switch isn’t shocking enough, Craig quickly finds himself on the wrong side of his ex's Dom. When the reunion turns ugly, another Dom swoops in and saves the day, and Craig is too shaken to argue when the sweet Dom steps in and takes care of him.

Alan noticed the boy the minute he walked into his club. It was hard not to. He was beautiful, sad, and fully clothed. Once the boy is in Alan’s arms he knows he doesn’t want to let him go, maybe ever. He worries that even though his hardcore Dom days are behind him, his experience will scare Craig and he’ll lose the chance to have something real with him.

Their relationship quickly heats up, but Craig can’t stop wondering if an inexperienced sub will be enough for a seasoned Dom in the long run.

Alan had never seen a sight more beautiful than Craig. When he rolled the boy over and started massaging his chest he was completely pliant under his touch. Alan’s cock was rock solid almost to the point of being painful.

Being trapped in his trousers didn’t make things any easier. From the moment he first touched Craig and the boy whimpered and then relaxed, Alan wanted him. He wanted him relaxed, and happy, and begging. Then Alan rolled him over and Craig’s breathing became shallow and needy. His beautiful cock was rock solid and it was all he could do to ignore it. This wasn’t supposed to be about that. This was supposed to be a simple massage, something to relax Craig and help him float for a while and hopefully forget about that bastard Tim.

“Please, Sir. Please. Please.” Craig’s voice was thick with need and his eyebrows started to draw together. The poor boy was aching for release. Alan ran his hands down Craig’s torso. He loved the way Craig’s muscles seemed to chase his touch.

E. M. Denning is a writer from British Columbia. She loves her family and her animals and anything cute and fuzzy. She was born a hopeless romantic and when she’s not writing romance, she’s probably reading it. She loves love.