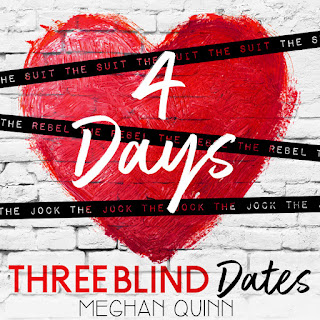 We can not wait for this release! Check out this excerpt for THREE BLIND DATES by Meghan Quinn! Don't forget to preorder your copy TODAY! 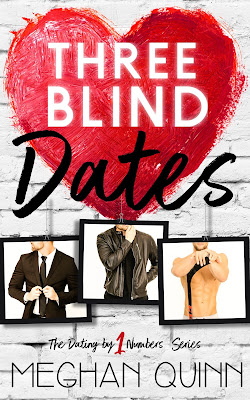 "Good Morning Malibu, it’s another beautiful day on the west coast! I'm Noely Clark, your host: and I'm in the market for love…”

When the publicity team of the new local restaurant, Going in Blind, began their search for a hot, local celebrity to promote the wildly popular eatery, they couldn’t have found a better person than me.

I signed up immediately.

A hopeless romantic with an exceedingly demanding schedule, I've found it impossible to find the man of my dreams—so Going in Blind seems too good to be true! That’s until they start setting me up on dates—three very different, very attractive, very distinct blind dates—and only one thing is for certain . . .


Good Morning Malibu,
I'm Noely Clark, and I have a choice to make.
The question is who will I choose; the suit, the rebel, or the jock.


“There is no way that’s what that line means.”

“That’s ridiculous. What, did you study palm reading as well as Spanish?”

He chuckles and says, “I just know things. And that line right there means you’re allergic to coffee.”

I shake my head and laugh. “You’re such a liar.”

He strokes my palm with his finger, running it along every line, making my insides flutter and my breathing pick up with each stroke. He’s so close, his body practically on top of mine, his breath pressed against my ear, his scruff rubbing my skin ever so gently. And me, well, see my hips? Yeah, they’re slowly gyrating in his direction. I would like to blame the margarita, or even the music, but I know that’s not the case. It’s my libido skyrocketing into dangerous territories from the way this man lightly strokes me in just the right way.

“Not a liar, just telling you what I see.”

“Is that so?” I lean in closer and ask, “Then how come I have coffee every morning and I’m fine? Seems to me like you just wanted an excuse to touch me so you pretended to be a palm reader.”

I hold my breath, waiting for his answer.

“You’re right. I did. Now give me a chance to touch you even more.” He retreats from the booth and holds out his hand for me to follow.

I take it without even giving it a second thought. Smiling devilishly, he guides me to the dance floor and immediately spins me into his arms where he takes my hands and links them behind his neck. Pulling me into his body, he places his hands on my hips and presses his forehead against mine.

As if it’s second nature to him, he starts moving us back and forth along the dance floor, his feet effortlessly gliding us. Intimidated at first, after a few passes across the floor, I start to feel the music and my muscles begin to loosen up.

“That’s it,” he whispers just loud enough so I can hear him over the music. “Loosen those hips, Sassy.”

A distinct trumpet and cowbell echo through the room, setting the pace and tone to the dance. It’s fast, yet commanding, encouraging us to grind together, and that’s what Beck does. His hands slide from my hips to my butt where he grips tightly and pulls me flush against his crotch. With my legs entwined with his, we stay in place as our hips gyrate together.

Breathless and turned on, I match his gaze with mine, his seductive eyes penetrating any last wall I might have had before this date, and for once in a long time, I let loose . . . completely.

Leaning my head back, I let my hair fall behind me and give it a little shake before lifting my head back up and meeting his lust-filled, greedy eyes. His hands grip my butt tighter and I’m greeted by a noticeable hard-on.

My fingers start to play with his hair, twisting and turning the short strands, causing his eyes to haze over. Is it weird I want more? That even though our pelvises are pressed against each other, I want to be closer?

The music now flowing through me, controlling my every movement, I glide my hands down to his shirt where my fingers dexterously undo two more of his buttons, exposing more of his tan skin, his necklace in full view now. It’s a medallion I can’t quite make out, but it doesn’t matter right now, because all I care about is the muscular expanse of chest in front of me.

I slip my fingers inside his shirt and dance them across his chest, feeling the sinew of muscles flex with every move we make together.

When one of my fingers accidentally caresses one of his nipples, he growls into my ear and turns me around in his arms, causing me to temporarily lose my breath, that’s until his hands find mine again, securing my butt right against his crotch. I sigh and loop my hand around me to the back of his neck, anchoring me in place while he swivels our hips together, his lips pressed against my ear.

“Fuck, you feel good against me,” he whispers. His breath sends chills up and down my entire body as the music continues to guide me.

I push my butt even harder against his erection, heavy and obvious, swiveling my hips, loving the way I can feel his excitement so easily. I love that I affect him like this.

I’ve never been with a man so comfortable in his own skin that he doesn’t care about how I affect him. It’s like he’s proud of it. Of us.

Feeling the music, we dance slowly in tandem, letting the beat guide us. Still hanging on to him, my other hand now on top of one of his, he starts to feel the length of my leg, his body bending just slightly to reach the hem of my dress. When he moves his hand under the fabric, my breath stills for a second before he pulls away and lifts his hand back up my body until both of his hands reach my ribcage.

His head peers over my shoulder, his eyes trained down the valley of my cleavage. “I told you this dress was going to get you into trouble tonight and the way you’re moving against me, my self-control is slipping, Sassy.”

Taking a deep breath, I move his hand farther up my body and say, “Then let your will slip.”

“Fuck,” he growls into my ear, letting his hand move to just below my breasts. I suck in a breath from the contact and wait for him to move a little higher, but he doesn’t. Instead, he swivels his hips with mine and moves his hands down my sides until they’re resting on my thighs, his thumbs closing in on the juncture between my legs.

The heat level between us rises to inferno in the matter of seconds and my skin starts to prickle with need, a yearning I haven’t felt since . . . well since Jack, but before that, since I can’t remember.

“I don’t know how much more dancing I can do with you,” he says into my ear. “I’m about to combust here.”

I turn in his arms and look straight at him. “Then let’s get out of here.”

The way the words fall off my tongue sound so foreign to me, but then again, there’s not a chance in hell I want to take them back. 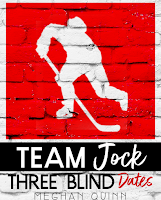 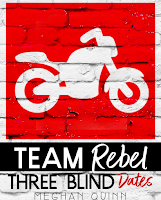 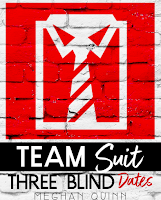 Author, wife, adoptive mother, and peanut butter lover. Will dance for laughs, won’t eat anything spicy because you asked, but will squeeze boobs in replace of a hug. Grew up in Southern California (Temecula, anyone? Anyone?) lived in New York (the armpit of NY, not the city) and now resides in Colorado with my wife, son, two dogs, three cats, and my multiple book boyfriends. Loves love, anything romantic, and will die if I ever meet Tom Hanks. Yay, books!

Find me on Goodreads:
https://www.goodreads.com/author/show/7360513.Meghan_Quinn