I asked for his criteria for bed buddies–that's the PG version.
He swore at me and said he didn’t do groupies. And just like that, our friendship was off to a great start.
Reese Forster was the starting point guard for the Seattle Thunder.
Gorgeous. Cocky. Loved by the nation.
He’s also attending preseason basketball training camp where I used to work.
Correction: where I work again, because I was fired from my last job.
And dumped.
And I might have a tiny bit of baggage, but that’s normal. Right?
Reese and I shouldn’t have become friends. We shouldn’t have become roommates.
And we really shouldn’t have started sleeping together … (Except we did.)
I’m adorably psychotic. He’s in the NBA.
This is not a disaster waiting to happen, at all.
Teardrop Shot is a 107k standalone with brand new characters. 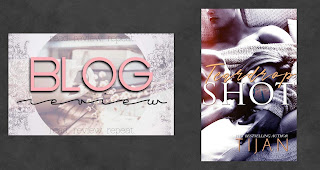 At the end of this book Tijan writes in the author acknowledgements - "This book gutted me, and I hope, in a good way, that it gutted you too"
Well let's just say she nailed it. I did not see the many twists and turns coming in this book. I had myself convinced Charlie was going to reveal a darker sinister reason why she was no longer with her ex. But once the real reason was revealed, I was pretty much crying for the rest of the book. But there were tears of joy as well. Then there were the tears of hilarity. Charlie is just so out there at times. She was what Reese probably never knew he needed or wanted. I liked the way they met. I thought once again that I knew how this story was going to play out, but yet again I was wrong. So gloriously wrong. I now know I should never try to anticipate what will happen in a Tijan story, because anything I could possibly come up with would be totally incorrect.
I loved every word.
I voluntarily reviewed an advanced readers copy of this book