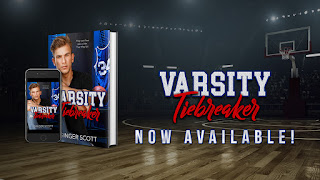 We're celebrating the release of Varsity Tiebreaker!  Take a peek inside the book and one-click yours today! 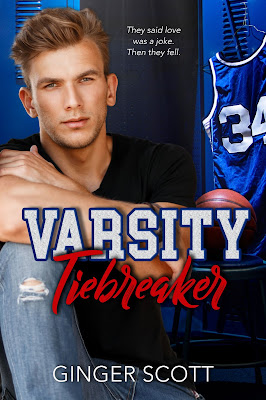 Varsity Tiebreaker
Book 2 in The Varsity Series by Ginger Scott

Tory "Salvatore" D'Angelo loves falling in love...just not for real. The star basketball player at Allensville Public High gives his heart away one girl at a time then takes it back when he's ready to move on. No serious feelings, no serious pain.

They’re both good plans until Abby’s jaded heart gets all tangled up with Tory’s hopeless one. A friendly rivalry grows into friendship, and long talks start to blur the lines.
Just one problem—Abby’s current boyfriend is Tory’s twin brother, Hayden.

This is book 2 in The Varsity Series by Ginger Scott. You can start this series of stand-alone mature YA sports romances now with Varsity Heartbreaker. Book 3, Varsity Rulebreaker, releases in October.

Tory D’Angelo
I’m not sure if she realizes she’s trembling, but she is, so to stop her from digging any deeper in a place so public and so filled with the fumes of microwave pizza and Coke machines, I reach forward and rest my hand on top of hers. We both freeze immediately, and I’m pretty sure my palm is already sweating. Her gaze lifts to meet mine, but I don’t let go of her hand just yet. I don’t make this touch a big deal, even though it sort of is. That’s not why I did it, and I don’t want to cheapen it. With our eyes locked on one another, I let the air fill with the touch of silence just long enough for a ragged, emotional breath to fall from her lips.

“You have every right to feel the way you do,” I say.

“And how’s that?” she fires back. Her hand shifts under mine, but she doesn’t pull it away.

“You feel like your dad sees a business opportunity where he should see his daughter.”

She swallows and keeps her gaze on mine for a beat before finally leaning back, pulling her hand away and glancing off to her side. With a snort sniffle, she runs the sleeve of my brother’s hoodie across her eyes, erasing the tiny break that she let herself have.

I’m suddenly not hungry. I don’t think I have ever not been hungry, but I couldn’t eat the rest of my burrito now if I were forced at gunpoint. It’s not that I feel sick, but more that I feel…envious. I was fooling myself thinking that Abby was a passing crush I could dismiss easily. Two months of riding shotgun with her through all things June and Lucas was just long enough for me to get hooked on having her around. But while it’s my advice she’s listening to right now, it’s my brother’s fucking sweatshirt she’s dabbing her tears with.

“So, see you at the game?” I know my move to leave is abrupt, especially after she just bared part of her soul. If I stay, though, I’m going to say things I don’t mean just out of sheer self-preservation. This is precisely why I don’t do relationships, I just do flirting and hookups. Feelings…well, they fucking feel.

“What, did you change your mind and suddenly decide that nine-eighty bare-minimum wasn’t good enough?” Her nose wrinkles after her insult, but I think I get where it’s coming from. She just hit me with a major share, and now I’m bailing. Better to lash out. Her and I aren’t so different.

“Something like that,” I say, holding up my lunch trash as a wave goodbye.

Abby’s face shifts slightly, her wrinkled mouth and dimmed eyes morphing from the snarky expression that accompanies her tease to the look of a girl who just lost her brand new balloon to the sky.

“That hoodie…” I say as I walk backward, pointing toward the center of her chest. “Looks good on you.” I leave things there with a tight-lipped smile and a nod, a truce of sorts, not that Abby even knew we were in a battle. Hell, we weren’t. I’m the only one in a conflict, and it’s with my own damn self.

I manage to turn my back to her and toss my trash out without pausing to get one more little jab in to fully take things back to our version of normal. I think for now, I’d like to leave things nice. I wasn’t counting on her wanting to leave things that way, too, though.

“I’ll be sure to cheer for you, even if I’m wearing Hayden’s number,” she shouts.

I spin on my feet and give her a thumbs up, but keep moving away from her because if I turn around, I’ll keep trying to win her over. And she’s not mine to be won. 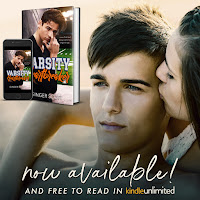 Ginger Scott is an Amazon-bestselling and Goodreads Choice Award-nominated author of several young and new adult romances, including Waiting on the Sidelines, Going Long, Blindness, How We Deal With Gravity, This Is Falling, You and Everything After, The Girl I Was Before, Wild Reckless, Wicked Restless, In Your Dreams, The Hard Count, Hold My Breath, and A Boy Like You.


A sucker for a good romance, Ginger’s other passion is sports, and she often blends the two in her stories. (She’s also a sucker for a hot quarterback, catcher, pitcher, point guard…the list goes on.) Ginger has been writing and editing for newspapers, magazines and blogs for more than 15 years. She has told the stories of Olympians, politicians, actors, scientists, cowboys, criminals and towns. For more on her and her work, visit her website at http://www.littlemisswrite.com.

When she's not writing, the odds are high that she's somewhere near a baseball diamond, either watching her son field pop flies like Bryce Harper or cheering on her favorite baseball team, the Arizona Diamondbacks. Ginger lives in Arizona and is married to her college sweetheart whom she met at ASU (fork 'em, Devils).

Varsity Tiebreaker is not only the first from this series but also from this author that I have read. I loved the story of Tory and Abby, with all the emotions you find with teenagers going through tough times while in school. I look forward to reading more from this series as well as from the author.