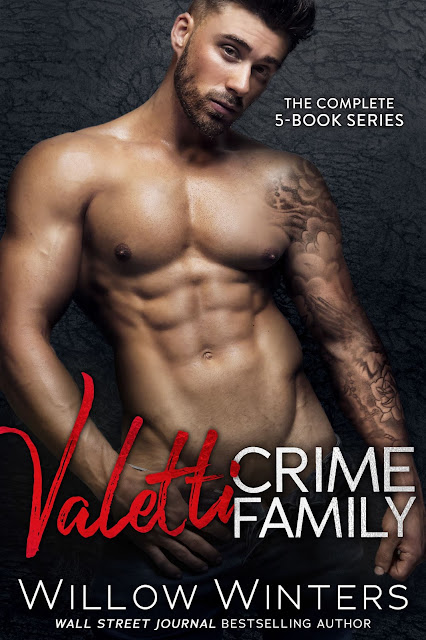 AMAZON TOP 100 series available in one bundle for a LIMITED time!

Dominic Valetti is only interested in two things: getting paid and getting laid.
He’s a bookie for the Valetti crime family, and he knows his sh*t. Dom’s busy doing business, no time to dabble in social niceties. The women that chase after him are only gonna get their hearts broken.
That is, until Becca stumbles into his office to pay off her ex’s debt. A hot brunette who’s just as guarded as he is and has a body made for sin… and for him. They’re not meant to be together. A woman like her shouldn’t be with a man like him. He’s mobbed up; she’s a good girl who deserves better.
When they push their boundaries and cave to temptation, they both forget about the danger. And that’s a mistake a man like Dom can’t afford.

His Hostage
He was supposed to take my life... Instead he made me his.
Valetti crime family underboss Vincent Valetti is hot. Like… jaw dropping, lip biting, panty wetting kind of hot.
Tall and muscular, with the kind of dominant, cocky attitude that makes a girl’s knees go weak.
He commands respect and fear from the familia, and he deserves it. He’s earned it. As for women… they can have one night and the most amazing f*ck of their life, but that’s all they get.
Until Elle.
Gorgeous, curvy, and looking for an escape, she calls to Vincent. Her innocence begs him to take her… f*ck her, ruin her for all other men.
Worse, he wants to protect her. In Vincent’s care, Elle witnesses a terrible crime -- and if she breathes a word of it, the Valettis are screwed.
Torn between the woman he craves and loyalty to his family, Vincent is put to the test.
He should kill her, but he can’t let that happen. He won’t. Vincent’s a man who takes what he wants. And he wants Elle all to himself.
She was in the wrong place and at the wrong time. Now she belongs to him.
Rough Touch (formerly titled Good Girl)
I’m not a good man, but I’m damn good at what I do.
I was raised to be ruthless, and as muscle for the Petrov mafia, that’s all I am.  Then she got caught in the crossfire, and when it was over, she was mine - given as a temporary gift. Once a mafia princess, now just a bargaining chip, she wasn’t a part of my plans.  She’s scared, alone, and has the most perfect, innocent baby blues that beg me to protect her.  There’s not an ounce of good in me. I don’t deserve her, but I want her. I want her sweet submission and tempting curves, at any cost.  Even if I have to kill every f*cker who stands between us.  This good girl belongs to me.  Cuffed Kiss (formerly titled Bed Girl)
She’s too good for me, but that’s not gonna stop me from taking her.
I’m not a good man, but I’ve never claimed to be. I’m the muscle for the Valetti crime family, and I fit the part with my hard, ripped abs, broad shoulders and cocky attitude.  I’ve never wanted for anything, until I met her... A woman I can never have. She's forbidden. Just being seen together would put a target on both our backs.  I can’t help imagining those lush, sassy lips wrapped around the one part of me that doesn’t give a damn she’s off-limits.  All I wanted was a taste of her tempting, forbidden curves. One moment of hot, wild passion, and I’m f*cking addicted. Everything and everyone else be damned. I’m making her mine.
Bad Boy
They thought I would do my job. They thought I would kill her. They thought wrong.
I’m a dangerous man. It only takes one panty-dropping, mouth-watering look to know it. You may be fooled by my good looks and charm. But my eyes give it away. I’m the hitman for the Valetti familia, and I’m f*cking good at it. They want men to talk, and I make them talk. They want men gone--bang, it’s done. It’s as simple as that. Until her.
She’s on my list, but I f*cking want her. On her knees and submitting to my every command. I'll give her a simple choice — die, or be mine.
I’ve always wanted this. Now that I have the chance, I’m taking it. I can fulfill those fantasies I know she has. I’m going to make her beg for it. 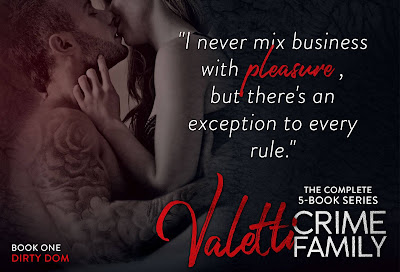 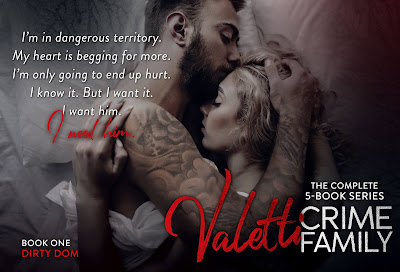 Willow Winters:  I like my action hot and my bad boys hotter. And I don't hold back on either one in my writing.  I'm so happy to be a #1 Contemporary Bestselling Romance Author. I'm so grateful and honored!  I actually started writing after having my little girl, Evie, December 2015. All during my pregnancy with her I read. I only wanted to read romance, and I read EVERYTHING. I would read a book a day — sometimes two.  In January 2016 I was staying up late with her and just thinking of all these stories.  They came to me constantly. And I finally sat down and just started writing. I always wanted to do it so I figured, why not? I never thought I would reach this point of success, to be honest. It’s insane to me that I have so many fans. And I love each and every one of them for all of their support.

If you would like to order signed paperbacks, you can do so here: Paperbacks