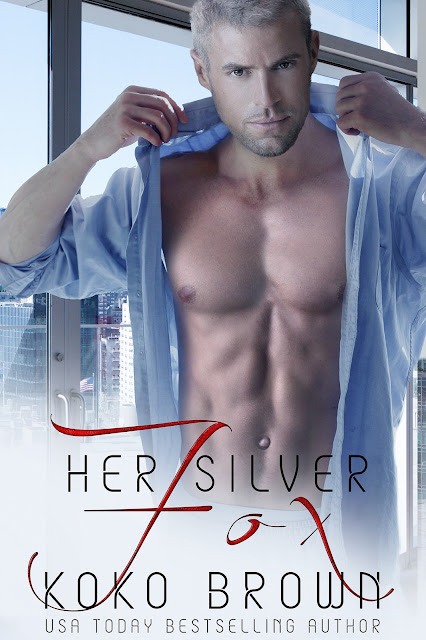 With running the family business and taking care of her old man, Shoshana Haufman’s life is complicated enough without adding a man to the mix.  All of that changes when her newest client, Patrick Kelly, waltzes into her show room looking to purchase a bespoke suit. Tall, prematurely gray, and handsome poured in a three-piece is the personification of the quintessential silver fox, pushing all of Shoshana’s buttons.
Lust as first sight is the order of the day, the chemistry is undeniable. And despite her initial reservations, Shoshana breaks her cardinal rule: never have sex with a client.
Equally affected, Patrick breaks his cardinal rule: never allow a woman to get the best of you.
Once he’s had a taste, Patrick isn’t willing to settle for just a brief fling. It’s either all or nothing. And he doesn’t lose. After all, everything he has he’s worked damn hard for it. So what could be so difficult about a mere woman who barely reaches his chest?
That ‘mere woman’ quickly begins to resemble a concrete wall.
Shoshana Haufman’s equally stubborn. She doesn’t do relationships. Her life is planned out and orderly. Her employees depend on her for their livelihood and her father with his diminishing health is sending her to an early grave or a bed at Bellevue Hospital. Adding a man–even a sexy, silver fox– is just way too complicated.
Not willing to be a client with benefits, Patrick sets out to crack this five foot anomaly in four-inch heels. She’s unlike any woman he’s been with. She’s not clingy, she doesn’t leave stuff behind to precipitate another meeting and she’s more than complete without him.
Instead of figuring out how to convince her to be in his world, he finds that sacrifices have to be made on his end. Throw in some sweaty sex, frozen yogurt and a heavy dose of trust, this silver fox has found the perfect remedy to make this master tailor realize it takes courage to love and to be loved, and that the love given to you is an amazing sacrifice.

She touched her lips against his. Liking it, he growled into her mouth, and it reverberated inside her, heightening her own desire and she realized that the tea room was just as good as her bed upstairs. He’d lock the doors and none of her employees—even on the threat of death--would disrupt them.
Panting, her breasts swelling, she pushed her fingers into his hair. Handsome, charming and wicked, he would truly complicate things. Then why didn’t she get her butt off this table and send him on his way? Common sense told her she should. Unfortunately, it stopped working in concert with her traitorous body the moment he walked in the room. She fisted his silky and tugged.

She waited for his eyes to meet hers. “Is this going to be a mistake?”

He pulled back slightly, those beautiful baby blues drifted over her then came to settle on her lips.

“You don’t look like a mistake. You look like something I did right for a change.” His voice was husky, his bright eyes even brighter.

His hands slid upward over her waist to her rib cage. His thumbs stroked the underside of her breasts.

“Do you want me to touch you here?”

“Yes,” she confessed, pushing toward him. He pressed the pad of his thumbs flat against her nipples and began to massage slowly. All sensation focused in her core.

“Do you want more?” he asked, teasing the hardening peaks.

“Yes,” she breathed, lifting up she sealed her mouth over his.
This was desire, hot blistering desire. Nothing else mattered. If she had any doubts before, they evaporated like rain on hot asphalt and she knew in that moment, she was his and she needed to be closer...

Well acquainted with the workings of a man’s wardrobe, Shoshana slipped her index finger into his tie loop. One gentle tug, the black silk unraveled in her hand. With a playful twist of her wrist, she dropped it onto the conference table behind her.
Her approach to undressing him would’ve followed in the same teasing manner, removing each garment one piece at a time.
He had other ideas.

He swatted her hands out the way, and then proceeded to attack the buttons running down the front of her jumpsuit. He also took control of their kiss. He deepened it, his mouth moving over her with a delicious aggressiveness that had her head swimming.
He worked hurriedly, stopping occasionally to nibble at the crook of her neck, lick her clavicle and bite a bare shoulder. When the top of her garment gaped, exposing her black bra, he tugged until it lay pooled at her waist.

Koko Brown is a quintessential romance junkie, who once read over two hundred Zebra Club novels the summer before her senior year. Bitten by the writing bug at the age of nine, Koko self-published and distributed a newspaper to her fellow classmates. Not liking outside competition, her principal put her out of business after one best-selling issue. Undaunted, Koko continued to write and read everything she could get her hands on. She honed her writing skills as a staff writer for her college's newspaper and even wrote obituaries for the local newspaper. One day while daydreaming in bed Koko came up with the idea for her first erotic manuscript. In two short weeks, she fleshed out the story, cleaned it up and then sent it to Ellora's Cave. Three months later, she signed a contract for her vampire novel, Charmed.Koko lives in the great Sunshine State. She loves to travel and shop in thrift stores. Keep up with new releases by signing up for her quarterly eNewsletter: http://tinyurl.com/qh33gsy