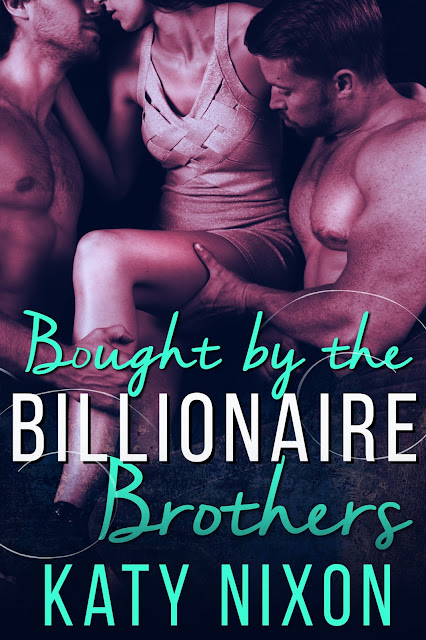 Auctioning off my innocence isn't the craziest thing I've ever done. Well, it was, until the high bidder turned out to be not one, but TWO billionaire brothers.

One's a smooth devil in a business suit, and the other is a devil-may-care bad boy. Their smirks, their voices, their touches make me feel intense, unfamiliar urges, conjuring up wild fantasies that shouldn't make me shiver--but they do.

Dominic and Jacob Stone will pay off my crippling student loans (and then some), but there's a catch. They want to catch me, and start a family!

Mister Stone—Dominic—had insisted we meet first in the lobby, as a kind of show of good faith and safety. Meeting in a public place, he’d written, was a good idea for all parties concerned in this potential transaction. With dozens of people floating in and out of the elevators of the thirty-story building, it couldn’t be much more public.

With a sigh, the guard reached for the phone. “Have a seat.” He gestured towards a leather bench.

No, thank you. I needed to stand. I needed to move. My nerves were getting the better of me, my hands cold and a little shaky despite the summer heat. If I stood, my sleeveless red sheath dress wouldn’t wrinkle. When I got up that morning, I had no idea what one wore to an interview as a… what? Mistress? No—that sounded too committed. Hymen vendor? Ugh. In the end, I decided to dress as though going to work, which was kind of true.

My heels clicked on the polished stone floor as I walked over to an abstract metal sculpture on display. It stretched nearly twenty feet in the air, shining in the morning sun bending through the floor-to-ceiling windows.
“What do you think?” a man asked behind me.

It was a beautiful piece. “Kind of delicate.” It looked like it could fall over any minute, like metal pick-up sticks piled up dangerously high.

“There’s over a thousand wire coat hangers there.”

I looked closer. “Huh.” So there was.

Swallowing hard, I turned to the voice. And looked up.

Dominic Stone stood before me, his tall, dark and handsome figure like a shadow in the sunlit lobby.

He was even hotter in person. Even if his charcoal suit came from a discount store—which it clearly didn’t—his attitude would be enough to command my attention. All those fanciful words, like charismatic, magnetic, and imposing, were all very appropriate when describing Dominic Stone.

My three-inch heels barely took me to his shoulders, and I wobbled a little as his gaze ran over me. Just when I was about to turn my ankle, his hand shot out. The feel of his muscular forearm under my fingers had the exact opposite effect of steadying me.

“Thanks.” My face burned, but I forced myself to look him in the eye. His eyes were rich, dark brown, as heady as strong coffee and gave me a similar jolt. When he tilted his head and his lips curved at the edges, I couldn’t tell if I amused him or he was just being polite.

“You are Evie, right?” His eyebrows came together in a frown.

“Yes!” I squeezed his arm, like subconsciously I thought he’d run away. But instead of shrugging me off, he used his other hand to tug my fingers down his wrist to end in a warm, tingling handshake. Both his hands were around mine, and he didn’t let go. I didn’t mind.

“It’s a pleasure to meet you,” he said smoothly. “Shall we?”

Shall we what? I blinked at him.

“Go up to my office?” He nodded toward the elevator bank. “Unless you’d feel better staying here? Or we could go get a coffee or something.”

I stared at him, the ridiculousness of this dawning on me. And then my big smart mouth got ahead of my brain. “Coffee? Does my virginity come with an espresso and a muffin?”

His laugh sounded like a sharp bark, echoing off the stone floor. My face probably matched the crimson of my dress by then. With his hands still wrapped around mine, he pulled me closer. I shivered as his warm breath caressed my bare shoulders.

“No, Evie, I’ll pay extra for the coffee. But I like it sweet and milky, not dark and bitter.”

It could have been five minutes or fifty before the car finally stopped. His ravenous kisses had depleted me of oxygen; his caresses stripped me of sense.

I looked out the window at the underground parking lot. Fluorescent lights glinted off luxury cars and allowed for no dark corners.

The car door opening startled me, piercing our hazy bubble of backseat lust.
Jacob Stone leaned his head in, his arm braced against the roof of the limo. “We’re here,” he echoed his brother’s announcement.

My mouth fell open. “Were you there the whole time?”

He smirked at me, his blue eyes blazing. “Define ‘there.’”

“Or ‘the whole time,’” Dom muttered, making my head whip around to look at him. “Out you get, Evie.”
My gaze swiveled from Dominic to Jacob. What did this mean? Both of them? Again? My insides flipped at the idea, but not in a bad way. “Out I get,” I repeated faintly.

I focused on getting out of the car without flashing anyone, before realizing that it was immaterial. The butterflies in my belly fluttered wildly as I walked between them to the elevator bank. As we rose, the weightless sensation in my body was not just due to the speedy ascent. I squeezed my thighs together. The heat of the brothers’ bodies on either side of mine both stifled and comforted me.

We were all silent as the elevator door opened directly into a massive apartment. Dom took my hand and led me into the marble-floored foyer.

“Shoes, Jake!” he reminded his brother. Jake rolled his eyes before toeing off his shoes.
I stepped out of my heels, my feet immediately soothed by the cool, hard floor.

Immediately I felt more delicate, uncertain—as though my shoes had boosted my confidence as well as my height. When I tilted my head back to look up at Dom, his large hand cradled my jaw, brushing my apprehension away with every sweep of his thumb.

Tingles. Sizzles. Vibrations. I felt them all inside me, like a fizzing candy dissolving on my tongue. Then, when Jake’s hand landed on my lower back, I reflexively arched into it.

“We got you,” he assured me as he swept my hair off my neck and dropped a kiss there.
Oh my god. I stumbled forward a little. “I can’t—not for the first time—”

There was crazy, and then there was just outright insane. No matter what secret fantasies I might have, or what smutty stories I might read in secret, I never expected my first time to be with more than one person. In the back of my head, I thought to myself, “If my daughter asks someday about my first time, I can’t tell her I got a two-for-one special!”
Jake clapped his hand over his mouth as he barked out a laugh. Oh crap. I said that part out loud. Dom glared over my head at his brother and took my hand. “You don’t have to.”
My head spun.

“Look at me, Evie.” I did. “It’s just us right now, okay? No expectations.” At my raised eyebrow, he chuckled and added, “Okay, there are some expectations, but I will never hurt you. I promise you that.”

Thirteen steps took us into a cavernous living room, where Jake flopped onto a modern leather couch. With my hand still in Dom’s, another seventeen took us down a hallway to a large bedroom filled with dark wood and creamy fabrics. The massive bed was unmade, and the curtains wide open to let the starlight in.

“I left the bathroom light on,” Dom murmured to himself. The strip of light from his ensuite stretched across the light carpet like an arrow pointing to the bed.

“Do you want to turn it off?” I asked shyly, hoping for a little more darkness to hide my body.

“Not a chance, beautiful.” He squeezed my hip. “If I had my way I’d put on every light in the place so I could see every inch of you.”

A squeak escaped me.

“But I won’t, because I want you to be comfortable.” We both smiled as our eyes met. “Well, as comfortable as this situation allows, anyhow.”

“Then keep touching me, Dom. Please touch me.” His hands made me nervous but his gaze excited me, his admiration swelling my confidence.

“Oh baby, this is just the beginning.” 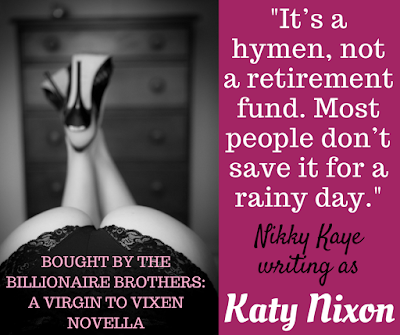 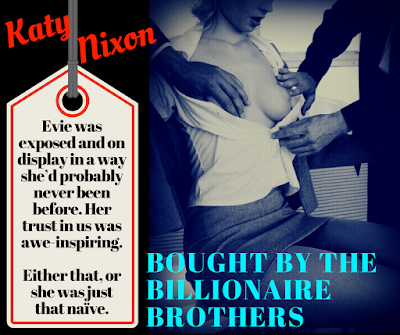 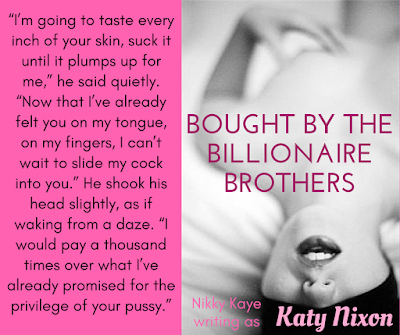 Katy Nixon is the playful alter ego of the already playful Nikky Kaye, who is the alter ego of— wait, I’m not telling you that! Damn, I’d make a terrible secret superhero. I love reading and writing funny, sexy stories. I am over-educated and under-organized, and have a terrible habit of adding more books to my Kindle than I can possibly read. My auction experience is limited to eBay and viewings at Sotheby’s and Christie’s in New York. The only double penetration I’ve had is being sandwiched in my own bed by my young twin sons. Today, the biggest risk I took was having cotton candy for dinner. And it was fucking delicious.