The Women of Spin It, Inc.Working for Lucas “Luc” Mancini’s record label is not for the faint of heart. Their lives are fast paced and filled with music, mayhem and hot men. GINGERSPIN IT: BOOK TWOShe hasn’t been Ginger “Snow” Wolfe, the daughter of the Wolfeman MC President in years. She’s DJ Gin Gin, an up and coming star in the world of underground music. She left that life... she left because of him, Micah “Shy” Jenkins. The one who built her up, only to leave her broken and bitter. He’s the ghost that has haunted her for the past three years.The glamorous life of DJ Gin Gin is fast paced. She has her music, she has her girls and is living the life she always dreamed. Nights behind the decks, hyping up the crowd and traveling the world. Then there’s Brant. Her friend, her confidant, and her protector. Her good time with no strings attached. He just broke through her walls with an off the charts chemistry she hasn’t allowed herself to feel in years.After a heroic incident leaves Ginger broken and vulnerable, she is forced to face the inevitable collide of the life she left behind and the independence she has worked so hard to build.Shy is back with a full vengeance to claim her and make her see the past isn’t what she thought it was. Brant refuses to let her go and is willing to fight for the girl he wants to claim as his own. As if this conflict wasn’t enough, drama ensues that threatens to take it all away. In the battle of the past and the present, who will win Ginger’s future? 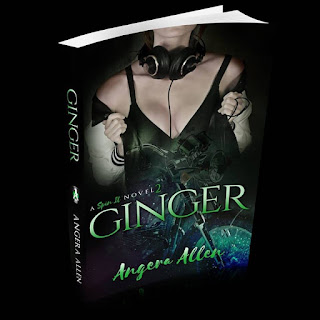 This book is part of a series and it is best to read book 1 before reading this one. Believe me you will want to read it. Its just as good as this one was. Ginger is living 2 different lives and she is stuck in the middle of them. Her life as the up and coming dj or the daughter of an mc president. Both lives are fighting for her and neither is willing to give up. But when love, old love and danger comes along, Ginger needs to make a decision.
I loved this book. It was as good as the first book and all the characters in it were well described and the backstory was well though out. The book wasn't rushed and it was very descriptive.
4 Stars
~JEN~