Bryant “Slam” Nash is known for three things…His intensity on the field,His drive to win the World Series,And scoring on the first date.Gearing up for the biggest season of his career, Slam is determined to focus on his game, calling a time out on anything considered a distraction. Including Layne Scott.Layne Scott doesn’t do complicated.Independent and focused on raising her daughter, Layne is a woman running a business dominated by men. Managing the sports bar her father left her, she has no time for the arrogant ball player who keeps strutting through her door. With chiseled good looks in baseball pants, Slam Nash is a temptation she can’t afford.Game on… 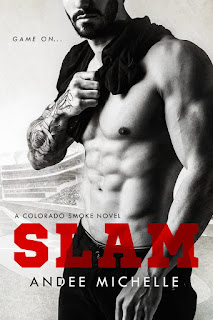 I would have wanted to read this book just on the cover alone - because wow!!! But apart from that, Imthink I just read one of the best baseball romance stories ever. I have never read a story where a dysfunctional family was just oerfect. Layne and Garrett as parents to Gracie are what separated parents should aspire to be.Then add in all that is one Bryant Nash. Yep, he almost blew it with Layne and if it wasn't for his team mate Connor and then himself seeing Layne on a date with another man, he finally decided to take a chance on a relationship with Layne.There is plenty of story with this book, not only about Bryant and Layne, but also Layne's relationship with Gracie's father and his fiancé. Then add in Layne's best friend Mandy who is an absolute hoot and I could not put this book down.Hopefully Andee will make this the start of a series as I would love to see Connor get his HEA.
5 Stars
~SHARON~