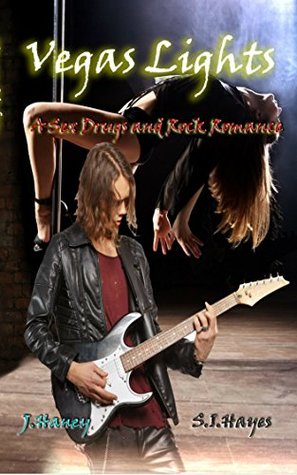 What happens in Vegas, never actually stays in Vegas…

Brent Casey aka Brent Jagger is the lead guitarist of one of the best Southern Rock bands, in the world, Fallen Angels. He’s been sober for three years when he wakes up hungover and in a bed, that isn’t his. To make matter’s worse there’s someone in bed with him, and he’s got a ring on that he doesn’t recognize. He knows quickly he’s messed up. Thinking he can just get it annulled he sneaks out of the hotel to be grabbed by his detail and shoved into his car to be taken to the airport they have a gig in Sydney, and will be gone for three months, hoping Lawyers can handle it he’s at a loss as he doesn’t even know her last name. When he finds her, he finds he’s stuck, as she burrows under his skin.

But can this mouthy, Texas girl handle the life of a Rocker? One on the brink of his addictions? Can they move past lust and find love at last?

Hell in Heels (A Sex, Drugs and Rock Romance Book 2) 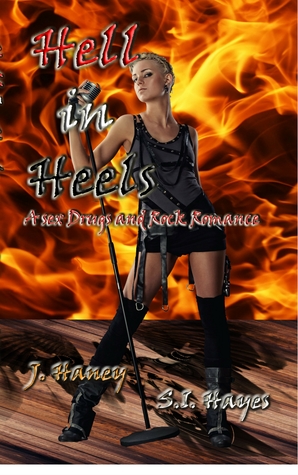 They call me a bitch, and I own that shit... My Name is Angelica Fontaine, though I’m known to the world as Angelica Joplin, the Lead Vocalist of the Southern Rock Band Fallen Angels. I’m a fireball in a tiny package but I can carry my own and take care of myself. Have been for years now. Unfortunately, a nasty bit of binging and an overdose has gotten my mates in a bit of a tizzy landing me in rehab… Again. Now it’s all let’s talk about your feelings and why you want to kill yourself. Fuck me, it wasn’t exactly on purpose. Not totally… I’ve heard that rock bottom tastes like shit, well I’ve been served a big heaping pile of it that’s for sure. The guys say I need to finish rehab and then I need to consent to a new kind of bodyguard. They are talking a full-blown MANNY!! Somebody to watch everything I do, all the time! They can’t be serious? Can they?

Tatted up and Tied down
(A Sex, Drugs and Rock Romance, #3) 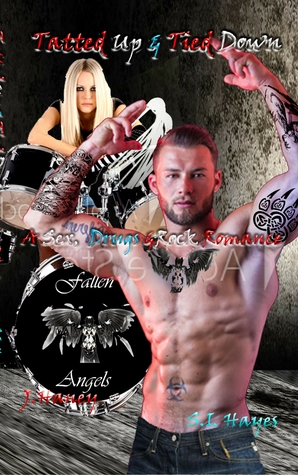 Steven Falcone aka Steve Vicious is the infamous Fallen Angels Drummer. He seems to have it all, money, a gorgeous wife, three beautiful daughters and a sexy live in girlfriend. He’s managed to take the open relationship mainstream in a world where it’s still very taboo.

Steve wants something like monogamy again, but Kellie won’t give up her Dom and Steve’s feelings for lover Crystal are more than they should be. Can the trio make heads or tails of their relationship or will his marriage of sixteen years crumble at his feet?

J Haney
I was born and raised in Kentucky. I reside in Greenup County, Kentucky with my family. My debut novel, An Unexpected Love, released August 2015. I’m a single momma to my nine-year-old daughter, Jessalyn Kristine. I also take care and homeschool my autistic cousin, Aiden Sean, he’s ten years old. I love photography and seeing what I can capture through the lens! I just started plus size modeling and have been 5 or 6 pattern covers now. Both kids model as well, I suppose you can call us “One Big Modeling Family. I’m probably the biggest book whore, I know. I love books of all genres and get excited when I’m introduced to a new author. I’m often told I act like a kid in the candy shop, which I could totally see!

-FUN FACTS-
1. Jessalyn & Aiden have to be my two most favorite people in the world!
2. I'm probably the biggest book whore there is!
3. I love music of any kind, but better yet, I love singing!
4. I hate cold/wet weather!
5. I wear at least 4 different colors at once!
6. I have the most awesome group of friends a gal can have. Jamie, Lisa, Chris, Patricia, Heather, April, Shannon, Teresa and last but certainly not least Annelle! Love you Ladies!!
7. I would love to one-day meet Alice Clayton, Christina Lauren, Kendall Ryan, Jamie McGuire, Addison Kine and so many others.
8. I’m completely addicted to Tattoos and Piercings!
9. I’m very random, and will say crazy stuff out of nowhere.
10. I can tell you every word from beginning to end of Wallbanger by Alice Clayton and One Night Series by A.M. Willard.

Are ya Stalkin’ #JHaney? No? Well then you better get on it! Check out her pages below.

From Paranormal Drama to Contemporary Romance S.I. Hayes dips her fingers deeply into the pools of literature while supporting her fellow authors and hosting several blogs and her own website. www.sihayes.com.
In her own words... I have a mind that is easily distracted and prone to wandering. Tangents are my forte, and if you think my characters are going to fit a cookie cutter shape of any kind, think again. They live, they love, they eat, sleep and f***. I believe that people are inherently sexual creatures and my characters be they human or something all together else are no exception.
I don't adhere to a single genera, I toe the line on several and wouldn't presume to be a master of any. So I suppose you could call me jack-of-all-trade-paperbacks.
I am a truth seeker, in my life, in my work. I’d apologize for it, but I kinda can't help m’self. It's my best and worse personality trait, well mostly, being Bi-Polar I guess you could say that is the worse. But I believe that the disorder has made me, well... Me.
I have taken this life and twisted, carved, shaped and molded it in to the worlds of my characters. Albeit with a chainsaw, and it has made all the difference.

Are ya Stalkin’ #JHaney? No? Well then you better get on it! Check out her pages below.