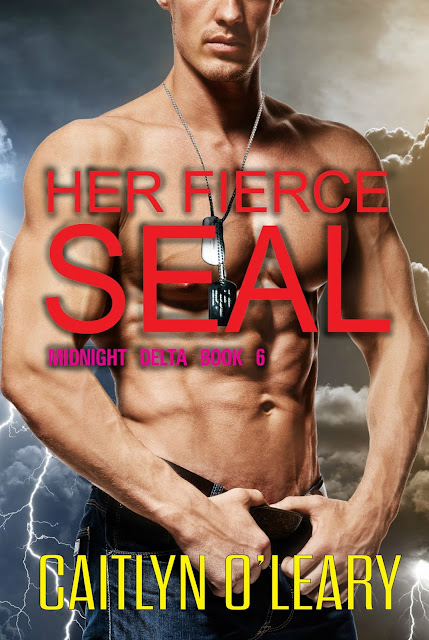 Navy SEAL, Finn Crandall, still reeling from his last mission, is desperate for a purpose to bring him the redemption he needs.

Landing in Austin Texas, he meets the feisty Angie Donatelli. She’s a private investigator on a quest to reunite a young girl with her stolen baby. Angie is tough, and doesn’t want or think that she needs help. When she’s confronted with a man who won’t take no for an answer, sparks fly and flames ignite. Angie finds herself falling for the sexiest and most stubborn man she has ever met.

When Finn and Angie team up to search for the missing baby, Finn’s fierce protective instincts kick into high gear. As they dig deeper into the baby’s disappearance, Finn’s old nightmares get tangled up with the new horrors they encounter. Will Angie’s unconditional love and Finn’s inner strength be enough to fight the demons of his past and conquer the evils they’re confronting today? 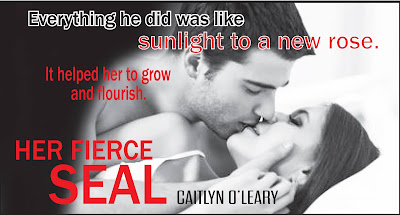 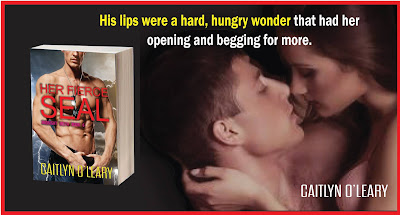 Angie stretched, and for the first time in days, it hardly hurt at all. Okay, it still hurt like a bitch, but she wasn’t going to admit it. She had plans. Admitting she was hurting was not going to get her what she wanted. She threw off the covers and meandered into the kitchen.

“That smells really good, what is it?”

Her mouth watered. She slid by him, a lot closer than necessary, to grab a water glass out of the cupboard.

“Let me get that.” He handed her the glass, and lightly touched her waist in the process.

She put her hand on top of his. “You can press harder. I’m not made of glass.” She grinned.

Finn frowned. “Are you trying to tell me you’re not in pain still? Because I’m not buying it. I’ve had broken ribs.”

“Just one rib is broken. One,” she reminded him. “And my waist is fine.”

Angie pressed her finger to his lips. “I just wanted some water.” He raised an eyebrow. “Okay, and to brush up against you. I am doing better, except my neediness level is off the chart.”

He gently cupped her hips and brought her closer. She felt his heat, his strength, his desire. She wiggled against his erection. He hissed in a breath. “My neediness level is pretty damn high too. I think it needs to be measured.”

Angie blinked, and threw back her head and laughed. He moved, thrust his fingers into her hair, and drew her in for a kiss, the likes of which she had never experienced. His lips were a hard, hungry wonder making her open and beg for more.

His tongue swirled in, and her head spun with carnal bliss. She sucked him deeper, scraping him with her teeth, enjoying the growl that sent ripples to her core. He plunged in again, and she nipped his tongue. His large hand gripped her ass causing her nipples to harden and her pussy to weep. She jerked away, her eyes wide.

“Bedroom.” Was that husky purr her voice?

Her Boy Scout kissed the top of her head and turned to make sure all the burners were off. Then she was in his arms, and he was striding to her room.

“It smells like a strawberry field in here, but I know one thing that will smell even better.” She froze. Oh, he was not going to be like any of the polite Southern-Boy lovers of her past.

He set her down beside the bed. She crossed her arms in front so she could take off her blouse.

“Faster this way.” Then she did a stupid thing and tried to hurry, wincing in pain as she pulled off her top.

“Yes, sir.” Would he stop if she saluted? No, he wouldn’t, not with the way he stared at her cleavage. Thank God for the power of boobs.

“You’ve seen me before. As a matter of fact, I wasn’t wearing a bra.”

He looked up at her and shook his head. “That can be easily rectified.” Finn unclasped her bra and peeled it down her arms. Then he knelt in front of her, and cupped both breasts, and licked a nipple. Her legs lost all strength, and she would have fallen except for his fast action. He had her lying on the bed and stripped out of her slacks and panties in under a minute.

Angie was still trembling from the one caress. He pulled his shirt off with that manly over the back, one armed tug, and she finally got to see the most gorgeous chest she had ever seen in her life. She held out her arms.

Angie still had bruising on her hip, and her ribcage was still wrapped with tape.. In no way, shape or form did it detract from her beauty. But it did make him very conscious of the fact that the formidable Angie Donatelli needed to be treated like spun glass.

“Now, Finn,” she commanded. That stopped him. What? She expected him to climb on board? What kind of lovers had she had in the past? He cupped her ankle and then trailed the backs of his fingers up the inside of her leg. Higher and higher, closer and closer to the bare mound that beckoned like a candle at midnight.

She squirmed, and parted her legs further so he was tempted, and finally he was there. Just a touch and she gasped his name. Delicate flesh he had to taste and savor. He needed this closeness like he needed his next breath. Finn nuzzled, and licked, as she shuddered and sighed. Carefully, he coaxed her over the edge, exalting in her cry of pleasure.

“Now, Finn,” she pleaded. He stepped off the bed and shucked his jeans, then grabbed a condom. He laid down beside her and gathered her close. She was trembling, and so was he. For the first time in months, he was close to finding something he needed, something clean and pure. She turned in his arms.

All pleading was gone. Her fingers traced his cheekbones. She kissed his forehead. His eyelids, his lips. She was killing him. “You’ve given me so much, Finn. You don’t see it. But I’ve never had someone stand beside me and want to protect me before.”

“I don’t understand,” he whispered. Her skin was so soft as he touched the shell of her ear.

“Of course, you don’t. Because you’re just being Finn Crandall. You’re the man I’m coming to love.” Finn froze, and had to have felt it. “Damn, too much, too soon, wasn’t it? How about the man I’m coming to lust?” She gave him a cheeky grin, and he his heart lurched. Ginger had made love a four letter word, he needed to reclaim it.

“Love, Angie. I like the word love a whole lot better. Lust is good, but love is what’s happening in this room—in this bed.”

“Then why did you tense up?”

“Bad memories. But you’re chasing them away.”

“I’m glad. Do you want to talk about it?” Her brown eyes a soft liquid brown.

He needed another kind of intimacy right then. “Later, I want this kind of love, first.” He bent down and parted her lips with his. The flavor of strawberries exploded across his senses. She stroked him with one hand, while the other pulled the condom wrapper from his hand.

“I can’t wait, I need you.” Her thumb glided over his tip, and he was close to losing it.

“Slow, I need this to last. We only have one first time, Lady, I want to savor it.”

Her breath hitched, and she kissed his chin. He brushed the arch of her brow, and gazed into her eyes. Then he stroked downward until he was once again cupping her breast, rolling her nipple to a swollen point.

“So good,” she sighed softly, was there pain in her sigh? He bent, and took the crest in his mouth, holding her gently down on the bed, and forcing her to keep still for his ministrations.

She had so much to learn. He squeezed, and she cried out. “Just lie there and enjoy this. I need to touch you, please you. I can’t stand the thought of you in pain.” He tenderly clasped her delicate flesh, loving how her breath caught.

He obliged, and then his thumb rasped over her nipple, again and again. She made a small move, and he stopped.

“I don’t like that game.” He softly grasped her nipple with his teeth, and she shrilled with pleasure as his tongue worked the nub. The moment she moved he stopped.

“There’s a part of me that is painfully achy. Painfully empty.” She smiled. He licked her nipple one last time, and then kissed her beautiful smile. She drew him in, he gloried in the closeness and realized she was right. He found the wrapper, and she helped to get the protection in place, doubling the amount of time it took with four hands attempting the task.

Their laughter filled the bedroom, then they looked at one another and realized the moment had finally come.

“I have you.” Had it ever been more important? He watched her languid expression of joy as he slowly slid home. She tried to lift, but he held her still. “Just squeeze baby.” He felt her clutch, and sweat broke out all over his body. She gave him a dazed smile as she clenched in a sweet rhythm with his every thrust.

“This is incredible,” she breathed.

“It’s you. You take my breath away, Lady.” Faster, but still careful, he moved. She gripped him tighter and made the sweetest sounds of passion. Her nails dug into his ass, as she pushed upwards, and he thrust harder and faster, loving her tight pulsing.

He watched as her eyes glazed over and she started to tremble. He continued his loving strokes, and watched as she flew, then he followed. When he came back to himself, he realized he had finally found redemption. 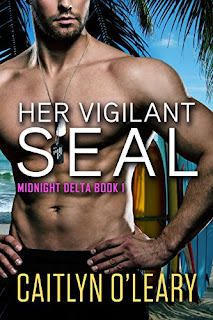 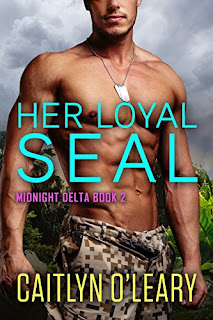 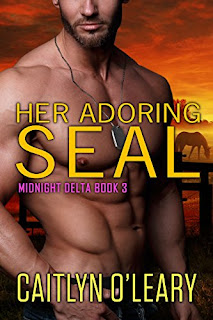 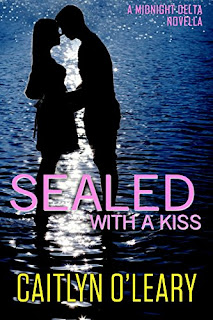 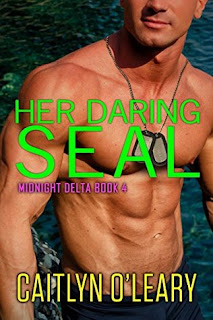 Caitlyn O’Leary is an avid reader, and considers herself a fan first and an author second. She reads a wide variety of genres, but finds herself going back to happily-ever-afters. Getting a chance to write, after years in corporate America is a dream come true. She hopes that her stories provide the kind of entertainment and escape that she has found from some of her favorite authors.

THE FOUND: It’s a bit Paranormal, a bit Sci-Fi and 100% Action/Adventure. The characters have special abilities, that make them targets.

MIDNIGHT DELTA This is focused on a group of Navy Seals. What makes them special is their bond to one another, and the women they come to love.

FATE HARBOR This is the series that started her career, it is a Menage Series that takes place in Fate Harbor Washington. It focuses on a tight knit community who live and love and care for one another.

She loves to hear from her readers. caitlyn@caitlynoleary.com 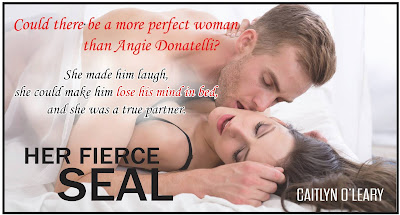