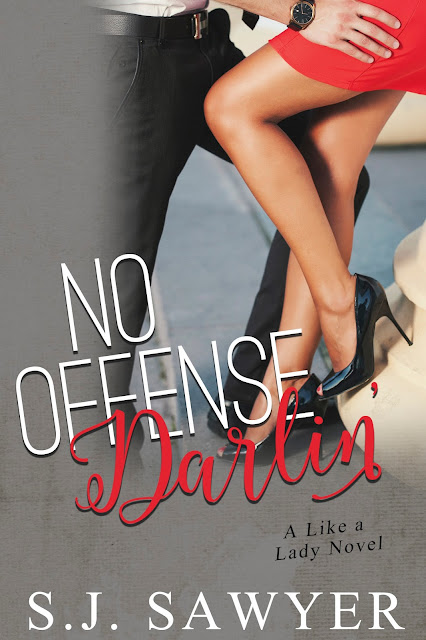 
Jake Roberson is nothing but a lying bastard. Every whisper that falls from his lips is a betrayal, but I can’t seem to convince myself to walk away. When he comes sauntering toward me, all those particulars go right out the window, and I cave. Every. Single. Time.

No more, though. I can’t. There’s too much at stake this time around, and I won’t have it.

Besides, one night with Beau, that’s all it took. I’m sunk. He was amazing in every way imaginable, and he still is. Why he likes someone like me, I can’t fathom. He’s such a good man, and he only ever sees the best in people, me included. It’s an amazing thing. The way he looks at the world, it’s like magic. Every bone, every muscle, every fiber of Beau Reed’s being is good, and he never stops proving that to me. He’s a good guy deep down in his core where it counts. I’ve always known that, even when I first met him. It’s something that radiates out from him like this big glowing light. Never have I ever met anyone like him.

But because he’s good, I have to make him go. ~Shelby

I can’t focus on anything else:
Soft, brown hair hanging in waves down to creamy skin that looks all too damned touchable.
Big eyes that could never be described with any justice, brown to green, maybe hazel, with so much vibrant light, etching them forever into memory.
Plump, smooth, kissable lips that are the stuff of fantasy, with the bottom one slightly fuller than the top, perfect.
Shelby.

It’s always Shelby, always been Shelby, and there doesn’t seem to be anything or anyone that can make that any different.

Except, now, there’s more at play than just her. For once, it’s not about Shelby Case, and despite my best efforts to save her, there’s things that I can’t rescue her from. ~Beau

NOTE: No Offense, Darlin’ is the first Like A Lady novel. While it could be read as a standalone, for the full effect of Beau and Shelby’s backstory, the Like A Lady serial should be read as a prequel to this novel. The first part of the serial, Big Girl Panties, is free. 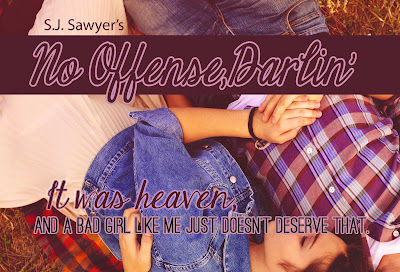 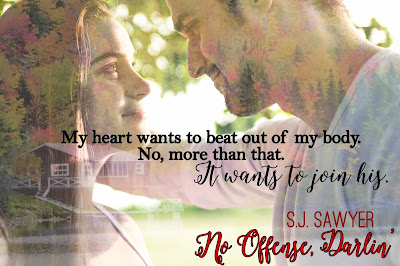 "If the heat hangs on any longer, I'm gonna move to Colorado," I tell Preston. "I'm done with it."

"Hell, it's only the first of October. We got a couple more weeks of the heat, man, and you know it. Best get used to it."

My radio goes off, scaring the daylights out of us both. Laughing, I turn the loud buzzing down a bit and listen to the dispatcher calling for me over at the bar. Of course, it's for me. It couldn't be the fire guys. Getting up from my seat, I groan, wanting to cuss, but I've been workin' on that shi- stuff. I've been watching what I say because, now I have a little niece toddling around repeating everything, my mom is gonna end up beating my backside if I don't. One tiny shit or hell slips off her sweet lips, and we'll all get our mouths washed out with lye soap.

"I guess I gotta go," I tell him, grabbing my takeout cup and cookies off the table between us. "I'll talk to you tomorrow. Nothin' good ever happens on college night out at Rowdy's."

"Alright. Let me know about fishing in the morning. I won't wait around forever."

Shaking my head, because I know he'll wait as long as I dam- dang well please, I head out of Subway, with a groan for all the stupid people in this town. The only thing to do around here on a weekend night is go to the bar or party in a pasture. We don't have a theater or bowling alley in town. Heck, we barely have a restaurant that stays open past nine. Thursdays start the weekend early, offering up dollar beer to the college kids. It wouldn't be so bad except all the rednecks around this place, including my brother Carl, act like idiots, thinking they are twenty-one, again. They can't handle their beer, dang sure not their liquor, and it ends up in a huge, messy brawl. The whole thing is like clockwork, every single weekend.

The Tahoe is parked right out in front of the restaurant for ease of access, not that much occurs around Freemont except traffic violations, the occasional wreck, and domestics. Getting inside, I buckle up before flipping on the lights. The blue and reds light up the night, and several high school kids get into their vehicles. Instead of racing out to Rowdy's, I take my time, careful of all the sixteen year olds. They've been loitering about since before I got here for dinner. It’s not a school night, thanks to the county-wide teacher's meeting tomorrow, but it's the least of my issues, apparently. They know better, though, because the owner is gonna complain about it on Monday, and then, I'll be forced to give them grief next weekend.

Calling in to Liz, I laugh when she sighs, dramatically. "What's goin' on out there, tonight?" I ask.

"I'm not real sure. Domestic disturbance of some kind," she tells me, boredom soaking her every word. "I figure some drunk asshole beat up his old lady."

"I'm bettin' bar fight over a pretty girl. What are we wagering?"

"What the heck is the city payin' you? I'm broke, like livin' on some dang noodles broke, and here you are wagering ten? Five."

"Fine. Five it is, but you're doing this cause you know I'm going to win."

"We'll see," I laugh. Pulling into the rough parking lot, I park up front, watching as people scatter to the four corners. "I'm here, now. Talk to ya in a bit."

She says it like I'm not always safe. I mean, when have I ever given anyone the idea I wouldn't be a hundred and ten percent, vest-wearing careful? I'm always careful. Well, most of the time, I'm careful. Sometimes.

Getting out of the car, I slam the door. The owner, Jeff, comes running over to me before I can even take a step in his direction. All six foot, three hundred pounds of him is barreling toward me at a speed I wasn't sure he possessed, and quite honestly, I'm scared for my freaking life. I take a step back, just in case, but he stops short, waving for me to follow him toward the bar's front door.

He shakes his head. "I don't know what got into the fool girl's head. I tell ya, she's off her rocker, Beau. Don't know what she was thinking, bringing trouble like this around here."

Ahh, there's always a girl, usually a sorta pretty one. Why is it always over a dang girl? Men do the stupidest sh- stuff over them. It's something that's hard wired into us, imbedded inside our DNA.

"Slow down. What exactly happened?"

Roger, a regular out here, holds the door open for Jeff and me. We both walk in like we own the place, and looking around, I don't see anything out of the ordinary. The lights are still mostly in place in their ancient fixtures, the bar stools are intact, and there doesn't seem to be any broken glass or pool sticks. I worked the Halloween Brawl. It occurred my first week on the PD and was some scary sh- stuff. It was bad, real bad, but this...well, it doesn't look like that at all. Inside Rowdy's, it looks like an extremely slow night, but Jeff doesn't stop inside. He walks straight through the bar, down the hall by his office, and out the back. I follow along, thoroughly confused.

"She's out here, Beau. I dunno what you are gonna do about it."

There's no need to finish the sentence. I know exactly what he's talking about, and suddenly, I wish it were Mike, Cliff, Jared, or anyone's night to work this except mine. Why did it hafta be me?

"What's going on out here?" I ask, directing my question to Jake Roberson. "Jeff says we have a problem."

"Damn right we have a problem, Beau! Goddamn!" he yells back. He’s pacing back and forth, as if there’s too much energy inside him to be contained. "The stupid cunt is out of her damned head! What the hell was she thinking? She took a fucking baseball bat to my brand new truck! My brand new truck! You have to do something. Haul her ass in!"

Now, here's the story. I don't like Jake Roberson, not even a little bit, not at all. The way I see it, he's screwed over one too many people in his two decades on this planet, and I figure he deserves about anything he gets. Even as a kid, he was a brat. Spoiled to the core. I've never known him to have a bit of niceness in his body. His parents have raised him to feel entitled, but best I can tell, there's nothing all too special about him. He's a lazy son of a bi- jerk, lives off his daddy's money, and has managed to skate through life on his family name.

"Now, slow down. What are we talkin’ about?"

"You might as well go ahead and arrest me, take me to a cell. There's no arguing with the high and mighty Roberson family."

Jake jumps toward the soft voice behind me, lunging. His buddy Grayson pulls him back by his shirttail. He's yelling at him to keep his cool, telling him he needs to keep his nose clean, but Jake is pissed and it shows. Turning, I look into the semi-darkness behind me, hunting for the face I know is there. The poor lighting hides a beautiful set of hazel eyes, but the face is there, looking good and furious. It's like she's daring me to take her up on her words.

She should know I never back down from a challenge. 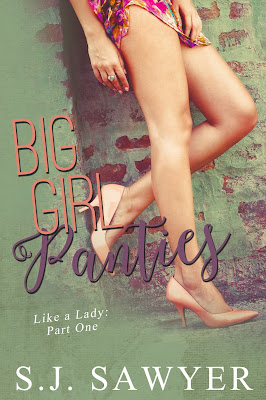 Get part one in the Like A Lady series for FREE 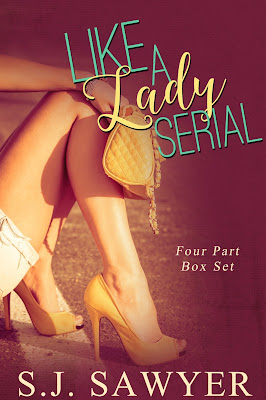 Twenty-something, Okie girl S.J. Sawyer enjoys creating the best book-boyfriends in a mix of romance, humor, and reality, loving her heroes swoon-worthy and stubborn. Author of the Sealed series and Like A Lady serial, writing new adult, romantic comedy, and contemporary romance. Mom of three; wife of one. Graduate of SOSU with a Bachelor’s degree in English Lit. Lover of books, young and old. Sucker for the happy ending. 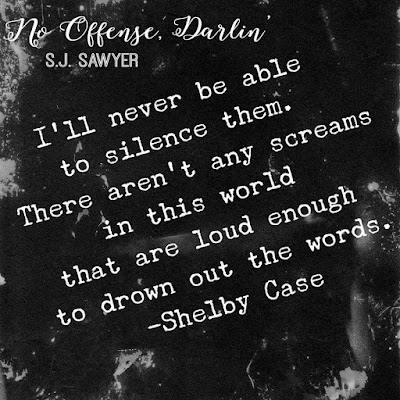