I used to have everything. Then my everything was ripped away from me. Now, instead of the warmth of his love, I feel the coldness of his loss. The darkness that remains in me is frightening.

I don't want to feel anything. The cold has a nice numbing effect. I've decided to embrace it. I've also decided that even though I no longer feel, I do still need. I need to bind, flog, and Dominate younger men.

Especially one in particular. I know he thinks he can change me. Thaw my frozen heart. He cries so beautifully for me; I could almost believe in love again. But I could never love another man the way I did my husband and Master. Not even my eager young submissive. He will never be my love...only my Plaything. 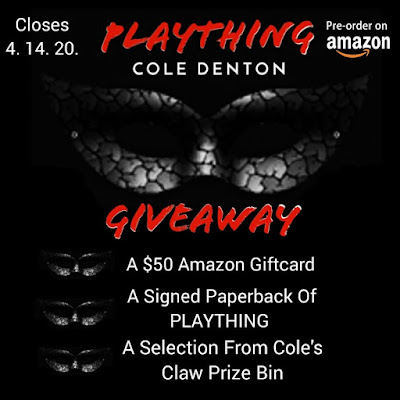 Cole Denton is an ocean lover who finds joy in almost all physical activities. He is especially passionate about baseball and surfing, indulging in them every chance he gets.

His other passion is writing. It began at a young age and followed him through to his time at a university in SoCal where he majored in screenwriting.

After moving to Sin City itself, Cole has put his knowledge and talent as a writer to work by pursuing a career as a dark fiction author. Cole is enjoying testing his kinky side, in pursuit of all things pleasurable.