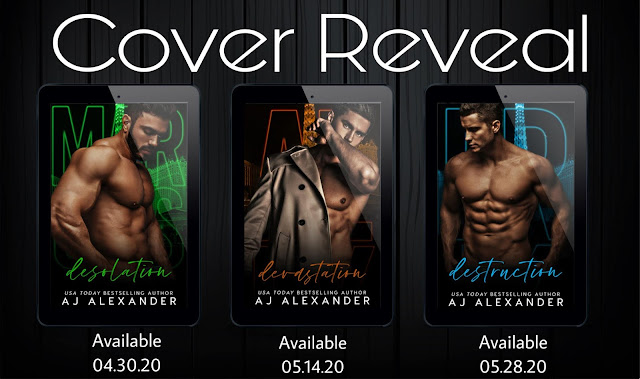 noun
1. a state of complete emptiness or destruction.
2. anguished misery or loneliness.

Before La Famiglia gave me purpose, desolation ruled my existence. Pain was my constant companion until I met Francessca Giordano - the Boss's daughter.

My mission is to protect her, at any cost.

With a price on her head, I will tear down heaven and hell to protect what's mine.

Being the next head of La Famiglia strikes fear in everyone around me - except Penelope Star.

She's worked her way beneath my hard-as-nails exterior and now, one look from her sends my carefully constructed walls crumbling to the ground. If we're not careful, our secret will be my undoing.

When she's taken, I learn the true meaning of the word devastation. I will cleanse the city of sin one by one to defend La Famiglia, but to protect her ... I'll burn it all to ash.

noun
1. the action or process of causing so much damage to something that it no longer exists or cannot be repaired.
2. cause of someone's ruin.

I live my life as a contract killer for La Famiglia by three rules: Get In. Get the Kill. Get Out.

Until one mark, Tatiana Petrov, complicates everything.

She has known nothing but pain her entire life, and when she comes face to face with death; she's ready -- but I'm not.

Before her, my life was only death and destruction, saving her could be my ruin.